Is America’s Mind-set the Greatest Threat to Its Future? 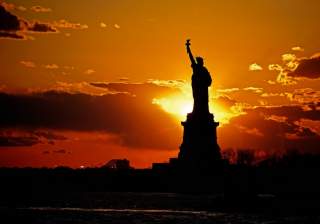 Nye suggests that the greatest threat to U.S. influence may not be debt, political gridlock, or even the resurgence of China, but America’s own psychology. Near the end of his book, he identifies two scenarios that could cause it to enter “absolute” decline, which he defines as Roman-style “domestic deterioration or decay”: “the United States becomes too fearful and overreacts to terrorist attacks by closing inwards,” or it overreacts “by becoming overcommitted and waste blood and treasure as it did in Vietnam and Iraq.”

America’s reaction to the progression of the China-led Asian Infrastructure Investment Bank (AIIB) suggests that Nye’s concern is justified. The AIIB is a fledgling enterprise, after all, not an imminent challenge to global economic governance, and it responds to a pressing global need for high-quality infrastructure. The United States should have welcomed the institution and asked to play a role in shaping its norms and arrangements. By lobbying vigorously against it—only to see 57 countries sign up as founding members, including close allies—the United States inflated the Bank’s strategic significance and compounded the apprehensions of its Asian-Pacific allies that it seeks to thwart China’s continued economic rise.

America’s comprehensive national power will long surpass China’s. If, however, the United States reacts defensively to every indicator of Chinese progress, failing to discern between Chinese actions that compromise vital U.S. interests and those that do not, it will distort the magnitude of the Chinese challenge and render itself more susceptible to making the sorts of miscalculations that have precipitated great-power conflicts in the past. How the United States handles the continued ascent of a country that proclaims its own exceptionalism will be a multi-generation, perhaps even multi-century, litmus test of its psychology. Two others come to mind:

·           The application of military force, the asset in which the United States has the greatest comparative advantage, is producing diminishing strategic returns.  After nearly 15 years of principally U.S. efforts in Iraq and Afghanistan, those two countries’ prospects are highly uncertain. The global terrorist threat continues to diffuse—and, in certain quarters, metastasize—despite an intensified campaign of U.S. drone strikes (Reuters reports that the United States carried out 2,320 strikes against the Islamic State of Iraq and the Levant (ISIL) between August 8 and March 12). Will the United States double down on its application of conventional military power, or will it make greater use of diplomacy and geoeconomics? As it emerges that the United States is playing more of a role in supporting Saudi Arabian strikes against Houthi rebels in Yemen, and given extant pressure by some policymakers to deploy troops against ISIL and/or bomb nuclear facilities in Iran, the United States must guard against getting dragged back into Middle Eastern quicksand. Nye argues that because “revolutions [in the region] may last another generation, smart application of force will be essential….a Kennan-like policy of containment may have more promise than efforts to occupy and control.”

·           Some of the principal challenges to regional orders across the world are incremental, not existential: consider Iran’s nuclear odyssey, Russia’s slow-drop incursion into Ukraine, and China’s “salami-slicing” campaign in the South China Sea. The dilemma: opposing them without precipitating an escalatory spiral from which there would be no easy avenue of extrication. Will the United States convince itself of its impotence if it is unable to win quick, decisive victories or if it goes through occasional rough patches of strategic setbacks?

The balance of power has always been in flux; so, too, have the contours of world order; and so, too, has the nature of the challenges that that order poses to U.S. interests. The United States has always adapted—even if sometimes clumsily—and, in view of its prodigious resources, there is no reason why it cannot do so again. It is ironic that perhaps the most sensible advice in this regard comes from the most famous declinist, Paul Kennedy: in his 1987 classic The Rise and Fall of the Great Powers, he concluded that “the only serious threat to the real interests of the United States can come from a failure to adjust sensibly to the newer world order.” Here’s to hoping that the United States heeds that judgment.

Ali Wyne is a contributing analyst at Wikistrat and a global fellow at the Project for the Study of the 21st Century. He is a coauthor of Lee Kuan Yew: The Grand Master’s Insights on China, the United States, and the World (2013).