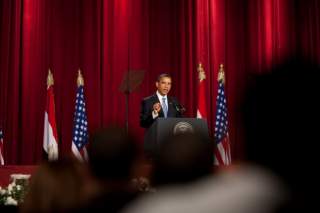 Iraqi Prime Minister Nouri al-Maliki must be pretty unhappy with the United States.  Facing an existential threat to his country and a political threat to his leadership, Maliki has to contend at the same time with a disenchanted patron in Washington responding much more weakly than he prefers to the former challenge and not at all to the latter (if not offering tacit encouragement to some of Maliki’s political rivals).  So, predictably, he is turning elsewhere for support and to limit his dependence on American help.  Enter Russia, Iran, and Syria.

Moscow likely enjoys the opportunity to provide Su-25 ground attack fighters—even if they are used and aging aircraft—at a time when U.S. officials are perversely stating that the ongoing instability may further delay Iraq’s receipt of U.S. F-16 fighters (and when Maliki has openly expressed frustration with slow U.S. deliveries, saying that Iraq was “deluded”).  In addition to shipping the planes, Russia has also sent technicians, who must presumably start by assembling the jets, readying them to fly, and offering a refresher course to Iraqi pilots who probably have not flown Su-25s for some time.

For its part, Iran appears to be both providing military supplies and sharing intelligence from drones operating in Iraq, according to U.S. officials.  Looking ahead, a top Iraqi parliamentarian and Maliki ally has warned that Baghdad may “need Iranian strikes” on ISIS in Iraq if the U.S. does not conduct air attacks itself. Syria is of course aggressively fighting the militants on its own territory and has recently launched its own airstrikes against them across the border into Iraq.  Maliki expressed appreciation for the Syrian attacks, saying “they carry out their strikes and we carry out ours and the final winners are our two countries.”

Notwithstanding a variety of differences in priorities and preferences, Russia, Iran and Syria all oppose the Sunni extremists seeking to bring Maliki down and support a unified Iraq.  Likewise, while all are constrained by limited capabilities, they face few domestic obstacles in aiding Maliki’s government—political, legal or otherwise—and are much closer to Iraq than the United States, which makes the crisis more important for them.  Distance has also helped Iran and Syria to act fairly quickly.  It is still unclear whether the three governments are acting with any coordination, however.  If so, it is probably general and strategic rather than specific and tactical—at least so far.

What is perhaps bizarre to contemplate for most Americans is that the combined Russian, Iranian and Syrian broadly align with U.S. goals—though Maliki’s unwillingness to change his sectarian approach to governance creates bigger problems in Washington than any of the other three capitals and there are other differences as well.  Also notable is the clear reluctance of America’s treaty partners to get involved.  British Prime Minister David Cameron has argued in the House of Commons that the instability in Iraq could “come back and hit us at home” if ignored, but has so far fallen well short of suggesting a military role for the United Kingdom.  German Chancellor Angela Merkel has sidestepped the crisis, helpfully saying that the United States has a “special responsibility” in Iraq but apparently seeing little role for Berlin (which was skeptical from the beginning).  Though rhetorically hawkish on Ukraine, NATO Secretary-General Anders Fogh Rasmussen sees no role for the Alliance in Iraq.

The Iraq crisis is, of course, a particular test for President Barack Obama and his efforts to articulate a new national security doctrine for the United States (which less charitable observers could alternatively see as an effort to establish a veneer of intellectual legitimacy for his desire to concentrate on “nation-building at home” without too many foreign distractions).

Speaking at the commencement ceremony at West Point earlier this year, Mr. Obama said that “the United States will use military force, unilaterally if necessary, when our core interests demand it—when our people are threatened, when our livelihoods are at stake, when the security of our allies is in danger,” he said.  “On the other hand,” he continued, “when issues of global concern do not pose a direct threat to the United States, when such issues are at stake—when crises arise that stir our conscience or push the world in a more dangerous direction but do not directly threaten us—then the threshold for military action must be higher.  In such circumstances, we should not go it alone.  Instead, we must mobilize allies and partners to take collective action.”

So far, Mr. Obama has seemed to follow this approach in Iraq, at least in the sense that his threshold for military action appears quite high.  His problem, however, is that U.S. allies and partners are much less interested in getting involved than are Russia, Iran and Syria.  They may not be taking “collective action”—at this point, at least, it looks more like loosely-coordinated parallel action—but they are doing more than anyone else.  Reflecting on former President George W. Bush’s famous assertion that our interests and our values are identical, the contrast between our allies and the Russia-Iran-Syria alignment on Iraq should make clear that they are not.  In fairness, it is no small challenge to some academic realists either; “offshore balancing” via allies and regional powers is less emotionally satisfying when conducted by Moscow, Tehran and Damascus.  More important, it is not without regional political consequences.

Still unclear is whether President Obama’s cautious engagement in responding to widespread gains by extremist Islamist militants in Iraq and their freshly announced Islamic State will succeed.  True to form, the President seems to be trying to find the halfway point between doing enough to avoid criticism for passivity, on one hand, and doing sufficiently little to avoid public anger over a new international military commitment, on the other.  Appearing similarly conflicted, senior U.S. military commanders seem to want to avoid asking much more of their tired force but also to avoid allowing deteriorating conditions in Iraq to take the meaning from their earlier sacrifices.  The end result looks like a combination of modest urgent steps with deliberate study and possible further action—the favored policy of timid politicians and gradualist bureaucracies worldwide, because it is reassuringly judicious.  Hopefully—with the help of our enemies’ enemies—it will be enough.