America’s Next 5 Moves in the Indo-Pacific Region 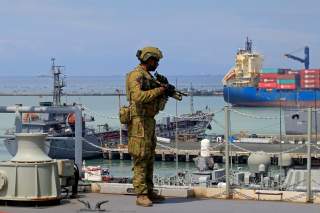 Obama talked of pivoting to Asia. Donald Trump made Asia pivot to America.

In the last two years, Trump has done much to increase U.S. influence in the Indo-Pacific region. But much more needs doing. A fast start is well and good, the Indo-Pacific contest is a marathon, not a sprint.

For sure, the Trump team stumbled out of the blocks, making U.S. policy a question mark for most of Asia. Many read the White House rejection of the Trans-Pacific Partnership (TPP) as a signal of disengagement. To be fair to the administration, TPP was already dead on arrival. During the presidential campaign, Hillary Clinton had announced that said she wouldn’t endorse the trade agreement. And Congress had sent clear signals it wouldn’t pass enabling legislation. But while Trump simply buried a corpse, he failed to promise to replace it with a better deal.

On the other hand, the administration was crystal clear on U.S. national security strategy. Washington had no intention of ceding space in Asia. Later, the United States joined liked-minded nations in endorsing the concept of a “free and open Indo-Pacific.” Any objective assessment had to conclude that America was in anything but withdrawal mode.

In August 2017, the president announced the strategy for Afghanistan. The United States would continue to support the Afghan people as it pursued two important self-interests: ensure the country did not again become a sanctuary and platform for transnational terrorism, and make certain the conflict did not become a source of regional instability in South Asia. That was a sound course of action. While the consequences of ongoing negotiations with the Taliban and adjusting the U.S. military footprint remain to be seen, these actions are being undertaken in the context of the existing strategy. That’s a wise course the United States will likely stay on.

The United States had two core interests in relation to North Korea: prevent a war in Northeast Asia, and protect the U.S. homeland against nuclear blackmail or attack by the DPRK. In pursuit of these interests, the administration put in place a pressure campaign—a mix of nuclear and conventional deterrence, missile defense and heavy sanctioning. In addition, the administration opened a diplomatic track offering to normalize relations in exchange for denuclearization.

The outcome these negotiations remains an open question. As long as the United States keeps the pressure campaign in place, however, our interests are protected. For sure, much work needs to be done on the diplomatic front. But if “full and fully verifiable denuclearization” is achieved, it will mark a significant advancement of peace and security in Northeast Asia.

Without question, however, the key focus of U.S. Indo-Pacific strategy has become China. The traditional U.S. approach was, where possible, to look for areas to accommodate and cooperate with Beijing and avoid confrontation. Trump flipped that approach on its head. The United States now consciously seeks points of contention across the military, security, diplomatic and economic spectrum. It has conducted freedom of navigation exercises in the South China Sea; confronted Beijing with tariffs, demanded serious trade negotiations and criticized China’s major international undertaking, the Belt and Road Initiative. By challenging China in these ways, the administration aims to force Beijing to recognize Washington’s interests and thus achieve a more stable relationship between the two powers.

The next iteration of American strategy needs to pick up where the last couple of years have left off. Without undercutting the energy and emphasis current strategy places on protecting U.S. interests in Europe and the Middle East, Washington needs to ratchet-up its game in the Indo-Pacific region and send a powerful message that Beijing is in a long-term competition it simply cannot win.

Here are the key next moves to make.

Make More Friends in the Hood

Managing China in a way that protects American interests and upholds the common values all nations should respect can’t be done without the U.S. But we can’t do it alone. We need strong alliances and strategic partnerships in the region. We need to do more, and our friends need to do more. We’ve got a couple cost-sharing arrangements coming due with our biggest allies in the region—Japan and South Korea. Washington must approach those negotiations constructively. Then there are countries (such as Bangladesh) that won’t be our partners, but would like more presence of the United States and allies to balance Beijing. That’s important. Some of these states—such as the Pacific Island nations—are quite small, but strategically important. We also need to engage powers from outside the region, like the Europeans, who have a fair amount of presence but little strategy to meet our obvious common objectives.

We will never have a Pacific NATO, and we don’t need one. But what is in place now is not enough. The ASEAN-led system is fine. We should respect it—if for no other reason than that many of the countries we seek to work with value it, and when we disrespect it, others (i.e., China) step in to demonstrate the contrast. But we can’t count on ASEAN. The Quad (Australia, India, Japan and the United States) provides an important overarching informal network. That should viewed as the capstone of a matrix of trilateral frameworks and bilateral 2+2 (defense and foreign secretary discussions). That’s enough to achieve the critical synergies needed, like building common maritime situational awareness.

The United States has to be out front, encouraging economic liberalization in the region across all sectors—goods, services and investment. We can do that through bilateral arrangements, if the administration and Congress prefer to go that route. This puts an especially high priority on moving forward with a U.S.-Japan agreement and an agreement with Taiwan, as well as looking for other partners. It also makes engagement with and reform of the WTO a high priority. Issues like China’s 5G push or its Belt and Road Initiative pose legitimate risks to U.S. interests and national defense. But in addressing these issues, we must be careful not to constrain economic freedom beyond what is narrowly required for our security. Looking out long term, do we want a world made up of competing mercantilist countries essentially at war with one another, or one characterized by free exchange and peace?

In the Indo-Pacific region, there should be two—Taiwan and India. These are needed to send a very pointed message to China. Taiwan is the canary in the coal mine. The threat it faces from China across domains—security, diplomatic and economic—has intensified over the last couple of years. In this fortieth year of the Taiwan Relations Act, we need to help it defend itself and be in a position to make its own decisions about the future. That means selling Taiwan the weapons it needs for defense and supporting it diplomatically. If Taiwan cannot depend on the United States, no one can. India is the most important long-term non-ally in the region. Things move slowly with India, but taking stock of our common interests and projecting out, there is a huge upside in the relationship for both countries and for regional stability. We may never call India an official “ally,” but that is really beside the point. There won’t be a free and open Indo-Pacific if India and the United States are not strategic partners.

While he was secretary of defense, Jim Mattis instituted a concept he called “Dynamic Force Deployment.” The aim was to develop better means to move limited forces quickly to where they are required. That is not going to cut it in the Indo-Pacific region. U.S. forces are inadequate to cover the required global footprint, and China knows it. The only step that will impress Beijing is if the United States builds out its capacity to push more capability into the theater. What’s reasonable and achievable? The list would include: forward basing more submarines in Guam; investing in attack submarines at the maximum rate; investing in a long-range strike stealth drone that can be launched off a carrier; re-establishing a presence in Thailand as a warm base for U.S. airpower; and buying a land-based, anti-ship cruise missile and fielding ground units with the capability to use them. We should also be fielding mobile anti-submarine warfare capabilities. Having SM-6, LRASM or TACTOM deployed on mobile ground launchers would also send a strong message.