America’s Past Three Decades of Prosperity Were Fueled by Debt 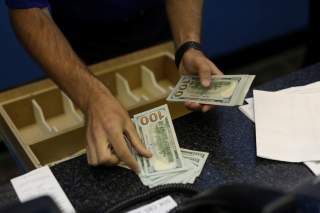 Income inequality is a long four-letter word, and not without reason. But America’s economic boom of the 1990s and early 2000s might never have happened without it. (Or, if it did, it would have looked and felt much different.) Why? The desire to “keep up with the Joneses” is an impulse exacerbated by income inequality, and it plays an integral role in economic behavior.

Research conducted by Robert Frank shows people tend to judge their own relative well-being in comparison to those closest to them in proximity, and those directly above them economically. For those in the middle class, keeping up with the Joneses’ means attempting to match the gains of the upper-middle class. Frank coins this phenomenon “expenditure cascades.”

That task has become increasingly difficult in the context of a well-known stagnation of “real,” or inflation adjusted, wages. Data from the U.S. Bureau of Labor Statistics shows that real wages grew about 3 percent from the first quarter of 1979 to the fourth quarter of 2017. Those are cumulative gains—not annualized ones, and are only positive because of a relatively recent uptick in real earnings.

While the U.S. middle class has seen little wage growth over the past three decades, the upper middle and upper classes have enjoyed significant increases in their real incomes. In a study from 2016, the Congressional Research Service found the rise in inequality was due to the growth in wages for top earners.

For the majority of Americans, keeping up with the Joneses required taking on debt to maintain consumption and compensate for a lack of real wage growth. Middle class people borrowed money to maintain the lifestyles to which they had become accustomed.

Critically, members of the middle class were attempting to keep pace with the upper-middle class and the strata of people only slightly better off than themselves. Since most of the economic benefits of the prior couple decades accrued directly (or indirectly) to the people above them, keeping up with them required ever more borrowing.

How much accrued to those at the top? Data from the U.S. Bureau of the Census indicates that a common measure of income inequality, the Gini coefficient, climbed to .48 in 2016 (for reference, 0 is perfect income equality and 1 is perfect inequality). The United States’ gini coefficient has been steadily increasing since the late 1960, and is not far from a reading above .50, which is considered high.

Perpetually low interest rates helped make the debt serviceable, and skyrocketing housing prices furthered the ability of those with stagnant real wages to pursue their better-off brethren by leveraging a never-ending stream of home equity. After all, even though consumer credit is more than $3.8 trillion (an all-time high), and amount of money it takes to service that debt is nowhere near peak levels.

Not only did the keeping up with the Joneses prop up consumption for the middle class, but the additional spending also increased employment, staving off more detrimental effects from a lack of wage growth. Without the boom in credit to keep the middle class machine going, it is likely that a combination of stagnant wages and higher unemployment would have curtailed, or even eliminated, America’s vaunted boom in the 1990s. Consumption would have been more restrained, a housing bubble would have been far less likely, and the Great Moderation (the period of stable growth and temperate inflation beginning in the mid-1980s) may well have been remembered as the Great Stagnation.

The economic theory surrounding the use of debt to maintain a lifestyle has been around since the late 1940s, but it was largely ignored until the Great Recession inspired economists to go searching through the rubble of their occupation. The idea that people would compensate for real losses in consumption by increasing their leverage should not have been surprising. But to most economists, it was.

Since borrowing to consume implies a lack of savings, it comes at the cost of savings for retirement and college. The U.S. savings rate has declined from 10 percent in the 1970s and 80s to  the 2.5 percent to the low 3 percent range of today. This “borrow-to-keep up” mentality can help explain a range of current problems facing the American middle class—for example, the explosion of student debt.

With households needing to borrow to finance their current consumption, saving for college has become an afterthought. Family budgets are too stretched for parents to assist in defraying the cost. Again, this is a result of the keeping up the Joneses. Research from Saez and Zucman finds that the savings rate fell for bottom 99 percent, but the top 1 percent did not change theirs much at all.

In retrospect, it is possible that a giant borrowing spree and massive housing bubble were not the root of the problem that caused the Great Recession. Instead, they were the side effect of stagnant wages being compensated for through a debt binge.

That is not an excuse, but rather a recognition that there are indeed consequences, both harmful and constructive, to increases in income inequality. If the United States had avoided the wage stagnation of the middle class (and the concomitant increased income inequality), would America have suffered the Great Recession? That is a great question. But without the build-up in middle class debt to consume ratio, there would not have been a boom either.

If the trends in inequality were to reverse, it is likely the “keeping up with the Joneses’” effect would unwind as well. This would likely mean that America’s near 0 percent savings rate would pick back up, and that higher savings would alleviate some of the pressure around college debt, retirement and possibly even the current account deficit. That does not sound all bad.

But the amount of savings and deleveraging that would ensue from a reversal of the Joneses effect would likely spark a recession, or worse. If the United States truly wants to jolt the middle class out of its stagnant wage slump and reduce inequality, it should be prepared for a reversal in the economic outcomes that have prevailed for the better part of three decades.

Image: A teller is counting money before betting opens to the public at Monmouth Park Sports Book by William Hill, ahead of the opening of the first day of legal betting on sports in Oceanport, New Jersey, U.S., June 14, 2018. REUTERS/Mike Segar