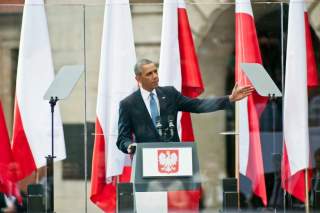 Polish ambassador Ryszard Schnepf has a tough job: making nice with American officials after his boss in Warsaw, Foreign Minister Radoslaw Sikorski, indiscreetly denounced Poland’s alliance with America as “worthless.” In the ambassador’s response to my earlier article, he made a convincing case that Poles and Americans are friends. He was decidedly less successful in explaining why Washington should extend a security guarantee to Warsaw, putting U.S. citizens at risk in the war that might result.

NATO is a military alliance, or at least purports to be one. True, in the aftermath of the Cold War, American policy makers treated the organization like a venerable social club. When a bunch of old friends showed up after the Iron Curtain collapsed, the decent course seemed to be to invite them to join.

It was an expensive process—the United States ended up paying to refurbish their militaries, for instance. But in the case of Poland, there were “long historical ties filled with friendship and mutual trust,” as Ambassador Schnepf put it, so it would have seemed churlish to object.

Notably absent from the discussion at the time was consideration of the most important characteristic of military alliances: a willingness to go to war. In the euphoria of the moment, that possibility was simply assumed away. In fact, NATO officials were searching their imaginations for new justifications for an organization that had fulfilled its three-fold purpose as expressed by Lord Ismay: “to keep the Russians out, the Americans in, and the Germans down.” The alliance’s new objective looked more like socializing the unsophisticated rustics from Eastern Europe than defending them from anyone.

However, Vladimir Putin’s Crimean adventure set off fevered demands from NATO’s newer members for the alliance to return to its old purpose. Forget the social club. They want the alliance to flaunt Article 5, develop war plans and deploy troops, particularly U.S. personnel, along their borders with Russia. Polish officials, including Minister Sikorski, have been particularly insistent that the U.S. put its full military faith and credit on the line for Poland. “Reassurance” has become the operative word.

The advantage of this approach for Poland is obvious. But the benefits for America are not. “Friendship and mutual trust” are not the same as strategic interest. Poland never has been vital for U.S. security, even during the Cold War. With Russia as a far-lesser threat to America—Moscow has reverted to a Great Power, interested in border security and respect, rather than a hegemonic competitor, dedicated to global domination—Poland’s military relevance for Washington is even less today. Nothing Ambassador Schnepf wrote suggested otherwise.

There’s that wonderful history, of course, with such celebrated figures as “Kosciuszko and Pulaski who aided Washington in the American Revolution.” But U.S. support for Poland’s transformation surely paid that debt. Anyway, the memory is no justification for Washington going head-to-head with a nuclear power, if necessary, more than two centuries later.

There were Polish troops in World War II, because their country had been invaded by two totalitarian powers. Their presence wasn’t a present for America. More recently, Polish personnel have served “responding to the challenges faced by the global community, such as humanitarian disasters or terrorist threats.” Presumably Warsaw took those stands for the same reason as did other nations, to serve the “global community,” and not as a pay-off for an American defense guarantee.

If Poland did act for more self-interested reasons, the United States still got by far the worse end of the deal. Warsaw provided marginal aid in wars that America should not have fought. In exchange, Washington is supposed to prepare for global war with the Russians. The United States is the ultimate guarantor of NATO’s commitments, expected to provide the vast bulk of conventional military resources in any real war and respond to any nuclear escalation. Put crudely, in the worst-case scenario, America is expected to be willing to trade Washington for Warsaw.

Yet the Polish government seems to assume a sense of entitlement. America is expected to guard wealthy allies in both Europe and Asia, remake nations in Afghanistan and Iraq, combat terrorists in Pakistan and Yemen, intervene in civil wars in the Balkans and Syria, respond to crises in Iraq and Ukraine, and much more. But that’s not enough. Minister Sikorski and his colleagues insist on concrete support to provide “reassurance.” They expect Washington to not only defend them, but work really, really hard to convince them that Washington will defend them.

At the same time, Poland can’t be bothered to sacrifice to build up its own military. Ambassador Schnepf proudly announced that “during President Obama’s trip to Warsaw, Polish authorities pledged to spend 2 percent of GDP on defense expenditures, thus being one of very few Alliance members to reach this NATO benchmark.” That’s not much of a standard, however, given the Europeans’ willingness to take a cheap, if not completely free, ride on America. Moreover, the United States, facing no serious existential threat, makes twice as much effort in order to defend everyone else.

Indeed, despite enjoying rapid economic growth, Warsaw has made no extra effort to improve its defenses as a “frontline state.” After reducing outlays and demobilizing troops following the Soviet collapse, Polish military outlays ran around 2 percent of GDP in the mid-1990s. After nearly two decades, Poland remains where it was—despite now screaming about the renewed threat from the east. The ambassador spoke of Warsaw’s “multibillion-dollar modernization of its armed forces.” Let’s hope it occurs. However, economic considerations—and America’s defense promises—have short-circuited similar programs in other European countries.

Of course, it should be up to Poland to decide how large of a military it needs. But if the Poles really are worried about the prospect of Russian aggression or coercion, they should be doing much more. Instead, they want America to do the job for them, by establishing a military tripwire at their border.

Which leaves the ambassador to argue, who cares about strategic importance? Washington should guarantee Poland’s security because the Poles are nice people and it would be, well, kind of ignoble for Americans to risk their future only when their community had something fundamental at stake. There’s a certain appeal to that argument, but it’s always easier to be generous with other people’s lives and money on your own people’s behalf.

Moreover, the contention proves far too much. The same case can be made for Brazil, Chad, Myanmar, India, Georgia, Kyrgyzstan, Bolivia, Belize, Fiji, Ukraine, and just about everyone else. There are lots of nice people in the world. But that’s no reason to turn 18-year-old Americans into personal bodyguards for other peoples, bankrupting Washington in the process.

Most alliances are costly and risky, like NATO. Handing out security guarantees is not the same as giving away Valentines in class, where everyone gets a card. America should maintain alliances only when doing so makes Americans safer. Backing Poland against Russia does not. Instead, doing so multiplies risks facing the United States without providing any countervailing advantages.

There is much to appreciate about Polish-American ties over the years, even centuries. So, too, should Americans sympathize with the fact that Poland is located in a bad neighborhood. However, neither point is an argument for defending Poland. The promise to go to war is the most serious promise a state can make. That commitment should be limited to cases where the American people have fundamental, vital interests at stake.

Doug Bandow is a Senior Fellow at the Cato Institute and a former Special Assistant to President Ronald Reagan. Follow him on Twitter: @Doug_Bandow.