America’s Top Competitor Is Not Russia Or China, But Itself 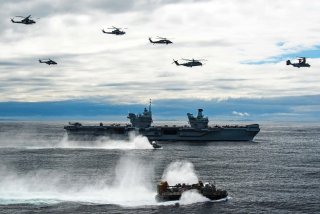 OVER THE past four years, the construct of “great-power competition” has become a pillar of discussions over the future of U.S. foreign policy, largely transcending ideological divisions in Congress and bringing together observers who might disagree strongly over a wide range of questions—how, for example, to strengthen transatlantic ties, handle Iran’s nuclear advances, and generate more sustained action against climate change. While discussion of great-power competition grew during the second half of the Obama administration—particularly with Russia’s annexation of Crimea and a multifaceted deterioration of U.S.-China relations—the construct did not begin to diffuse widely in policymaking and scholarly circles until the arrival of the Trump administration. The 2017 National Security Strategy (NSS) concluded that “after being dismissed as a phenomenon of an earlier century, great-power competition returned.” The 2018 National Defense Strategy (NDS) affirmed that judgment, observing that “[t]he central challenge to U.S. prosperity and security is the reemergence of long-term, strategic competition by … revisionist powers.”

The United States is relatively less influential than it was in the immediate aftermath of the Soviet Union’s dissolution, and China and Russia are increasingly contesting a post-Cold War settlement that they regard to be overly U.S.-centric. A U.S. foreign policy that revolves around competing with those two countries, however, runs at least three risks. First, reflecting a fear that relative U.S. decline will gain momentum if the United States does not contest them ubiquitously, it could place Washington in a reactive posture. The United States might unnerve allies and partners if they conclude that it regards them principally as instruments in a campaign to challenge its chief competitors—as opposed to teammates in the enterprise of constructing a more durable order. Second, proceeding from a framework of great-power competition could induce overreactions to two serious yet manageable competitors, strengthening a Sino-Russian entente whose momentum Washington has long sought to slow. Third, to the extent that such an orientation casts cooperative pursuits as secondary considerations, even strategic concessions, it could undercut America’s ability to manage the transnational challenges, including climate change and pandemic disease, that increasingly undermine Americans’ welfare.

If, in its post-Cold War triumphalism, the United States discounted the capacity of authoritarian countries to contest its conception of modernity, it now risks overstating their competitive potential—and, in so doing, pursuing a foreign policy that is predicated more upon reacting to their decisions than upon renewing its competitive strengths. To develop the confidence to compete with Beijing and Moscow selectively, taking care that their actions do not come to govern its foreign policy, Washington must find a middle ground between the twin perils of complacency and consternation.

TURNING TO China, given the familiar inventory of its competitive assets and the widespread presumption that it seeks global preeminence, it is useful to consider some of its liabilities as well—not to understate Beijing’s challenge, but to suggest that its resurgence is not so overwhelming a force as to justify a China-centric U.S. foreign policy.

Demographic decline, environmental degradation, and inefficient growth all pose significant hurdles to Beijing’s long-term trajectory. So, too, do the steadily growing concentration of power in the hands of its leader, Xi Jinping, and the attendant impact on the Chinese Communist Party’s capacity to engage in prudent decisionmaking. And the growing vigor with which China inveighs against the configuration of the present order betrays not only the inchoateness of its own conception, but also the extent to which, by its own admission, it has been a principal beneficiary; in early 2016, when she was the chair of the foreign affairs committee of China’s National People’s Congress, Fu Ying conceded that the U.S.-led order “has made great contributions to human progress and economic growth.”

But perhaps the greatest obstacle Beijing faces is growing distrust among the advanced industrial democracies that, while not as collectively predominant as they were at the turn of the century, still wield the preponderance of aggregated power. China’s strategic predicament is not, in fairness, wholly of its own making. The speed and scale of its transformation over the past four decades—and especially over the past two, since its accession to the World Trade Organization—would likely have proven disconcerting even if Beijing had made every effort to sustain a “hide and bide” disposition, engaging externally only as necessary to sustain a baseline level of growth. Up until recently, after all, it had strained credulity to regard such a trajectory as plausible. Just over two decades ago, adducing a wealth of evidence, the then-director of studies at the International Institute for Strategic Studies called China “a theoretical power” whose prominence in Western imaginations belied what he assessed to be its marginality in world order: “China matters about as much as Brazil for the global economy. It is a medium-rank military power, and it exerts no political pull at all.”

Granting, then, that it would almost surely have elicited some suspicion, China has nonetheless comported itself in a sufficiently heavy-handed manner over the past two years that, while its share of global exports and its centrality to global supply chains are greater than they were before the onset of the coronavirus pandemic, its strategic outlook is more challenged. Stung by international criticism over measures that it took to manage the initial phase of its outbreak—including the silencing of whistleblower doctors such as Li Wenliang—and widespread reports of defects in its shipments of personal protective equipment, it initiated a course of counterproductive foreign policy that endures to the present. It enacted “national security” legislation that undermined Hong Kong’s semiautonomous status, intensified its multifaceted pressure campaign against Taiwan, engaged in clashes across the Line of Actual Control that left twenty Indian soldiers dead, consolidated widely disputed maritime claims in the South China Sea and East China Sea, imposed economic penalties against countries that called for an independent inquiry into the origins of the coronavirus, and countersanctioned prominent European parliamentarians and even think tanks after a Western coalition sanctioned Chinese figures involved in perpetrating human rights abuses against Uighurs.

The consequences of China’s conduct are increasingly apparent: while its partnership with Russia is deepening apace, its relationships with most major powers are either unstable or deteriorating. Long perceived to be muddling along as little more than an abstraction, the Quad—comprising the United States, Australia, India, and Japan—now has clear momentum. The four member countries will not, of course, proceed in lockstep. And it is unclear that shared anxieties over China’s resurgence can impel the grouping indefinitely on their own; the Quad will need to continue undertaking efforts, such as provisioning COVID-19 vaccines to Southeast Asia, that can be justified without invoking Beijing. But China has stimulated what is likely to prove enduring resistance in its own neighborhood.

Further afield, it has imperiled the Comprehensive Agreement on Investment with the European Union (EU), over seven years in the making, that was supposed to demonstrate to the incoming Biden administration that China would be able to drive wedges between Washington and Brussels as readily as it did during the Trump administration. While the pact may yet cross the finish line, the European Parliament has halted the ratification process. In addition, the United Kingdom, France, and Germany have all taken steps to reduce the role of Huawei in building out their 5G networks. While the EU is unlikely to go as far as the United States in contesting China, it is rethinking the contours of its relationship with Beijing in a manner that would have been difficult to imagine even five years earlier. And, as seen with the September 2021 announcement of the AUKUS security partnership between Washington, London, and Canberra, China will increasingly have to contend with coalitions that bring together Asian and European countries.

A little over a decade ago, the influential international relations scholar Yan Xuetong argued that “the core of competition between China and the United States will be to see who has more high-quality friends.” That China’s self-constraining diplomacy is compelling many major powers to align themselves more closely with the United States creates breathing room for Washington: U.S. foreign policy need not be beholden to the actions of a competitor that is increasingly obstructing its own path.

AS FOR Russia, even if one believes that it is declining or stagnating, it has a range of competitive assets that cement its endurance as a major power: beyond possessing the world’s largest landmass, proven reserves of natural gas, and nuclear stockpile, it ranks fourth in defense expenditures, ninth in population, and eleventh in gross domestic product (GDP). In addition, its status as a permanent member of the United Nations Security Council gives it considerable diplomatic leverage.

Moscow has also demonstrated a capacity to challenge Washington in numerous ways: it continues to destabilize and mobilize against Ukraine, supports disintegrationist elements within the EU that seek to dilute transatlantic ties, bolsters a brutal regime in war-torn Syria, conducts hacking operations against U.S. government agencies and corporations, and interferes in U.S. elections with an eye to stoking extant ideological fissures.

And yet, Russia does not have the kind of economic heft that enables China to make global inroads through initiatives such as the Belt and Road or companies such as Huawei. Nor do its scattered disruptions cohere into the kind of sustained challenge that Beijing can mount. Indeed, were China not a significant economic and technological challenger, it is unclear that Moscow’s conduct alone would have yielded the present U.S. focus on great-power competition; it is telling that observers increasingly analyze the competitive challenge that it presents as an adjunct to that which emanates from Beijing.