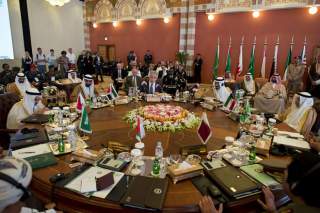 In October, Vice President Joe Biden publicly accused U.S. allies in the Middle East of supporting terrorist groups in Syria and Iraq. “Our allies in the region were our largest problem in Syria,” the vice president declared.. “They were so determined to take down Assad...they poured hundreds of millions of dollars and tens [of] thousands of tons of weapons into…al-Nusrah and al-Qaeda and the extremist elements of jihadis coming from other parts of the world.”

Only weeks earlier, President Obama had announced a bombing campaign to “degrade and ultimately destroy” the Islamic State in Iraq and Syria (ISIS). Even after the development of ISIS, which became so brutal al-Qaeda disavowed it, Biden said, “we could not convince our colleagues to stop supplying them.”

Biden was quickly rebuffed and forced to retract his public indictment of the U.S. allies he implicated, primarily Saudi Arabia, Qatar, Kuwait, and the United Arab Emirates. Washington provides these regimes with substantial economic and military support even as they pursue policies that run counter to U.S. interests.

It's become clear the costs for the U.S. of maintaining these alliances outweigh the perceived benefits.

U.S. allies in the Persian Gulf have a history of directly supporting or at least allowing private funds to flow to terrorist groups. This phenomenon has its roots in the U.S. and Saudi-backed Afghan insurgency against the Soviet Union, which included aid to the so-called “Arab Afghans” who joined the indigenous insurgency. The impact on Saudi society, and the broader Middle East, was profound.

Following the 9/11 attacks, in which 15 of the 19 hijackers were Saudi, many in the U.S. raised the issue of terrorist financing from wealthy private donors, and perhaps even the government itself, in Saudi Arabia. The 9/11 Commission Report acknowledged that charities based in Saudi Arabia provided funds to Al-Qaeda but “found no evidence that the Saudi government” was directly involved. However, the Bush administration excised 28 pages of findings on the subject of possible Saudi involvement in the 9/11 attacks, citing national security concerns. Current and former members of Congress say those 28 pages contain direct evidence of complicity on the part of certain Saudi officials and entities.

At the same time, Gulf monarchies view these terrorist groups as a serious threat. But the Saudi state is inhibited in dealing with terrorist financing, as it cannot afford to estrange the powerful clerical establishment that permeates society and is comparatively unabashed about funding jihadists.

Qatar is another notable culprit. “Qatar is believed to have directly supported some of the most radical groups fighting in the Syrian war through much of 2013,” writes Lori Plotkin Boghardt, a fellow at the Washington Institute for Near East Policy. Despite U.S. objections, Qatar “still tolerates private fundraising for Al Qaeda, ISIS, and other radical organizations.”

Fundraisers in Kuwait, the UAE, and Oman “are soliciting donations to fund extremist insurgents, not to meet legitimate humanitarian needs,” David Cohen, Treasury undersecretary for terrorism and financial intelligence, recently told NBC News. "The recipients of these funds are often terrorist groups, including al Qaeda’s Syrian affiliate, al-Nusrah Front, and the Islamic State of Iraq and the Levant [ISIS]."

Attempts to pressure the Arab Gulf states to cut off the flow of support to terrorist groups have proven largely ineffective. A 2002 Council on Foreign Relations report noted that Saudi Arabia responded to pressure from the Bush administration to “tighten controls over the flow of funds in or through the kingdom.” Still, the same report criticized Saudi Arabia’s “failure to punish, in a demonstrable manner, specific and identified leaders of charities found to be funneling money to militant Islamist organizations.”

In addition to problems of enforcement, Saudi Arabia appears to revive financing for militant groups when faced with overwhelming national interests. As Biden indicated, the opportunity to take advantage of the Syrian civil war took precedence over concerns about terrorist financing. Qatar has also half-heartedly yielded to U.S. pressure. Foreign Policy recently reported that Qatar responded to Treasury Department accusations of terrorist financing when it “instituted a new law to regulate charities and prevent them from engaging in politics.” Unfortunately, as Foreign Policy went on to note, Doha continues to play “a major role in destabilizing every trouble spot in the region and in accelerating the growth in radical and jihadi factions.”

Over the course of several decades, these regimes have shown that they consider it a vital national interest to placate their domestic fundamentalist religious constituencies and to fight for Sunni Arab dominance in the Middle East by proxy, even at the risk of jeopardizing their relationship with the United States.

Fighting terrorism is a top priority in Washington and it continues to be the foremost reason cited in nearly every military intervention. So, what explains Washington’s tolerance of Middle East allies that support extremist groups?

Longstanding precepts dating back to the end of World War II continue to influence U.S. foreign policy towards the Middle East. On its perch as the most dominant military and economic state in the post-war international system, the U.S. initiated strategies that demanded a global military presence. As a top secret National Security Council briefing put it in 1954, “the Near East is of great strategic, political, and economic importance,” as it “contains the greatest petroleum resources in the world” as well as “essential locations for strategic military bases in any world conflict.” U.S. control of the energy rich region was necessary to prevent the rise of any regional hegemon that could dominate the oil resources and disrupt either the flow or the price of oil exports.

Currying favor with Persian Gulf regimes is also considered essential to maintaining U.S. power projection in the region. The Navy’s Fifth Fleet in Bahrain enables the U.S. to patrol the Strait of Hormuz, through which 35 percent of the world’s seaborne traded oil passes, and signal to potential belligerents, like Iran, that any attempt to block the strait would be met with force. Similarly, the U.S. Air Force’s biggest base in the region, based in Qatar, “coordinated all of the U.S. attack and surveillance missions for the wars in Iraq and Afghanistan,” and is now coordinating U.S. airstrikes against ISIS. Washington’s reliance on these military bases creates a certain level of tolerance for objectionable aspects of the host governments’ rule, like tacit support for Islamic jihadists. Policymakers are also disinclined to protest unwelcome Gulf state policies because close relationships can help influence their behavior on crucial matters, like intelligence cooperation.

The Gulf states receive tangible benefits from their alliance with the U.S. in the form of advanced military equipment, extensive training programs, protection of their vital natural resources, and the tacit guarantee that Washington will come to their defense if they are threatened or attacked.

The benefits the U.S. enjoys in return are trivial by comparison.

The U.S. should not maintain alliances that are harmful to U.S. interests and should not tolerate terrorist financing by states that receive substantial U.S. support.  Military obligations and alliance commitments should therefore be withdrawn. The U.S. does have interests in the security and supply of oil, but those interests are often exaggerated and the region’s energy resources are not as vulnerable as is often claimed.

Few states have the military capability to close the Strait of Hormuz and keep it closed, especially in the face of the overwhelming international military response that would inevitably rise to counter it. Many world powers have a vital national interest in keeping the Strait of Hormuz open and none of the relatively weak states in the Middle East would have an interest in attracting that kind of vehement global response. What threat there is to the Strait of Hormuz may actually be exacerbated by America’s forward deployed military posture. As a Cato Institute report noted, the U.S. military presence in the region “can create new incentives for other actors to threaten, disrupt, or close strategic chokepoints as a way of deterring or retaliating against American activities.” Thus, as Eugene Gholz and Daryl G. Press concluded, “the day-to-day peacetime presence of U.S. military forces in the Persian Gulf region is not merely ineffective; it is probably counterproductive for protecting U.S. oil interests.”

Furthermore, Persian Gulf oil only has a modest impact on the U.S. economy, accounting for about 20 percent of oil imports. And even this modest percentage is declining. Total crude oil imports have declined by 23 percent since 2008, and, according to the U.S. Energy Information Administration, “net import volumes of crude oil and liquid fuels on a volume basis are projected to decline by 55 percent between 2012 and 2020.”

The U.S. is also relatively insulated from sudden disruptions in supply. In every major oil shock since 1973, global energy markets adapted rather quickly through increasing production from other sources, rerouting shipping transportation, and putting both private and government-held inventories around the world to use.

Washington’s client states in the Persian Gulf engage in behavior that contradicts U.S. interests. Outdated and misguided ideas about the importance of our Persian Gulf allies, driven by an imprudent and expansive grand strategy, continue to incentivize policymakers to overlook the substantial costs associated with them.