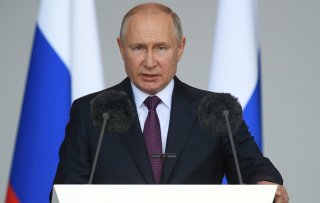 Ukraine’s continued existence as an independent state is a well-established part of the national security agenda of the United States. The reasons for this have nothing to do with Ukraine per se, but rather, as Secretary of State Hillary Clinton candidly explained back in 2012, it is to prevent the reconstitution of the former Soviet Union. Since the annexation of Crimea in 2014, this objective has been further refined into transforming Ukraine into a permanent bulwark against Russian expansion.

Because the overriding concern of U.S. policy in Ukraine is to prevent the re-emergence of America’s erstwhile Cold War rival, many unsavory aspects of current Ukrainian society, such as the rise of ethnic nationalism, tend to be overlooked by the U.S. government and media. Prior to 2014, Western analysts typically assumed that the rise of nationalism was a short-lived reaction to decades of Soviet suppression of ethnic identity. As Ukraine moved closer to Europe, therefore, it would adopt more liberal and inclusive policies toward its minorities.

This has proved not to be the case. Indeed, the intensity of popular resistance to the government’s efforts to impose a monocultural Ukrainian identity on the country’s bicultural east and south, has led many Western analysts to careen between euphoric optimism, when the ostensibly pro-Western forces in Ukraine seemed to be in the ascendance, to deep pessimism and “Ukraine fatigue,” when the ostensibly pro-Russian forces seemed to be gaining the upper hand.

Since the 2014 Maidan, the heroes and ideology of integral Ukrainian nationalism have become much more politically relevant; a useful complement to the Ukrainian government narrative of the conflict in the east as Russian aggression.

Sensing an opportunity to break Ukraine away from Russian influence once and for all, American elites have been largely indifferent, and sometimes even openly hostile, to the cultural pluralism and regional diversity of Ukrainian society. This has resulted in the United States taking positions that few Americans would understand or support, if they were more widely known.

Earlier this year, for example, Ukrainian president Volodymyr Zelenskyy imposed the most draconian restrictions on opposition media Europe has seen since the fall of the Soviet Union. With the stroke of a pen, he shut down three popular opposition news channels, employing more than a thousand journalists and support staff. Tellingly, the United States supported this egregious act of political censorship as a “defense of its sovereignty and territorial integrity.”

Although numerous Ukrainian legal scholars have pointed out that the president does not have the authority to shut down any media outlet without a court order, Zelenskyy has gotten around this by retroactively annulling the appointment of the head of the Constitutional Court, and ignoring the Supreme Court’s decision to reinstate him. The entire judicial system is now paralyzed and can no longer serve as an effective check on executive rule.

Emboldened by this success, a few months later, Zelenskyy shut down the country’s most popular opposition news site Strana.ua, whose reporters have broken some of the country’s most notorious scandals. These include: “Vagnergate,” the plot by Ukrainian security forces to convince Belarus president Alexander Lukashenko that Russia was organizing a coup against him, subsequently leaked to Russia; the Rotterdam plus scandal, in which coal from eastern Ukraine was bought at the cost of transporting it from Holland, which defrauded Ukrainian consumers of more than $1.5 billion over three years; the diversion of Covid-19 relief funding; and the apparent diversion of a Ukrainian government plane intended for Ukrainians fleeing from Afghanistan for the personal use of wealthy Afghans.

Yet another undesirable consequence of American policy in the region has been the veritable explosion of corruption, even beyond the already high levels of Zelenskyy’s predecessor. According to the nonpartisan Committee of Ukrainian Voters, every fifth member of parliament from Zelenskyy’s party, Servant of the People, has been involved in one public scandal or another. According to Zelenskyy’s former finance minister, Igor Umansky, the sheer scale of corruption today has led to “the loss of an adequate perception of reality by the authorities.” Even the new Ukrainian government agencies that, at the West’s insistence, were established to fight corruption, are now widely seen as profiting from it.

These examples, to which many more could be added, highlight the core problem at the heart of America’s strategy toward Ukraine—it is not about Ukraine at all, and never has been; It has always been about containing Russia.

The paradoxical result is that, in order to strengthen Ukraine’s independence, Western governments argue that they must embed scores of their own advisors in key Ukrainian government agencies, even demanding that Western representatives be allowed to vote on key judicial and governmental appointments. After Zelenskyy’s deputy chief of staff, Oleg Tatarov, complained publicly this amounted to external administration, he abruptly found himself suspended from office and under indictment. Nearly two-thirds of Ukrainians surveyed in early 2021, however, agreed with his description.

What is Needed: A New Treaty of Westphalia

Current U.S. policy in Ukraine is following a familiar script, one that leads to a resurgence of nostalgia for the past, and typically ends with the rejection of the West’s overbearing tutelage. Proponents of the present course argue that without such tutelage there would be “backsliding” on reforms, and the possibility of Ukraine getting closer to Russia, the dreaded non plus ultra for American security interests. In fact, however, it is America’s own calculated indifference for the rights of Russophone Ukrainians that, more than anything, increases the likelihood of a future political and geostrategic blowback.

America’s real interests lie in creating the conditions for a self-sustaining, peaceful, and prosperous Ukraine; one that can make its own security decisions. Instead, current U.S. policy fosters an unhealthy dependency, which has already stymied peace efforts, by encouraging Ukrainian officials to reject dialogue with rebel leaders in Donbass, and caused enormous economic losses by cutting normal economic ties with Russia, formerly the country’s largest trading partner.

Instead of doing further damage to Ukraine, policymakers should take to heart the pluricultural nature of Ukrainian society, and also reflect on America’s poor track record in trying to manage the internal affairs of other countries. A good place to begin would be to restore some semblance of balance to America’s human rights policy toward Ukraine, by having it apply to all Ukrainians, including those in the east and south.

U.S. policymakers should also share with the American public what costs they are willing to have us incur in order to achieve an anti-Russian Ukraine and, most importantly, to sustain it in the face of Russia’s cultural and dominance. How exactly is a Russophobic Ukraine to be achieved when, as former Ukrainian president Viktor Yushchenko recently lamented, 40 percent of Ukrainians actually agree with Russian president Vladimir Putin that Ukrainians and Russians are one people, and more young people agree with this view than people over sixty! If no sensible explanation can be provided, then I submit that the current policy cannot be in the national interest of the United States.

We should instead be thinking more creatively about how to solve the region’s problems, and salvage what is left of the “Peace Dividend” promised by the end of the Cold War. A transnational and international conflict of this complexity calls for a new Treaty of Westphalia, the gist of it would be this: Russia and the United States and NATO should de-escalate; Russia and Ukraine should de-escalate; all parties should then agree to begin comprehensive negotiations aimed at achieving a post-Cold War settlement in which both Ukraine and Russia join a new pan-European security arrangement. Such a framework might just provide enough of an incentive for Russia and Ukraine to deal creatively to resolve their differences in Donbass and Crimea. Failing this, however, they should both forego the benefits of European integration, foreign investment, and security guarantees.

Last month, I had occasion to mention this idea to Deputy Foreign Minister Sergei Ryabkov. He responded coolly, pointing out that, in the current climate, even minor agreements with the West were almost impossible to achieve. Putin’s latest proposal for meaningful security guarantees, however, suggests to me that the door to a comprehensive settlement is not yet entirely closed.

It is now up to the West to respond with greater wisdom than it did in 2008, when Russian president Dmitry Medvedev’s proposal to begin discussions on a new pan-European security arrangement were foolishly dismissed. That resulted in a decade of ever-deepening crisis. It is time to give diplomats an opportunity to take up the true challenge of this generation—to construct a post-Cold War settlement, the benefits of which would be, literally, incalculable: Europe and Eurasia’s economy would thrive from having secure and stable energy supplies, as well as new and nearby markets in which to expand.

Absent a bold, new vision on our present trajectory we will surely resurrect the Cold War, if we are lucky; or fight it, if we are not.

Nicolai N. Petro is a Professor of Political Science at the University of Rhode Island (USA), specializing in Ukraine and Russia. His latest book, "Ukraine in Crisis," was published by Routledge in 2017.