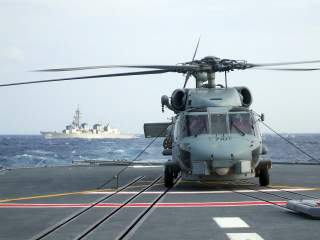 During the U.S. presidential election, American foreign-policy experts reassured their international counterparts that the Trump phenomenon was only a fad and that cooler heads would prevail. The foreign-policy establishment in the United States was not prepared for a Donald Trump presidency, and the international community was even more caught off guard. Trump’s surprising victory will have a significant impact domestically and internationally, because his lack of political experience will make it difficult for world leaders to ascertain U.S. policy going forward. Moreover, his penchant for outlining complex policy objectives and attacking rival superpowers on Twitter, his habit of backtracking on previous statements and his “America First” rhetoric will bring immense uncertainty and unease within the international community.

No world leader may be more impacted by an unpredictable United States than Shinzo Abe, the Japanese prime minister, who has tied much of his foreign policy to a steadfast U.S.-Japan alliance. Indeed, Abe reaffirmed this during a speech at Japan’s National Diet earlier this month: “In the past, now, and from now on, it is the Japan-U.S. alliance that is the cornerstone of foreign and security policies of our country. This is a changeless principle.” Abe’s dependence on the United States is combined with other factors. His efforts to reform Japan’s antiquated security and defense posture and his desire to nurture other relationships in the region—including those with India and Australia—contribute to that dependence.

During Abe’s second term, he has sought to “normalize” Japan by increasing the capabilities and role of the Japan Self-Defense Forces, improving Japan’s stature in international relations, and reducing the constitutional barriers that previously limited Japan’s ability to respond to a rapidly changing international-security environment and a rising China. However, this increased autonomy was, ironically, heavily dependent on a strong alliance with the United States.

Abe’s ability to pursue his foreign-policy and security objectives is contingent on his domestic successes, namely reviving a stagnant economy. However, both these objectives have been muddied by Trump’s scattergun approach towards Japan and East Asia writ large. Trump’s potential distancing from the region may force Abe to pursue his goals independent of United States support, which could lead to increased risk taking and raise concerns in China and South Korea.

Birds of a Feather?

Some commentators have said that Abe’s “hard-headed, conservative style may appeal to Trump.” Abe, sensing opportunity following the election, quickly secured a November 17 meeting with Trump. He was the first world leader to do so. Abe had two broad objectives: first, to “underscore the importance of the Japan-U.S. alliance” and, second, to salvage the Trans-Pacific Partnership. Abe left the meeting confident and described Trump as a “trustworthy leader” while securing a future meeting to discuss the issues in greater depth. Following the meeting, Japan ratified the TPP, a sign that Abe initially held onto the hope that Trump would change his mind on the trade pact. These hopes now appear dashed, as one of Trump’s first executive actions since assuming the White House was to sign an order withdrawing the United States from the trade pact. Still, Abe seems insistent on pushing forward an amicable line with Trump and remains focused on meeting with the president in the coming weeks.

Abe and Trump also share a willingness to engage with Russia. Although not as enamored with President Vladimir Putin as Trump, Abe showed a realist pragmatism when he met with Putin in mid-December to discuss security issues and territorial disputes. Although Abe did not make significant gains concerning the islands, he laid the groundwork for future meetings to discuss joint economic projects in the region.

Abe is also likely to find support from Trump concerning the security threats from China and North Korea security. The rise of China and North Korea’s nuclear capabilities are the driving security factors that have led to changes in Japanese security policy. In early December, Trump took the unprecedented action of accepting a call from Taiwan’s President Tsai Ing-wen. China took notice and has since taken increasingly provocative actions to signal its displeasure to Trump. Trump responded by doubling down and posting several tweets criticizing China. He has also questioned its activities in the South China Sea, and set the stage for an epic confrontation with China on trade-related issues through his appointment of Peter Navarro—renowned for his tough talk on Beijing—as his chief trade envoy.

He has shown the same assertiveness with North Korea. He tweeted that the country’s nuclear weapons won’t reach the United States. Moreover, Trump has been very critical of China for not doing more to address the North Korea problem. Such bold actions should be welcome news for Abe, who has hoped for stronger positions from the United States and privately chafed at the somewhat nonadversarial posture President Barack Obama took vis-à-vis Beijing.

Lastly, Abe is likely not to face pressure from Trump on historical issues as he did with President Obama and former Secretary of State Hillary Clinton. For example, during a press conference with South Korean president Park Guen-hye, Obama once stated that the use of comfort women “was a terrible, egregious violation of human rights,” which drew ire from Japan. Obama was also critical of Abe’s visits to the Yasukuni Shrine as he believed the visits were obstacles to the U.S. pivot to Asia. Abe saw the history issues and security objectives as separate and did not wish to mix them. Trump has shown no signs of addressing history and human rights in the region and is likely to focus mainly on economic issues.

Since the end of World War II, Japanese leaders have had to maintain a delicate balance of avoiding U.S. entrapment and abandonment. If those leaders followed the United States too closely, then Japan could have be drawn into costly conflicts. If the country sought too much autonomy, then it would face intense criticism and jeopardize the alliance. Although Trump and Abe may share similar assessments of threats, they differ in on how to engage with these problems.

During the election, Trump regularly criticized U.S. allies. “We defend countries,” he said. “They do not pay us. But they should be paying us, because we are providing a tremendous service.” This sentiment shocked Japanese leaders, which resulting in several of them speaking out against the president-elect’s mischaracterizations of the alliance. Trump’s assessment is troubling for Abe, because it shows he undervalues Japan’s significant contributions to hosting U.S. forces and shows a general lack of appreciation for the importance of the alliance in East Asian security. If Abe is unable to convince Trump of the importance of a U.S. commitment to the region, then he will need to make significant concessions, such as increasing base support or decreasing the U.S. footprint in Japan—both of which would increase the costs for Abe without gaining additional security capabilities.

Trump has also suggested that Japan should acquire its own nuclear arsenal to protect itself. The shocking statement went against decades of nonproliferation policies held by the United States and Japan. Foreign Minister Fumio Kishida responded to it by saying, “I don’t believe Japan will possess nuclear arms. This principle won’t change.” Trump’s flippant stance on proliferation also undermines two of Abe’s biggest foreign policy victories in 2016: President Obama’s visit to Hiroshima in May and Abe’s visit to Pearl Harbor in December.

Most problematic for Abe is Trump’s strong anti-TPP stance. Prime Minister Abe has exhausted much of his political capital on TPP, hoping that it would drive structural reform of the Japanese economy, the so-called third arrow of Abenomics. Meanwhile, Trump has promised to drop out of TPP and has shown no signs of changing his mind. While Trump may float a bilateral trade deal with Tokyo as a compromise, this would lack the strategic regional approach that Abe desires with the TPP.

Alliances require transparency, dependability and mutual respect. Prior to the Trump-Abe meeting, a senior Abe advisor suggested that he not take Trump’s remarks concerning the alliance literally. Still, even a figurative interpretation of Trump’s anti-alliance remarks does not instill confidence in the alliance. Indeed, the Trump administration should look at alliances as mutually beneficial and not see them with a mercenary lens. It will be difficult for Abe to pursue costly and controversial normalization policies without a guarantee that the United States will be there to support him every step of the way. Additionally, without strong support from Washington, DC for TPP and a strong U.S.-Japan alliance, Tokyo does not have the resources to pursue major foreign-policy changes alone.

A wavering or uncertain United States commitment has several implications for the region. The United States has historically been the “cork in the bottle” in East Asia. Without the United States, Japanese security policies may be interpreted as aggressive by Japan’s neighbors. Already, conservatives in Japan see the United States’ withdrawal from the region as an opportunity to strengthen the nation’s military posture.

The volatility in the region underpins the need for Japan to mobilize the diplomatic capital it has amassed under Abe’s tenure in order to push forward the rules-based liberal order. Abe should look to drive forward the expansive—but still relatively nascent—security network in the region made up of several U.S. allies and partners. Specifically, Abe should take it upon himself to stress the importance of these trilaterals (such as U.S.-Japan-Australia, U.S.-Japan-India, U.S.-Japan-ROK, etc.) to Trump. Abe will rely on these relationships and nurturing diplomatic and political investments with like-minded states in the region as a soft or complementary hedge to potential U.S. drift on Asia under Trump.

While it is clear that Trump will not pursue U.S. involvement in the TPP, there is much uncertainty on the rest of his foreign-policy leanings in East Asia. Moreover, while Trump may have a preference towards bilateral alliances and a transactional approach to security relationships, it remains premature and unrealistic to conclude that the United States will back Asia’s overlapping security networks. For these reasons, it will be important for Japan and the United States to work together as leaders on regional security. Essentially, the U.S.-Japan alliance should be used as a cornerstone—or starting point—for security networks in the region. Increasingly, this cooperation is intended to provide and protect more “public goods” in the region, such as free and open sea lanes, a fast and effective response to natural disasters, and common approaches to transnational crime, terrorism and counterproliferation.

Tom Le is an Assistant Professor of Politics at Pomona College. J. Berkshire Miller is an international affairs fellow with the Council on Foreign Relations and a senior fellow with the EastWest Institute.