Is America about to Get Tough in the South China Sea? 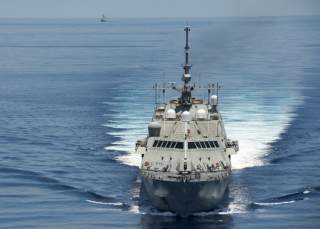 How the United States has treated maritime disputes in East Asia over the last 40 years owes much to a little-known cable that was drafted in the waning hours of December 31, 1970. On that night, Chinese patrol boats were shadowing an American oil exploration ship, the Gulftrex, in the disputed waters of the East China Sea. In Washington, a small group of officials from the U.S. Departments of State and Defense gathered to discuss how the United States should handle the situation if it escalated.

At the time, the United States was still militarily engaged in South Vietnam; and some officials feared that the Gulftrex could turn into another Pueblo incident (in which North Korea seized an American surveillance ship and imprisoned its crew). After a lengthy debate, the decision was made not to use U.S. forces to protect the ship, since it had already been warned that it would be sailing in disputed waters; and a cable was sent to U.S. Pacific Command. Underlying that decision was an assumption that the United States would remain neutral in the region’s maritime disputes. In fact, American policy was to “not only be one of scrupulous noninvolvement, but of active discouragement.”

For decades thereafter, the cable’s underlying assumption set the pattern for a hands-off U.S. policy towards such maritime disputes in the region, including the South China Sea. The United States would not take sides in the disputes, but would encourage the countries involved in them to resolve their conflicts peacefully.

On Tuesday, it seemed that Washington was about to change that policy. A Pentagon official revealed that Secretary of Defense Ashton Carter had requested options for asserting the freedom of navigation through the South China Sea. Those options included sending American ships and planes within 12 nautical miles (22 kilometers) of Chinese-held islands in the South China Sea. There was precedence for this. The United States similarly showed the flag in the Gulf of Sidra when Libya claimed those waters and in the Persian Gulf when Iran preyed on international shipping during the 1980s. A visible American military presence near the Spratly Islands would also help steady U.S. allies and partners in the region.

But why was such a major policy shift necessary at all? Part of the answer lies in China’s rise, of course. Given its political and economic heft, China feels that it can be more assertive in the South China Sea. But another part of the answer lies in how President Barack Obama’s administration has conducted its foreign policy. In almost every crisis it has faced—in Egypt, Syria, Libya, Crimea and eastern Ukraine—it has seemed unsure, both of itself and American interests. Its policies have been perceived as confused and prone to vacillation. That has caused many Asian leaders, including those in Beijing, to doubt American commitment and resolve. Indeed, Obama had to personally travel to Asia last fall to reassure U.S. allies, who have come to see the president as diffident about international security.

Given that perception, China sensed that it could afford to disregard the incremental signs of American displeasure to realize its objectives. Neither the modest increase in American military engagement with the region’s countries, nor the signing of the Enhanced Defense Cooperation Agreement between the United States and Philippines caused China to relent. Finally, in December 2014, the U.S. Department of State directly interjected itself into the South China Sea dispute for the first time. It published a report that questioned the basis of China’s maritime claims. But rather than heed the American admonition, China accelerated its land-reclamation activities across the region, creating about 2,000 acres of new land and its first airfield in the Spratly archipelago. Beijing clearly doubts the credibility of the Obama administration to stand in its way.

Despite much talk about its rebalance to Asia, the Obama administration has made few efforts that have convincingly demonstrated its commitment to the region—surely nothing that approaches China’s major military buildup or its $90 billion offer of economic development funds. So far, the United States has contented itself with repositioning its military assets across the Asia-Pacific, rather than meaningfully adding to them.

How American credibility is perceived could be heard in the remarkable tone of a speech given by the U.S. ambassador to the Philippines in March 2015. He had to stress that “We make no pretense that we are helping the Philippines,” as if to say: this time we really mean it. After all, the Obama administration has complained about Chinese actions in the South China Sea before, but has rarely taken a stand without an exit. It revitalized the U.S. mutual defense treaty with the Philippines, but then made clear that Philippine claims in the South China Sea lay outside the treaty’s protection. China may have seen that as another mixed signal.

The United States now finds itself in an unenviable position where it feels that it must respond to China’s actions in the South China Sea. No doubt Secretary of State John Kerry conveyed that message to Beijing on his trip to China this week. But at the moment the United States is still in the middle of its rebalance to Asia. It has only one littoral combat ship—the Fort Worth, based in Singapore—that can patrol near the Spratly Islands (which it did for the first time on Monday) or quickly respond to a crisis there.

Washington may have chosen to pursue a more forceful posture in the region. Hopefully, Beijing will take the United States more seriously. But in case China chooses to test American resolve, Washington had better be sure that the cavalry is ready over the horizon.

Felix K. Chang is a senior fellow at the Foreign Policy Research Institute and Chief Strategy Officer at DecisionQ, a predictive analytics company.