Is America About to Make a Fatal Mistake in the South China Sea? 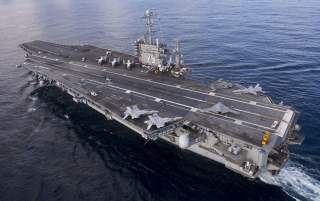 An already tense and dangerous situation in the South China Sea threatens to become even worse.  The latest development focuses on reports that the United States is considering plans to initiate systematic military patrols with ships and planes in that volatile area. Without even waiting for confirmation that the reports are accurate, Beijing expressed its great displeasure regarding such a step.

If this actually comes to pass, Washington is about to deepen its involvement in a bitter, multi-sided territorial dispute.  The underlying issues are murky and complex.  Based on dubious interpretations of both history and international law, China claims an oceanic boundary that would convert some 80 percent of the South China Sea—and the small islands dotting itf—from international waters into Chinese territorial waters.  Beijing has begun to enforce its claims with air and naval patrols and major reclamation projects to build serviceable artificial islands (in one case, even including an runway) from nearly submerged reefs. Several neighboring countries, including Vietnam, the Philippines, and Malaysia, not only challenge Beijing’s claim, they assert significant territorial ambitions of their own. Vietnam has even commenced a more limited artificial island construction of its own.

The Obama administration has made it clear that it does not accept China’s logic or evidence regarding the territorial issue.  Washington’s recalcitrance is unsurprising.  Crucial sea lanes pass through the South China Sea, carrying a substantial portion of the world’s commerce.  For U.S. leaders, that body of water is important both economically and strategically.  As the world’s leading naval power and economic leader, the United States is not about to countenance an effort to convert the South China Sea into a de facto Chinese lake.

An explicit assertion of American interest in the area came early in the Obama administration, highlighted by Secretary of State Hillary Clinton’s speech to a meeting of the Association of Southeast Asian Nations (ASEAN) in July 2010. Chinese officials regarded Clinton’s comments as gratuitous interference in a purely regional controversy. Subsequent U.S. actions deepened Beijing’s concerns and suspicions.

Washington’s rhetorical involvement in the South China Sea issue coincided with the announcement of the strategic “pivot” or “rebalancing” of U.S. military forces to establish a stronger presence in East Asia.  Moreover, the Obama administration has taken several specific steps that seem designed to thwart Beijing’s ambitions in the South China Sea.  Washington has moved to revitalize and deepen its long-standing mutual defense treaty with the Philippines.  U.S. officials, including then-Secretary of Defense Leon Panetta, also have reached out to other countries, especially Vietnam, to initiate bilateral military cooperation.  Although the Obama administration has repeatedly insisted that it remains neutral regarding the substance of the territorial disputes, Washington’s actions suggest otherwise.  Chinese leaders could be forgiven if they conclude that U.S. policy is essentially “anybody but China” with respect to the competing claims.

China’s paranoia also has likely deepened because of recent moves by Washington’s principal East Asian ally, Japan.  Not only has Tokyo taken steps to weaken the commitment to pacifism in the country’s constitution, it has become involved militarily outside its immediate neighborhood.  Earlier this month, Japan and the Philippines conducted joint naval maneuvers in the South China Sea. Tokyo also is moving to establish new maritime ties with Vietnam.

(Recommended: Why America Must Stand Up To China in the South China Sea)

Washington’s unsubtle backing of China’s rivals is encouraging them to take uncompromising stances that they may be incapable of enforcing without direct U.S. military involvement.  That is especially true of the Philippines.  Responding to prodding from its U.S. protector, Manila has announced ambitions to build a large naval base on its western coast near the disputed Spratly Islands to press its territorial claim there.   Such a move would further escalate tensions.

Instead of becoming more deeply entangled in the South China Sea quarrel, the United States needs to take a step back.  It is one thing to make clear to Beijing that Washington will never countenance China transforming 80 percent of that area into Chinese territorial waters.  It is quite another matter to implicitly back rival claimants and become a military participant in the underlying feuds.  Yet the United States has already done the former and seems poised to do the latter.  Such a course is likely to exacerbate an already dangerous security environment, and perhaps even more worrisome, create the prospect of a direct military confrontation between the United States and China.  Such an outcome would benefit no one.

Now is the time for flexible, creative diplomacy focused on protecting America’s core maritime interests, not the territorial ambitions of favored East Asian countries.  It might even be appropriate at this point to propose a compromise that would recognize a more modest Chinese claim while achieving an explicit agreement among all relevant parties that the rest of the South China Sea will forever remain international waters.  While there is no guarantee that such a diplomatic initiative would succeed (especially in the short term), it is a far better move than exacerbating an already dangerous situation with a provocative U.S. military presence.