America Alone: Why the Trump Administration Will Pay for Alienating Its Strategic Partners 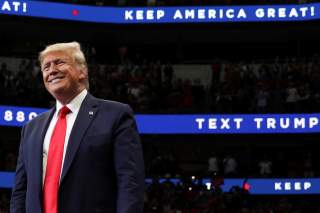 It is something of a conventional wisdom that the American Century is coming to an end if it has not already expired. Whether they attribute U.S. decline to the rise of great-power challengers or to the willful abdication of global leadership, most analysts seem to agree that the “unipolar moment” is giving way to a world system characterized by multiple centers of power. The United States will wield preponderant power for some time to come but it is no longer hegemonic.

Nobody knows if the next world order will be bipolar, with power divided between just two superpowers (most likely the United States and China); or multipolar, with three or more great powers vying for influence and authority. How this basic “structure” of world order takes shape will mostly depend upon developments within the various contenders for power. Whose economy will continue to grow and whose economy will stagnate? Whose political system will allow them to convert global ambitions into concrete actions, and who might instead be prone to domestic upheaval?

But the number of great powers in the international system does not determine everything about global politics. The character of international society matters just as much as its underlying structure. And when it comes to understanding the character of world order—that is, the panoply of rules, norms, behaviors, and institutions that provide each era of international politics with its distinct ethos—it is important to recognize the role played by middle powers.

Scholars of International Relations define middle powers as those states that lack the material wherewithal to challenge the truly great powers in military terms but which are nevertheless capable of waging independent and effective foreign policies. Middle powers can have a sizable impact upon international order, especially if they focus their efforts on a specific cause—e.g., human rights, peacekeeping, or arms control—and if they work in concert with other like-minded powers, big or small.

Because they lack the material power to comfortably provide for their own security, most middle powers have a keen interest in stabilizing their international environment—or, at most, in changing world politics through incremental and consensual processes. Their status and survival depend upon predictable surroundings.

Periods of shifting power can be especially fraught with danger for middle powers. They must choose between (1) propping up the existing world order; (2) bandwagoning with rising powers in hopes of influencing the shape of future international politics; or (3) serving as an intermediary between emerging and established powers with a view toward “smoothing” the transition from one world leader to the next. Above all else, middle powers must avoid being dragged into a devastating conflagration between great powers at loggerheads with one another.

During the Cold War, middle powers were instrumental in stabilizing relations between the United States and the Soviet Union. In part, this meant participating in the collective security agreements like NATO and the Warsaw Pact that served to keep the international distribution of power from falling out of balance. But at least in the West and parts of the nonaligned Third World, middle powers were also instrumental in pushing for the extension and deepening of multilateral cooperation in areas such as trade, investment, peacekeeping, and the peaceful resolution of disputes.

After the Cold War, most middle powers tethered themselves to the United States. They helped to make the unipolar moment “work” by giving it legitimacy, routinizing (and globalizing) the former First World’s multilateral institutions and rule-making processes, and demanding the creation of new institutions that outstripped even America’s ambitions for international cooperation, such as the UN Framework Convention on Climate Change and the International Criminal Court.

From the U.S. perspective, it would be ideal if middle powers continued to side with Washington in the face of challenges from China and Russia. If the world’s middle powers—especially democratic ones like Britain, France, Germany, Canada, Japan, South Korea, Australia, Brazil, South Africa, and others—could remain united in opposition to authoritarianism, then their collective efforts would go a long way towards buttressing America’s preferred configuration of international order.

Yet in a multipolar world, middle powers have options. Their support for the United States cannot be taken for granted. This is especially true given that, under President Donald Trump, American foreign policy has taken an unpredictable and abrasive turn. Trump has trashed international institutions, poured scorn on U.S. alliance commitments, referred to allies as tributaries, and renounced any ambition to global leadership. In such circumstances, even middle powers with long histories of cooperation with the United States can be forgiven for looking elsewhere.

What might happen? One possibility is that middle powers will choose to align with regional hegemons such as Russia in Eastern Europe, China in the Western Pacific, and Brazil in Latin America—resulting in what Michael Lind has called “Blocpolitik,” the division of the globe into distinct spheres of influence.

Alternatively, it might turn out that geographic proximity matters less than economic pull. If this happens, countries as far apart as Britain and Australia could find themselves drawn into the orbit of a rising economic behemoth like China, particularly if middle powers can convince themselves that they are serving an important role in facilitating the peaceful transition from U.S. hegemony to a Chinese-influenced world system.

There is another possibility, however, that warrants consideration—one that points to a bleak future for world politics. Namely, if middle powers conclude that they cannot work with any potential hegemon—neither a unilateralist and self-serving United States nor the authoritarian regimes of Russia and China—then they might be forced to retreat from their traditional role as stabilizers of world order and instead prioritize their own basic survival over any aspiration to shape the broader international environment.

Ominously, there is precedent for this sort of behavior. It is, in effect, the playbook of so-called “rogue states,” which are, after all, mostly just middle powers who have given up hope of shaping international politics to suit their needs and interests.

Rebuffed by the great powers and shut out of international decisionmaking, the leaders of rogue states must resort to unilateral actions to guarantee their survival. They prize independent means of military deterrence (including weapons of mass destruction) over collective security; they avoid international markets instead of pursuing economic interdependence and they find ways to bolster their domestic standing through demonizing outside forces rather than finding a place among the community of nations.

It is in America’s interest to avoid the world’s most important middle powers arriving at such pessimistic conclusions. Cultivating support among middle powers is perhaps the most straightforward way that the United States can ensure outsized influence for itself in the coming multipolar world. And, to be sure, there are good reasons to be optimistic about the future of international politics.

Even so, it remains true that the Trump administration has made almost no effort to secure broad international buy-in for a positive vision of international order. On the contrary, it has taken actions to alienate America’s strategic partners. Unless the next president does better with middle powers, the United States might live to regret what sort of world order it has allowed to emerge.