America and Europe Defeated Authoritarians Before, And Can Do So Again 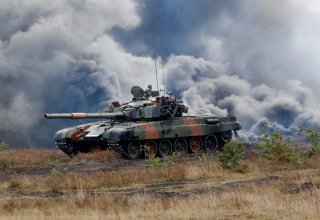 With one of the largest concentrations of Russian military forces since World War II massing along the borders of Ukraine, it’s important to step back and revisit fundamental strategic tenets of this new geopolitical era of history.

Great power competition is continuing to intensify, with China presenting a rapidly growing set of global challenges and Russia escalating its security threat to Europe and North America. Not since World War II has the United States faced the possibility of major war with two continental great powers. It’s worth letting this fact sink in, as there has been too much debate in the United States and European national security communities on important but relatively minor issues and not enough on how to deal with these large-scale challengers. It’s time for us to get serious and focus on the big issues.

The only way to navigate these challenges is to strengthen and adapt America’s alliances, particularly the vital alliance between Europe and North America. To compete with a rising Chinese superpower under Xi Jinping and a nationalist Russian regime willing to redraw the map of Europe, the U.S.-Europe partnership needs to be closer than ever before. But what should be the contours of a refreshed European-American alliance relationship to tackle the challenges and opportunities of this new era?

Over the past several years, transatlantic relations have hit rocky shoals, resulting in a weakening of the United States’ most consequential geopolitical partnership of the past seven decades. The United States has committed important strategic and tactical errors in alliance management over the last five years and two administrations. The Trump administration’s repeated public and high-volume criticism of close U.S. allies damaged our alliances deeply, putting geopolitical distance between governments and diminishing allied populations’ sense of shared values and trust in the reliability of the United States. More recently, the Biden administration committed two significant unforced errors in its lack of timely and effective consultations with allies regarding the withdrawal from Afghanistan and the new defense technology partnership with Australia and the United Kingdom. Together, these ruptures have created a growing sense of distrust in Europe about American reliability and commitment to mutual international priorities and interests. The United States must strive to rebuild this allied trust if it is to achieve its core national security goals.

Despite the difficulties of recent years, the United States and its European allies and partners are the most likeminded nations on the globe, finding deep and longstanding common cause in protecting shared values that lie at the heart of our societies, while also advancing mutual interests. The United States and Europe now find themselves mired in a new era of great-power rivalries, with China posing an even greater challenge than Russia due to its size and economic heft.

While the United States enjoyed a moment of unipolar dominance two decades ago, it no longer holds the same predominant relative power position; thus, it cannot effectively meet the China challenge by itself. At the strategic level, the United States and European allies and partners—ideally alongside democratic allies and partners in the Indo-Pacific—should work together to develop a common path forward and to regularize frequent, close strategic consultations on the challenges presented by China and Russia. Toward this end, our Atlantic Council colleague, Franklin D. Kramer, has proposed establishing a Transatlantic Coordinating Council to facilitate regular conversations.

Although the China challenge spans many arenas, the long-term competition likely will be won or lost in the economic and technology domains, where the core drivers of global power lie. A strong, revitalized transatlantic relationship is absolutely essential to prevent Beijing from dominating the key technologies and global economy of coming decades. In the key domains of great power competition, the European Union, in particular, has enormous influence due to its relative economic weight and the fact that it is a regulatory superpower, including on technology norms and standards. Thus, a tightly coordinated transatlantic approach to China is the only way that the leading democratic powers can prevail in the great-power competition. The new EU-U.S. Trade and Technology Council (TTC) is a good step toward this end, as it aims to advance transatlantic prosperity and reinforce democratic values by strengthening commercial ties and supporting the development of emerging technologies.

In addition, European and North American nations should come to a clear agreement on sharing risks and responsibilities in both the Indo-Pacific and Europe. Importantly, there should be a greater emphasis on European efforts to work with the United States to bring its vast regulatory and norm-setting power to bear in the trade and technology domains vis-à-vis China. This would involve a defensive use of economic and technological power to counter China’s offensive, government-subsidized exercise of its growing economic and technological clout. There could, for example, be an agreement not to use advanced Chinese technology in core sectors of the European and North American economies, cooperative efforts to export advanced transatlantic technologies (such as 5G) to other regions to compete more effectively with Chinese state-sponsored technology vendors, shared approaches to inward Chinese direct investments, and more.

Militarily, the two allies should get much clearer with each other about a smart division of labor in both regions, and such a framework should be based on the priority capabilities needed in each theater. Shoring up deterrence in the Indo-Pacific requires, most importantly, bringing to bear on relatively short timelines significant air and naval capabilities, while the Russian military threat generates substantial ground and air capability requirements. Thus, Europe should decidedly be the U.S Army’s number one regional priority, joined by robust U.S. Air Force capabilities, while the Indo-Pacific should demand the bulk of U.S. naval and air force assets.

More broadly, because the force requirements for both major theaters are so significant, the United States simply does not have sufficient forces by itself to handle both scenarios. Thus, the United States should greatly encourage increased European contributions to deterrence in Europe, while the U.S. military would provide the bulk of capabilities for the Asian theater alongside Japan, Australia, and other core Indo-Pacific allies. The United States needs European allies to increase their deployable force structure, as a large proportion of U.S. military forces is required to meet the rapidly growing (and pacing) threat posed by Chinese People’s Liberation Army forces in the Indo-Pacific.

A point of clarity is in order: There should not be a stark division of labor that features Europe handling European security and defense mostly on its own, while the United States devotes most of its attention to the Indo-Pacific. Instead of leading to a sharing of mutual risks and responsibilities, that would lead to a bifurcation of roles and, ultimately, feed into China and Russia’s efforts to divide the democratic world. The United States and its European allies and partners all retain an interest in deterring and, if necessary, defending against both China’s and Russia’s efforts to undermine the global order.

Therefore, routine, focused European deployments to the Indo-Pacific should be greatly welcomed; these deployments should be substantial enough to demonstrate that Europe will be committed (and well-positioned) to provide military capabilities in the event of a major conflict with China.  The United States and Europe should also look to increase the number and frequency of combined European and Indo-Pacific exercises, including (but not limited to) regularizing Quad military exercises and encouraging European allies and partners to send at least small contingents to participate in the exercises. Finally, in the face of two significant great-power military threats, the United States, Europe, and Indo-Pacific allies and partners all need to increase their military capabilities and strengthen their respective force postures.

In sum, we are in new geopolitical territory, indeed, a new era of history that future historians will name. The massive new challenges that we face require a new and very clear approach to the world’s longest-standing alliance between the United States and Europe. Together, as before, the free world can and will prevail in the competition against authoritarian systems. Nothing less than our way of life is at stake.

Barry Pavel serves as Atlantic Council senior vice president and director of our Scowcroft Center for Strategy and Security.

Jeffrey Cimmino serves as assistant director of the Global Strategy Initiative in our Scowcroft Center for Strategy and Security.