America and Russia are Headed Toward a Hypersonic Showdown 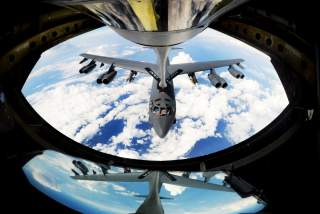 More than sixty years ago, Marshal of the Royal Air Force, Sir John Slessor, one of the authors of Britain’s nuclear deterrence concept, asked what “the great deterrent” really deterred? The answer was almost disappointingly precise. While it did prevent an all-out nuclear war and could stop a potential aggressor from embarking on a course of action that could escalate into such a conflict, Slessor did not expect that mutually assured destruction would deter “the wicked men in the Kremlin from seeking to achieve by other means their crazy dream of a Communist World dominated by Moscow.”

Today, as the world digests the recent meeting between President Donald Trump and President Vladimir Putin in Helsinki, the strategic nuclear balance has changed little, if at all. Classical nuclear deterrence theory still seemingly works in controlling direct relations between the two largest nuclear powers, the United States and Russia, even in this era of hypercompetitive “gray-zone” campaigning. However, what are we to make of the latter’s recent pursuit of hypersonic and unconventional delivery means for its nuclear arsenal? Russia is no longer the Soviet Union of sixty years ago. Then, as a multinational empire presiding over a large collection of vassals and allies, it could claim to be a viable competitor of the West, militarily, ideologically and even economically. Today, Russia clings to the title of superpower only because it possesses one of the two largest nuclear arsenals on the planet. The “wicked men in the Kremlin,” however, are just as determined as their Communist predecessors to expand their dominion. In so doing, they will not stop at using the threat of nuclear weapons, so long as these would, in their view, fall short of requiring a strategic response in kind. Their dreams may sound crazy, but there is a method to their madness.

In his March 1 speech, Putin listed a baffling array of weapons that were in the process of being added to Russia’s arsenal. Most of them are too exotic to fit into any existing military doctrine, and many have yet to emerge from the development stage. Two of them however stand apart from the rest: the heavy ICBM, successor to the long-serving Satan missile, and the Kinzhal, air-launched, pseudo-ballistic missile. These represent the two faces of Russia’s nuclear ambitions. One is designed to preserve the status quo, Russia’s part in the Mutually Assured Destruction balance of nuclear forces. The other is designed to destabilize, deceive, and under the cover of the resulting confusion, to allow the pursuit of Russia’s national interests. The latter include the territorial expansion on the Eurasian landmass and a creation of a “security belt” that expands beyond the former Soviet borders.

The “Son of Satan” (Russian designation Sarmat) is a status quo weapon. Its predecessor, the SS-18 Satan (Russian designation Voyevoda) has soldiered on for more than forty years and needs replacement. The new missile is reported to carry a heavier payload over a longer range than the old one, while still having the same number of MIRV’s (ten). It is expected to be able to carry the new hypersonic glide vehicles (currently under development). While some experts doubt specific parameters of the new missile’s performance, in general there is agreement that it is replacing the aging Satan in its strategic role. Its arrival therefore, does not per se change the deterrence balance.

The Kinzhal (Dagger, there is still no NATO designation for this system) however is very different. It is basically an Iskander (SS-26 Stone) short-range missile, of which more later, launched from the MiG-31 Foxhound interceptor. The MiG is supposed to release the missile at an altitude of approximately eighty thousand feet (twenty-four thousand meters). The missile then descends in a powered hypersonic flight, reaching a speed of around Mach 10 over a range of two thousand kilometers. In its original, land launched form, Iskander had a range of five hundred kilometers and flew at Mach 6. The aircraft launch, because it saves the boost phase, gives the Kinzhal variant its higher speed and longer range.

Reports about the Kinzhal system though contain too many unknowns. While Putin illustrated his presentation with computer graphics depicting what looked like a naval vessel, thereby implying that the missile has an anti-ship role, the missile’s ability to hit moving targets has never been demonstrated or even reported. This has not stopped the Russian media from presenting the Kinzhal as a “killer of aircraft carriers.” It is likely that the Kinzhal has some terminal-phase maneuver capability to avoid interception by missile defenses. It is however highly unlikely that its guidance system is responsive enough to allow it to successfully attack a moving target. Obviously a munition traveling at ten times the speed of sound would have to be highly accurate to strike even a static target since, at these velocities, even a small course error could translate into a wide miss in the impact area. Moving targets would therefore present all sorts of problems. As Pavel Felgenhauer has suggested, it is much more likely that the system was specifically designed to attack stationary missile defenses in Romania, which are located beyond the range of land-based Iskander missiles.

Like the Iskander, the Kinzhal can carry a nuclear charge. In this configuration, its precision may be just sufficient to be used against large formations of ships like carrier groups. The MiG-31, an aircraft whose design dates back to the early 1970s, has a very substantial radar signature and will be particularly visible in the expected, high-altitude launch profile. It is therefore likely that in times of escalating tensions between Russia and NATO, any flight of a MiG-31 within a given radius from NATO naval assets will be treated as a potential nuclear attack. The MiG-31’s high visibility in this case only adds to the confusion and uncertainty, which Russia may be able to use to its advantage.

The availability of nuclear warheads in this system is an indication that Russia is trying to diversify its nuclear deterrence forces vis-à-vis the United States. The fact that these missiles are both hypersonic and nuclear-capable means that Russia’s ability to strike targets from tactical to intercontinental ranges (given the range of the missile plus the range of the aircraft) is essentially an expanded capability. With the invulnerability to interception that hypersonics confer, the Kinzhal system may thus have a valuable “destabilizing” element to it when considered alongside the other systems available. This makes it something of a “game-changer,” which is probably why it has so much emphasis at the moment. This supposition is further backed up by the fact that Russian aircraft have been observed conducting upwards of 250 sorties by April 2018, presumably trying to perfect the missile-delivery system in short order.

In passing, and given the Kinzhal’s heritage, it is probably worth considering the likely objectives behind the development of the original Iskander series. The Iskander-M is a mobile, short range, ballistic-missile system which is fully hypersonic in its terminal phase. Unlike the Kinzhal, of which only few have been delivered, the Iskander is already serving in large numbers. The latest reports mention at least 120 launchers in active service. Each launcher can carry two missiles. The missile, flying in a quasi-ballistic trajectory and conducting avoidance maneuvers, is specifically designed to knock out stationary missile defenses within a five hundred kilometer range, with the hypersonic speed giving it an invulnerability to all but the most sophisticated defense systems. It is therefore an almost “tailor-made” weapons system for influencing events in Russia’s near abroad. The missile itself has an unusual, unitary design, with the warhead and engine flying as one, all the way to the target. The guidance system is a combination of inertial and optical devices with the latter being used in the terminal stage of the flight. At least one source mentions an active-radar homing device as an auxiliary terminal-guidance system. The circular probability of error is reported to vary between one and thirty meters.

Iskander launchers can accommodate both conventional and nuclear armed missiles. To complicate matters further, they can also launch long-range cruise missiles. This latter system is something of an enigma. Sometimes referred to as an R-500, with a maximum range of 500 kilometers, it might in fact be a version of the 3M-14K Kalibr (SS-N-30A Sizzler) which has a much longer range of 2,500 kilometers and can carry a nuclear warhead. Significantly, any land deployment of this particular missile (which has already been deployed on Russian naval vessels) would be a violation of the Intermediate Range Nuclear Forces (INF) Treaty. Not surprisingly and somewhat unconvincingly, Russia has categorically denied any such violation.

Finally another potential, treaty-violating missile is the RS-26 Rubezh (no NATO designation yet) which might be considered by some to be an ICBM, and therefore outside the confines of the INF Treaty. This is because in a recent flight test, it flew a distance of more than 5,500 kilometers. However, with a full payload, the range is likely to be well below 5,500 kilometers, making it in violation of the INF Treaty. The Rubezh is in fact a truncated version of a proper ICBM, Yars (which itself is a replacement of the Topol, NATO designation SS-27 Sickle B). Yars has three stages, Rubezh only two. The missile is expected to have two configurations: one with a single warhead and another with a MIRV’ed one. Both configurations are reported to be capable of breaking through existing missile defenses.