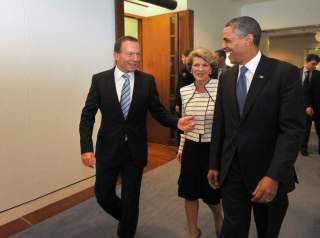 Through a series of missteps since 1990, we have become progressively more enmeshed in American strategic and military affairs. This has been achieved by close collaboration between our armed services, and with the agreement of both major Australian political parties. It is a mistake. Major issues were never put to the Australian public. It was just assumed that these steps would be good for Australia. There was never a debate.

The idea of interoperability of our armed services is something that has, of course, been assiduously promoted by the United States. It has influenced many decisions relating to military operations, including the kind of equipment that we procure. It has in part influenced the appointment of the Australian Army’s Major General Richard Burr as deputy commander of U.S. Army Pacific, in charge of sixty thousand American troops, and the part-time deployment of a frigate as part of the USS George Washington’s escort. It is also relevant to our dependence on U.S. satellites for communications.

There are, however, two factors that tie us more closely than any of these events to America’s military machine and strategic objectives. The first is the U.S. military base in Darwin. If U.S. leaders wish to use the air-ground task force from Darwin to attack some target—to use it in support of their defense commitment to Japan, for example—they will not ask an Australian prime minister first. They will do it, and Australia will be told about it later. There is nothing new or unique in that. It is the way a great power behaves. But the consequence of that is that we can hardly say we are not complicit in the actions of that task force when it has taken off from Australian soil.

More important still are the changed purposes and operations of Pine Gap. This used to be a largely defensive facility. It was, more than anything else, an information-gathering operation of significant importance. Changes in communications and weapons technology, and their application to a great variety of U.S. weapons systems, from drones to longer-range missiles, have altered the character of Pine Gap. Information from Pine Gap is also used for missile defense (which China regards as vitiating its nuclear deterrent) and for targeting a range of modern offensive missiles. This would give Pine Gap a new and urgent relevance if a conflict between China and Japan involving the United States developed into a serious crisis. It is Pine Gap, above all, that makes it impossible for Australia to say that it is not involved.

THUS, STEP by step, discreetly, even secretly, successive Australian governments have allowed a situation to develop in which if America goes to war in the western Pacific, we will have no option but to go to war as a direct consequence. If Australia sought to stand aside, it would not be believed. We have never before been in such a situation. This situation is not compatible with Australian integrity or with Australian sovereignty. Australians do not realize that America’s capacity to declare war and include us is far greater than the power Britain had over the Dominions.

No foreign power should have that control over Australia, and certainly not a United States whose values are different and whose strategic decisions have been shown to be ill balanced and dangerous. Australians are unaware that the wars in which we have followed America were outside the terms of the ANZUS Treaty. Our commitment to the United States ties us to its values system and denies us the opportunity to decide our own fate.

There are several steps that Australia should take to rectify its previous shortcomings. For a start, the task force in Darwin would need to be moved to some other location outside Australia. This should be possible to accomplish in a relatively short time frame. The facility at Pine Gap would need to be closed, as we cannot control how America uses the intelligence it gathers from that site. Because it is a complex facility, we should give America time to do this—perhaps four or five years. However, Australians working at the base should be withdrawn at the end of six months. This would clearly result in implications for our shared intelligence arrangements, especially with Britain and America. When New Zealand left the ANZUS Treaty, it was not cut out of the “Five Eyes” intelligence operation. There is no gainsaying that Australia may well find access to American military equipment diminished. But this is not necessarily a bad thing. We have sometimes bought American equipment because it aided strategic cooperation even when it was not the best equipment. There are a number of countries that are providers of quality military hardware.

Another step that Australia should take is to ensure that its diplomatic facilities throughout East and Southeast Asia are reinforced to prepare for more active diplomacy in our own part of the world. Australia needs to reinforce its support for UN agencies and work more effectively both bilaterally and through the UN, with other middle-ranking and like-minded powers. Such approaches would add to stability throughout our region and over time greatly increase our capacity to help mediate difficulties between states.

Of course, all of this would involve greater cost, possibly requiring a boost in Australian defense spending to about 3 percent of GDP. Until now, we have had defense on the cheap, hiding behind the American war machine, at too great a cost to Australian nationality and respect. At the end of the day, we need to ask ourselves what Australia’s independence—Australia’s integrity—is worth to Australians. Australia must regain the ability to deny any other power the capacity to decide whether we stay at peace or go to war. Only by embarking upon a new course can Australia recapture its squandered sovereignty.

Malcolm Fraser is the former prime minister of Australia.