America Becomes What Its Founders Feared 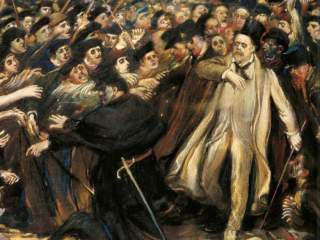 Alexander Hamilton once remarked, “The People, sir, are a great beast.” During American presidential campaigns, it is obligatory to celebrate "the American people." In all such conspicuous tributes, whether the candidate is a Democrat or Republican is largely irrelevant. What really matters here is that banality pays. To be sure, each visceral tribute can yield the contender a predictably useful electoral mantra.

Still, there exists a residual problem with these seemingly benign references. Most importantly, their ritualized appeal to an entirely mythical "American people" reflects an invented or contrived history of the United States. It may indeed offer presidential candidates an expedient and apparently risk-free premise for success at the polls, but it is also patently false.

Upon even the most cursory examination, our foundational political history will reveal an utterly stark contempt for popular rule.

It is correct, of course, that the white, propertied men (no women) who drew up the Constitution in Philadelphia, during the summer of 1787, created a document that was stirringly republican. Nonetheless, they did not believe in democracy, not for a moment. Rather, imbued with the cynical philosophy of Hobbes, and the relentlessly severe religion of Calvin, they had eagerly expressed very strongly anti-popular sentiments.

There is more. Such fully understandable attitudes reflected not only the founders' most basic political ethos, but also the corollary precepts of their subsequent public policies.

For Edmund Randolph, the evils from which the new country was suffering had originated in the "turbulence and follies of democracy." Regularly, Elbridge Gerry spoke of democracy as "the worst of all political evils," and Roger Sherman hoped that "the people . . . have as little to do as may be about the government." Hamilton, charging that the "turbulent and changing" masses "seldom judge or determine right," fervently sought a permanent authority to "check the imprudence of democracy." For Hamilton, the American People represented a "great beast."

George Washington (remember him?) soberly urged the delegates not to produce any document, merely “to please the people."

Today, as America prepares to vote again in November, we neglect that the country's creators had displayed an immutable distrust of democratic governance. With literally no more than a half-dozen exceptions, the men of the Philadelphia Convention were scions of wealth and privilege. For them, any expectations of serious thought by the general population would have been simply unfathomable.

Said the young Gouverneur Morris, in a candid quote that speaks volumes about the true origins of our current national democracy, "The mob begin to think and reason, poor reptiles. . . . They bask in the sun, and ere noon they will bite, depend on it."

"Poor reptiles." What a metaphor. There must, one will now likely inquire, still be some prominent exceptions? What about Benjamin Franklin, for example, a "man of the people" if ever there was one? Isn't that an unassailable description of Franklin, one we had all dutifully accepted, back in the fifth grade?

Well, consider this. In reality, Franklin remarked, on several occasions, that any conceivable public capacity for purposeful citizenship would have to remain hidden and improbable. President Washington, in his first annual message to the Congress, revealed similarly compelling apprehensions about meaningful public participation in government. The American people, he had then sternly warned, “must learn to distinguish between oppression, and the necessary exercise of lawful authority"

Much as we don't care to admit it, especially at election time, the founding fathers were largely correct in their plainly expressed reservations, but for all the wrong reasons. Contrary to early expectations, we the people have displayed a more-or-less consistent capacity for deference to “lawful authority.” Yet, we have also shown a persistent unwillingness to care for ourselves as individuals, as singular persons, and as correspondingly good citizens.

Now, a "mob" assuredly does define America—not the same mob feared by Hamilton, Sherman and Morris, to be certain—but a dangerous mob nonetheless.

Who are its members? Unmistakably, they are rich and poor, black and white, easterner and westerner, southerner and mid-westerner, educated and uneducated, young and old, male and female, Jew and Christian, Muslim and Hindu, Buddhist and atheist.

It is, in some respects, exactly as the founding fathers had feared, a democratic mob, but its most distinguishing and debilitating features are not poverty, or lack of formal schooling (a particular concern of Jefferson), or even a routinely shameless vulgarity. They are, instead, the flagrant absence of any decent self regard, courage or interest in serious thought. Although it is undeniable that millions of Americans dutifully do attend schools and universities, there is precious little in those institutions to offer anything more than a discernibly thin veneer of authentic learning.

As to the more general public, it averages reading less than one book per year, and that book is inevitably what is then being recommended by equally thoughtless arbiters of mass taste.

Sadly, we Americans inhabit the one society that could have been different. Once, in commendable defiance of the founding fathers, we had cautiously nurtured a potential to become more than a mob. Then, Ralph Waldo Emerson had described a much younger nation, one still motivated by industry, intellect and "self-reliance," not by conformance, consumption, fear and (long before Kierkegaard, and before any possible loss of Facebook "friends") "trembling."

Where, today, is the individual American citizen, the Kierkegaardian “single one?” For the most part, he or she no longer exists. In present-day America, it doesn't matter if the multitude is lovingly sublime or hideously obscene, so long as one is permitted entry to the mass, and thereafter allowed to belong.

America is largely about "fitting in." In these now desperately frightened United States, especially during an election year, demos is no longer a preferred path to civic virtue, but rather a suffocating valley of imitation, mediocrity, amusement and eventual despair. Whatever our historic misunderstandings of the founding fathers, we Americans have somehow managed to come a distressingly long way from the ancient Greek belief that each person should be honored for his or her individual worth.

In the still-insightful words of Pericles, the great Athenian statesman, "Each single one of our citizens, in all the manifold aspects of life, is able to show himself the rightful lord and owner of his own person, and do this, moreover, with exceptional grace and exceptional versatility."

"Exceptional grace, and exceptional versatility." Can we even mention these admirable traits in the same breath, as the names of our leading presidential contenders? Heaven knows, it's a rhetorical question.

In America, especially in an election year, the overriding goal for millions is perfectly obvious. It is an allowance, or at least a dispensation, to chant nonsense, in chorus. Always, the chanting must be done in chorus.

It is, therefore, as a gravely shallow mass society, that we Americans now choose to define both our private and our public lives. Somehow, in part by surrendering all responsibility to educate ourselves seriously, we have managed to deform the republic and our individual personages at the same time. Even in our major universities, once a seemingly last refuge for original thought, an unshakeable ambience of mimicry and raw commerce now reigns supreme.

Here, in the onetime "temple of intellect," virtually every student has willingly become a tangible commodity. Here, almost every intellectual effort is promptly measured and evaluated as a potentially marketable product.

The underlying American malady is not difficult to diagnose. We the people want comfort and easy wealth, but very little else. The American public, now so cravenly praised by presidential candidates, has little recognizable genuineness to commend itself. In many obvious respects, in fact, it already fulfills early Roman appraisals of the plebs; that is, as an unambitious and downtrodden mob, one wishing only to learn what is demonstrably practical, a mass roughly comparable to the ancient Greek hoi polloi, a shapeless herd (a term of both Nietzsche and Freud) that casually celebrates the sovereignty of unqualified persons.

A summation of these demeaning but correct appraisals was already well familiar to America's founding fathers, primarily by way of Livy. "Nothing is so valueless," said the Latin author, who was familiar to most of the founding fathers, "as the minds of the multitude." Now, recalling Livy, America's core enemy is intellectual docility, a cheerlessly uninquiring spirit that knows nothing of truth, and, above all, wants to know nothing of truth.

In his Notes on the State of Virginia, Thomas Jefferson proposed an improved plan of elementary schooling in which "twenty of the best geniuses will be raked from the rubbish annually." Today, of course, it is inconceivable, and for very good reason, that any presidential aspirant could ever refer to his fellow Americans as "rubbish." Yet, this grotesque analogy expressed the unambiguous sentiment of America's most famous early populist, and later, the new republic's third president.

No reasonable person could argue that our current presidential contenders should display the fervidly antipopulist sentiments of America's founding fathers. They could never be elected. But, at the same time, any more shameless pandering to “the American people,” by these candidates, and without any related expectations of individual citizen responsibility, can only further impair and defile our already wounded electoral process.