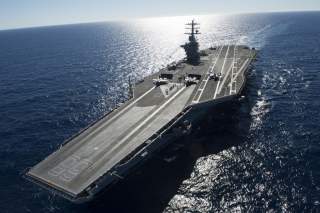 The Permanent Court of Arbitration in The Hague released a stinging rebuke to China in last week’s ruling on the arbitration case brought by the Philippines. Philippine presidents Benigno Aquino III and Rodrigo Duterte both risked their relations with China by initiating and, in the latter case, not acquiescing to Chinese demands that they withdraw the case. The Philippines should be strongly supported by the United States and our allies in this moment of need, including through U.S. naval enforcement of the ruling and U.S. ratification of the UN Convention on the Law of the Sea.

The intensity and unanimity of the court’s ruling was a surprise to most analysts, and must feel like a crushing humiliation to Chinese officials. China reacted swiftly and with equal intensity. “The arbitration tribunal made the illegal and invalid so-called final verdict on the South China Sea dispute on July 12,” China said. “Regarding this issue, China has made the statement for many times that it is against the international law that the Aquino III administration of Philippines unilaterally requested the arbitration. The arbitration tribunal has no jurisdiction on this matter.”

According to the official newspaper of the Chinese Communist Party, the People’s Daily, “Chinese President Xi Jinping said China will not accept any proposition or action based on the decision Tuesday by the South China Sea arbitral tribunal.” The paper made a fairly transparent threat to Chinese investment and trade in the Philippines, based on the “instability and insecurity” caused by the arbitration case.

The editor-in-chief of China.org.cn, Wang Xiaohui, called the arbitration a “farce” and a U.S.-led conspiracy. He highlighted U.S. deployment of two aircraft carriers to the South China Sea, negative coverage of China in U.S. media and by U.S. officials, the United States “colluding” with Japan, U.S. “sabotage” of the ASEAN-China relationship, an “ulterior motive” behind THAAD missile deployment in South Korea, and the United States “manipulating” the tribunal to contain China and maintain U.S. “global hegemony.” There was a real undercurrent of hatred in these claims, which augurs badly for peace and stability in the South China Sea.

The newspaper editor even claimed that the timing of the Hague court’s announcement was a U.S. calculation. “The timing of the announcement totally reflected the U.S. calculations as June 30 was the date that the new Philippine President Rodrigo Duterte was to be sworn in,” according to Mr. Wang. “Picking this date to announce the verdict represents no more than a backing up of the new Philippine government, a move that the U.S. hopes will minimize the possible improvement between China-Philippine relations.”

This deterioration in China-Philippine relations was what actually happened, but it could have gone the other way. I always thought the date of the ruling, just one or two weeks after the new president was sworn in, was to allow for the new administration to make a deal with China. As it turned out, China tried to make a deal with President Duterte, who refused to give up his sovereign claims and said so plainly after a meeting with the Chinese ambassador to the Philippines. That too, must have been humiliating for China.

Angered and humiliated, China is using the ruling primarily to try and outrage Chinese citizens, short of causing destabilizing protests, and thereby consolidate Chinese Communist Party control of the country. China’s main worry is internal stability and the maintenance of party control. The official Chinese reaction so far may seem tone-deaf from an international perspective, but it will gain enough support in China to actually strengthen Chinese Communist Party popularity.

So, domestically, China is so far a winner. What comes next, though, will have huge repercussions on whether China stays a winner domestically, as well as for international law, U.S. alliances in Asia and abroad, and the future of the Chinese political system. If the United States and its allies enforce the international court’s ruling, for example by protection of Philippine fishermen at Scarborough Shoal, international law and the credibility of U.S. alliance commitments will be strengthened, and the credibility of the Chinese Communist Party will be weakened.

On the other hand, if China is allowed to ignore the ruling, international law and U.S. credibility will suffer. Regional diplomats and Chinese citizens will see the Chinese Communist Party as powerful and strategic, giving the party more followers both domestically and internationally.

China’s humiliation, and a lack of an enforcement mechanism for the UN Convention, could lead China to attempt to punish the Philippines for the arbitral ruling. Such punishment could attempt to prove the strength of China to domestic and international constituents by punishing the Philippines on several levels:

1. Building a military base on Scarborough Shoal, which a Chinese official stated as an intention for 2016.

2. Towing the Philippine Navy ship Sierra Madre off Second Thomas Shoal, which China threatened to do shortly after activists resupplied the marooned boat in late June.

3. Decreasing trade and investment in the Philippines, as threatened in the People’s Daily.

President Duterte has called on the United States to step in and affirm its support for the Philippines militarily, and counter China’s prolific economic offers. We and our allies should do even more. The international court has spoken, and the world is watching the U.S. reaction. Will the ruling be enforced? Or will China get away with it, and thereby be strengthened materially and in the court of public opinion? There are several key measures the United States should take:

1. President Obama should take a strong position in support of not only Philippine maritime claims, but its territorial claims as well. The United States should immediately move naval forces, in concert with the Philippine Navy, to protect Scarborough Shoal, the Sierra Madre on Second Thomas Shoal, and other Philippine-held shoals, reefs and atolls. President Obama should move U.S. naval forces to all Chinese-held shoals, reefs and atolls within the Philippines’ EEZ—most notably Mischief Reef. The court found that China’s artificial island building is illegal, and now enforcement pressure needs to be imposed on Chinese holdings within the Philippines EEZ such that China removes itself from the area.

3. The U.S. Treasury and Commerce Departments should aggressively move to ensure that the Philippines is not hurt economically by Chinese withdrawal of investment and trade from the Philippines as a mode of punishment. Whatever assistance can be given in terms of railroad development, tourism, and Philippine agricultural exports—all of which China mentioned as possible sanctions against the Philippines—should be supported by new U.S. trade and investment.

We shouldn’t expect the relatively militarily and economically weak claimant countries to stand up to China alone. We have a dog in this fight, and the outcome will strengthen or chasten China. It will strengthen or discredit the United States. We should stand shoulder-to-shoulder with the Philippines in their hour of need. We need to be 100 percent behind the Philippines to encourage them to make the right decisions against China. There are risks involved, but anything less yields territory, power and confidence to China. Act now, or the future defense of our allies in Asia will be even riskier and more difficult.

Anders Corr founded Corr Analytics Inc. to provide strategic analysis of international politics. He is publisher of the Journal of Political Risk. His areas of analytic expertise include global macro, quantitative analysis and public opinion, and he maintains a global network of regional and sector-specific experts.