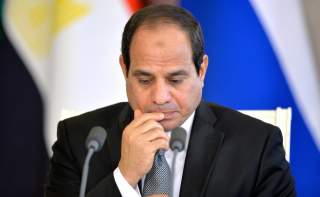 Since Egyptian President Hosni Mubarak was overthrown by mass protests on February 11, 2011, the United States has struggled to convert its $1.3 billion annual military aid provisions to Egypt into consistent leverage over Cairo’s internal policies and international conduct. Instead of transitioning to democracy like many U.S. policymakers predicted, Egypt under President Abdel Fattah el-Sisi’s rule has set new standards for political repression. As Egypt has become economically dependent on the Saudi Arabia-led Gulf Cooperation Council (GCC) and strengthened its relationship with Russia, many U.S. foreign-policy analysts have called for a downgrade in the U.S.–Egypt strategic partnership.

Despite underlying tensions between Washington and Cairo, the United States should not dial down its alliance with Egypt. Sisi is on the cusp of realigning Egypt’s foreign policy in a way that could greatly benefit U.S. interests. Egypt’s refusal to make vital economic reforms, and Sisi’s criticisms of GCC policies have strained Cairo’s relationships with its strongest regional allies, Saudi Arabia and the United Arab Emirates (UAE). If the GCC threatens to cut or suspend aid to Cairo, Sisi will likely ask the United States to intervene on his behalf to ensure that Egypt avoids insolvency. If Egypt strengthens its relationship with the United States from a position of vulnerability, the United States could regain its former leverage over Egypt and greatly expand its influence in the Middle East.

Since the 2013 coup that propelled Sisi to power, Saudi Arabia and the UAE have been the primary providers of financial assistance to Egypt. However, GCC business elites have recently expressed frustration with Sisi’s unwillingness to implement necessary economic reforms. Even though Egypt is running an annual budget deficit of 12 percent of its GDP, the Egyptian parliament has refused to pass legislation to impose a value-added tax, end largely nonproductive food subsidies and reduce the size of Egypt’s bloated civilian bureaucracy.

Sisi has also antagonized his GCC patrons by spending much of the GCC’s financial assistance to Egypt on inefficient government programs and status-building projects. These expenditures have prevented mass protests against Sisi’s government, but have not improved Egypt’s economic competitiveness. To appease popular discontent caused by food price inflation, Sisi has pegged the Egyptian pound to an artificially high rate, and provided extensive government subsidies to wheat farmers. These subsidies have incentivized corruption. Egyptian government officials frequently exaggerate Egypt’s grain production to personally profit from government funds. Sisi has also used GCC funds to invest in the modernization of the Suez Canal. Modernizing one of Egypt’s most symbolically significant landmarks has rallied Egyptian nationalists around Sisi, but large-scale corruption has caused Egyptian government revenues from the Suez Canal to decline over the past year.

In response to Sisi’s misappropriation of GCC funds, Saudi Arabia and the UAE have threatened to reduce their financial assistance provisions to Egypt. In April 2016, a prominent Saudi business leader told Reuters that Riyadh would soon transition away from providing unconditional aid to Egypt in favor of providing loans and targeted investments. The UAE’s withdrawal of economic advisors from Egypt earlier this year was a striking display of frustration with Sisi’s intransigent opposition to economic liberalization reforms.

In response to wavering commitments from Egypt’s GCC sponsors and surging budget deficits, Sisi signed a landmark $12 billion bailout deal with the International Monetary Fund on August 11. As IMF funds will be accompanied by strict economic conditions, Sisi’s acceptance of IMF money demonstrates to Egypt’s GCC patrons that he is determined to reform Egypt’s struggling economy.

Even if Sisi takes belated steps towards reforming Egypt’s sclerotic economy, rising anti-Saudi sentiments amongst Egyptian nationalists could force Sisi to distance himself from Riyadh to strengthen his domestic position. Sisi’s April 2016 handover of two Red Sea islands to Saudi Arabia was subsequently revoked by an Egyptian court and fuelled rare antigovernment unrest on the streets of Cairo.

To demonstrate that he has not surrendered Egypt’s sovereignty to the GCC for financial assistance, Sisi has pandered to popular perceptions that the GCC is undercutting Egypt’s sovereignty. Even though a leaked tape revealing Sisi’s derision for his Gulf state donors strained Egypt’s relations with the GCC, Sisi has never publicly apologized for his comments. To demonstrate to Egyptian nationalists that Cairo is not becoming a client state of Riyadh, Sisi has refused to provide military assistance to Saudi Arabia’s anti-Assad campaign in Syria and air war against Houthi rebels in Yemen.

If Egypt does not implement sweeping economic reforms or contribute to the GCC’s military interventions, Saudi Arabia and the UAE could conclude that the costs of bailing out Egypt are unjustifiably high. As David Schenker noted in his May 2016 article for the National Interest, the economic fallout of low oil prices could cause Saudi Arabia to dramatically reduce its aid provisions to Egypt over the next two years.

If Egyptian-Saudi tensions boil over, the United States is ideally positioned to urge the GCC bloc to continue providing financial assistance to Egypt. It is the only great power that possesses long-standing security partnerships with both Cairo and Riyadh. The United States can also appeal to Saudi Arabia’s vested interest in Sisi’s survival from a position of common concern. American policymakers believe that an Islamist revolution against Sisi’s government could endanger Israel’s security and create turmoil that results in the diffusion of ISIS to Egypt. If the United States encourages the IMF to lend more money to Egypt to lessen the GCC’s financial burden and agrees to sell Saudi Arabia sophisticated weaponry for its war in Yemen, Riyadh will likely continue to provide financial aid to Sisi’s government.

By becoming the guarantor of Sisi’s political survival, the United States’s leverage over Egypt’s counterterrorism policies and international alignments will dramatically increase. To take full advantage of this expanded leverage, the United States should not make improving Egypt’s poor human rights record a precondition for improved relations. The United States should also not place undue pressure on Sisi to implement neoliberal economic reforms. Instead, Washington should adopt a pragmatic goal-oriented strategy towards Egypt to ensure that Sisi’s behavior becomes more amenable to U.S. interests.

In particular, the United States should pressure Sisi to modify two policies that have threatened America’s security and eroded its influence in the Middle East. First, the United States should make any intervention on Sisi’s behalf conditional on the Egyptian government developing a coherent strategy to resolve its conflict with militant groups in the Sinai Peninsula. The Sinai insurgency first emerged as a major security threat during Mubarak’s rule. However, coordinated attacks by terrorist groups like the Sinai Province (SP) have become more frequent since Sisi was sworn in as Egypt’s president in June 2014.

In a November 2015 briefing paper, Brookings Institution senior fellow Shadi Hamid directly linked the rise of the Sinai insurgency to Sisi’s repression of Sinai Egyptians. Even though SP leaders have expanded their cooperation with ISIS in recent months, Sisi continues to deny the burgeoning security crisis in Sinai and has not sent government overseers to regulate the conduct of Egyptian military officers in Sinai.

As Sinai insurgent groups have a history of attacking Western tourists to draw international attention to their cause, U.S. policymakers should pressure Sisi to increase government oversight of local military officials in Sinai. Closer government supervision of military personnel in Sinai will reduce the prevalence of corrupt deals between Egyptian generals and Sinai tribal leaders that obstruct Egypt’s counterterrorism campaign.

If Sisi scales back the Egyptian military’s repression in Sinai, the likelihood of durable peace settlement between Cairo and Sinai insurgents will increase tremendously. A successful resolution of the Sinai conflict would be a powerful demonstration of Egypt’s viability as a U.S. counterterrorism partner. It would also justify a U.S. intervention on Sisi’s behalf to secure GCC aid provisions to Cairo.

Second, the United States should use any leverage it gains over the Egyptian government to breach Sisi’s rapidly strengthening alliance with Russian president Vladimir Putin. The current Moscow–Cairo partnership is rooted in Russia’s recognition of the Muslim Brotherhood as a terrorist group, and Egypt’s support for Russian airstrikes against Al Qaeda’s former affiliate in Syria, Jabhat al-Nusra.

To erode the strength of the Russia–Egypt partnership, the United States should emphasize the synergy between its approach to resolving the Syrian civil war and Cairo’s strategic interests. Egypt shares Washington’s alarm at the prospect of Iran being emboldened by Syrian President Bashar al-Assad’s territorial gains. As Oren Kessler argued in August 2015, Egypt is a vital member of the Saudi Arabia-led bloc of Sunni countries opposed to expanded Iranian influence in the Middle East. Just 15 percent of Egyptians view Iran’s global influence positively, and Sisi disdains Tehran’s cordial relationship with the Muslim Brotherhood.

The United States’ tacit acknowledgement that Assad is unlikely to be swiftly overthrown also has synergy with Cairo’s views on Syria. Egypt is opposed to a rapid regime change in Syria, as it fears that a Sunni Syrian government would incorporate Islamic extremists into its coalition. If these extremists diffuse to Egypt, the Sinai could become a nexus for terrorism. Rising Islamic extremism in the Sinai Peninsula could increase the risk for a terror attack on Egyptian soil like the 1997 Luxor massacre. Sisi is keen to avoid this scenario, as Egypt’s perceived vulnerability to terrorism would deter foreign investment in Egypt and eviscerate the remnants of Egypt’s declining tourism industry.