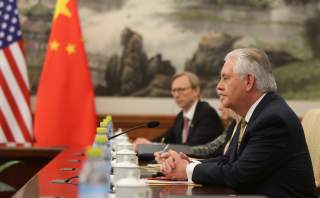 The Romance of the Three Kingdoms, based on real historical figures, was one of the most epic and gripping novels ever written. It teaches the lessons of the Art of War (孫子兵法) better, and in an easier-to-understand form than Sun Tzu (孫子) himself in his famous treatise.

The romance of three states: China, the United States and Taiwan, is still very much an ongoing saga, and awaits a fuller treatment. This tale is even more epic, no less gripping and affects directly—and indirectly—nearly half of the population on earth.

Even though it has now become commonplace to acknowledge that China is the biggest challenge that the United States faces in the twenty-first century, the American foreign-policy establishment is still obsessed with Moscow as the implacable enemy; despite the fact that the PRC succeeds in preserving itself, while the USSR met its demise in 1991.

Why isn’t China taken more seriously by the American establishment? Partly it is because genuine knowledge of China remains shockingly deficient among America’s leaders, and many myths and cliches about China continue to hold sway. The first principle of the Art of War is “know thyself, know thy opponent.” Only when we are clear-sighted and realistic about ourselves and our opponents, can we come up with workable solutions.

China has long been misperceived by the West. For a long time, it didn’t matter; because China was far away, and it was in its own world. Few Western sinologists, until the late twentieth century, could speak Chinese, let alone read or write it. Since most in the West know even less about China than the sinologists, they could get away with knowing pitifully little, and being very often wrong without being challenged.

Western sinologists like to say that China has always been ruled by tyranny, so the current regime is simply a continuation of the past. Not true. Emphatically not true. China has never seen a tyranny as brutal, abusive, intrusive, controlling and lethal as the China’s Communist Party (CCP). Mao Zedong’s totalitarianism did not come from the Chinese tradition, and had not existed in China before in any form.

No rulers before Mao, and that includes the Mongol invaders, had ever ruled China by using mob violence; but Mao did, repeatedly and callously unleash lethal chaos. In fact, Mao caused more Chinese to die than all the previous invaders of China combined, and that includes the Japanese using modern weapons and heavy bombing of civilian population centers.

No previous rulers had even attempted to control every aspect of Chinese people’s lives the way the CCP did, and that includes where they lived, worked, traveled and earned a living; what they owned, bought, ate and used; how they thought, spoke, wrote, published and created art; whom they could marry, fraternize and associate with. During the Cultural Revolution, Chinese didn’t even have the right to remain silent.

Many have said that things have changed since the onset of “reform and opening.” Some things have changed. The most consequential change was that Deng Xiaoping had replaced Mao’s mob violence with state violence, which is not nearly as insane, and far more controllable, as the means to rule. But far more things have remained the same. The state remains in control of all forms of media, including social media. The state still imposes controls on education, from kindergarten to tertiary levels and beyond. The state still dictates what the children learn and what could not be learned. The state still proscribes what the people can know, and what they cannot know. The state has upgraded its internet to monitor every move of its urban residents, and an army of trolls paid to censor every post or word not approved by the state. The state still owns all the land, and the people can only lease properties on the land for seventy years—this is totally alien from a culture with a tradition of capitalism and land ownership going back thousands of years. The regime’s use of state violence against its own people is brutal and routine; imprisonments often are arbitrary; and miscarriages of justice common. China’s Communist Party decides the size of the family, enforces birth quotas with security agents monitoring menstrual cycles, forces people to get sterilizations and abortions, inflicts heavy fines and home destruction for those who disobey. It was—and is—a totalitarian instrument so gross and so barbaric that it has never existed anywhere else on earth before. Moreover, the CCP's Leninist system, which has more in common with Russia’s medieval serfdom than with any modern or traditional Chinese political practices, could not—and cannot—be reformed. With all its control levers firmly in place, any totalitarian or dictatorial practices, both tried and untried, can be activated at will.

The three most influential books that had shaped for decades Americans’ perceptions of the CCP and China were Edgar Snow’s Red Star Over China, Theodore White’s Thunder Out of China and Barbara Tuchman’s Stilwell and the American Experience in China. These books were written by authors who did not know Chinese, had spent very little or no time in China, and were not familiar with Chinese politics, history and culture. In short, they were all prime prospects for manipulation, and they were—Snow by Mao, White by Zhou Enlai and Tuchman by ideologically committed American sinologists.

It is in this manipulated and misinformed milieu that the so-called “panda-huggers” emerged, and have dominated China policy since 1971. They claim they have preserved peace—a very dubious claim, since China was not in any condition to fight the United States. The PRC was so weak and ravaged at the time that the United States probably didn’t need to make any concession to mend relations, or to divide further the Sino-Soviet alliance, badly strained since 1957, and then on the edge of further border and ideological clashes. Yet, the knowledge of China was so shockingly deficient among America’s elite that the domestic reality of the PRC did not come into their calculations at all. The derecognition of Taiwan in 1979 was also an unnecessary concession. The panda huggers have since compounded this monumental error by granting the PRC Most Favored Nation Status (MFN). Renaming it as Permanent Normal Trade Relations (PNTR) still doesn’t make it “normal” to enrich the most barbaric tyranny China ever had.

Two decades on, it has been amply demonstrated that making the CCP rich didn’t and couldn’t change the CCP—it has only made them more arrogant, and increased the harm they could do to the U.S. trade position and the global trading system. Offering the PRC “stakeholder” positions has not stated their ambition, it has only allowed them better access to change the rules and norms of international institutions, and ample opportunities where they could shape American cultural spheres and marketplaces. Moreover, because of the scale of China’s labor force, and the artificially low wages and other anti-labor practices enforced by tyranny, China has, through unfair competition, devastated America’s manufacturing sector. The one-percenters in China and the United States who made the deals with each other have reaped the great benefits—now there are unprecedented numbers of billionaires in both countries. It is not just the Chinese workers who are being robbed by the artificially depressed wages, the American workers are also being deprived of good paying jobs to support their families. Moreover, many Americans are being ravaged by an opiate and prescription drug epidemic, with many of these drugs imported from China and other foreign places. Many of America’s small towns, once the bulwark and mainstay of American democracy, now lie forlorn and distressed across the continental landscape. The assertions by some experts that trade didn’t cause the loss of jobs don’t comfort or convince those who can’t find work near their homes, but only leads them to distrust the experts. Cheaper goods are no consolation to them either when they have low or no wages.

So this “grand bargain” made by the elites, which was implicit since Henry Kissinger’s secret mission to the PRC in 1971, and made explicit by James Woolsey during the 2016 presidential election campaign in an op-ed in the South China Morning Post—that the United States would accept China’s rise as long as it doesn’t challenge the status quo—was never much more than a daydream, and has already become untenable.

Those who oppose this misguided approach to China, the so called “dragon slayers,” see confrontation with the PRC as unavoidable. They are correct. Moreover, nearly half a century of appeasement not only has increased the difficulty and enlarged the area of confrontation, but because of China's rapid military modernization, which was made possible by opening the vast American market to the PRC, the level of violence of such a confrontation will now be far higher.

The sad truth is, not bothering to know enough about China’s language, culture and politics, the United States has been consistently outsmarted by the Chinese communists since the 1940s. For many years, it didn’t matter—because the United States was far superior in so many ways. This is no longer the case, because, with unwitting help from the United States, the PRC has been catching up fast.