America Can Only Deter North Korea by Ratcheting Up the Pressure 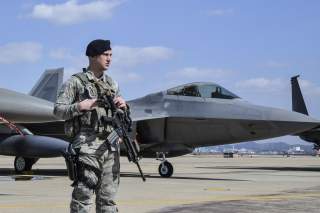 Lately, the news has centered around how the U.S. may exercise its military options in response to North Korea’s provocations. But other than objections to North Korea’s imminent attainment of nuclear-weapons capability, little has been said about U.S. objectives. Posing the usual questions such as “What if?” and “What happens next?” about different options only leads to frustration.

To quote Victor Cha’s famous phrase, “North Korea is the land of lousy options.” North Korea’s deeply buried and hardened missile sites and artillery installations just north of the dimilitarized zone are a clear and present danger to Seoul, an urban mega-center and South Korea’s capital. North Korea’s missile capability and emergent nuclear weapons are a clear and present danger to Japan, and soon to the United States. North Korea demonstrated the range and diversity of its weapons of mass destruction capability, on February 13, 2017, when it deployed and employed VX, the worst of mankind’s nerve gas weapons. VX is an exceptionally deadly agent; a very small drop is lethal. Worse, it is a persistent agent that can remain in an area—like an air terminal—to kill crowds. This episode demonstrated a very sophisticated program, and a very dangerous capability. Since there were obviously easier ways available to assassinate a family member, it’s clear that the VX attack was also intended as a message to the world.

Deterring North Korea is not a new dilemma, but perhaps it is newly compelling. Previous deadly North Korean provocations victimized the United States and Japan, as well as the Republic of Korea. The U.S. response to those provocations has set a pattern, which includes, but is not limited to:

• January 23, 1968: North Korea seized the USS Pueblo, and its eighty-three crew members. The crew members were returned after eleven months of negotiations and a faux U.S. apology. The ship is still in North Korea.

In each of these incidents, the aggrieved party wanted to strike back, to redress wrongs and settle accounts, to ensure that its outrage would not stand. These incidents—and others—came at a time when North Korea presented conventional, guerilla warfare and terrorist threats. In each case the unaffected parties urged restraint, and prevailed. In each case the damage that could potentially come from unleashing the dogs of war compelled all parties to return to the status quo ante, with U.S. and South Korea forces enforcing the armistice. So if that was the experience with past outrages and provocations, then it’s unlikely to change today with the chemical weapons threshold shattered and nuclear missile capability looming.

If the United States cannot end this threat, then what can it do?

U.S. allies, like South Korea and Japan, are a vital national-security interest. Thus, U.S. vital interests are fully engaged by the North Korea threat. The lack of U.S. success in restraining North Korea’s nuclear and missile programs since the 1993/1994 nuclear provocations that greeted the new Clinton administration should prompt the United States to question the improbability of ever reaching an agreement with North Korea on the nuclear issue. The days of dialogue, deals and sanctions have not revealed a solution. Thus, U.S. assertion that its “strategic patience” policy is over indicates that it has reached a conclusion.

“All options on the table” must include increased strength in the region. The United States must consider reintroducing U.S. tactical nuclear weapons to the region if that is deemed necessary to provide a convincing deterrent. “All options” must include a reinforcement of national, regional and global missile defense capabilities. The United States does not need more host nation support from Japan and Korea, and it certainly does not need “fee for services” payments. Instead, the country needs more combat power from its allies’ forces and more ability to operationally integrate its forces and capabilities bilaterally and trilaterally. U.S. deterrence must be reinforced by making alliance capabilities far more powerful than just the sum of separate parts.

Meaningful sanctions must be enforced. Follow the money. There are risks, but the United States must be prepared to take them. Truly effective sanctions against the regime are likely to cause regime change. If the top leadership cannot keep its cohorts in their accustomed standard of living, loyalty may be found wanting.

Additionally, the United States must be very open about its actions with China. The two countries may find some common interests. Global Times, a reliable Party organ, recently warned North Korea against another nuclear test, forecasting dire consequences for Pyongyang if it moved forward. China also registered objections about introducing Theater High Altitude Area Defense capability to South Korea. That’s an unacceptable interference in the affairs of another sovereign nation under threat. The United States can take China at its word that it has limited influence—or at least less influence than Americans think they do—with North Korea. If China can’t—or won’t—help the United States restrain North Korea, then the United States has no choice but to reinforce its alliance capabilities. And it should do that as quickly as possible.