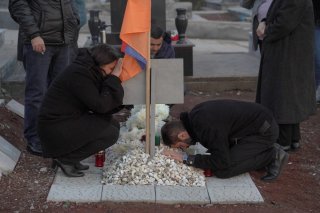 The ceasefire Russian president Vladimir Putin brokered between the Armenian and Azerbaijani leaders in November 2020 may have stopped full-blown fighting between the two European states, but it has not stopped their militaries from crossing the border into each other’s territory. Furthermore, the agreement has not prevented their forces from firing on each other, nor has it alleviated any of the hatreds that grew during the decades Armenian-backed forces occupied Nagorno-Karabakh and neighboring chunks of Azerbaijani territory. Azerbaijanis point to the nearly complete destruction and depopulation of Agdam and other towns and cities in the areas Armenians occupied for decades; Armenia recently filed a complaint with the International Court of Justice charging Baku with government-sponsored programs “directed at individuals of Armenian ethnic or national origin” in violation of the International Convention on the Elimination of All Forms of Racial Discrimination.

The ceasefire agreement provided the basis to put Russia’s troops onto Azerbaijani territory and to increase Russia’s presence in Armenia. Yet continued hostilities and the lack of progress towards a lasting resolution also serve Russian interests. It is no secret that Russia uses, and even stimulates, conflicts within and between countries on its periphery to try to re-assert control over the states of the old Soviet Union, to discredit the United States, to degrade the rules-based international order, and to enhance its global status. As in Ukraine, Moldova, Georgia, and elsewhere, Russia has used—and continues to use—the conflict between Azerbaijan and Armenia for its own ends.

Moreover, despite what U.S. leaders say about curbing Russian, Chinese, and Iranian ambitions, officials, academics, and members of the public in the region repeatedly state that the United States is needed, but sadly absent. Many in the region feel that they have no choice but to deal with Moscow.

This situation does not have to persist.

The United States has both the proven experience and capability to engage and help Armenia and Azerbaijan move towards peace, to help them improve their security and prosperity, and to show the strength and benefits of the international rules-based system Americans long fought to build and uphold.

There are a number of specific steps the United States can easily take. One is to engage in more visible diplomacy. While in-person visits by top-level U.S. officials would be ideal, virtual interactions and phone calls can yield excellent results, and given the realities of the Covid-19 pandemic, these forms of communication have become a widely accepted diplomatic norm. Such things seem mundane to an American audience, but phone conversations, as well as other engagements, between national leaders and senior Washington or Moscow officials are national news in many countries. In addition, more energetic U.S. public diplomacy flagging such high-level conversations would get the American message out to a wider audience. Furthermore, given the recent U.S. military pullout from Afghanistan, frequent, visible, and high-level contacts will re-assure the broader region as well.

Second, the United States should use its influence with both Baku and Yerevan to help build a climate in each country in which the publics will support actions their leaders agree to take for peace, prosperity, and lasting security. Decades of conflict, of inflammatory statements, and of outright hatred and fear of the other side mean sizable numbers of Armenians and Azerbaijanis do not know, let alone trust, each other. This limits both the Armenian and Azerbaijani governments’ abilities to move towards a peace agreement and eventual reconciliation. The United States should work with Armenia and Azerbaijan to establish people-to-people contacts to examine specific issues and to develop possible approaches to address them. As the experience in Northern Ireland and other conflicts shows, such Track II programs can pay important benefits.

Third, the United States should work with both Armenia and Azerbaijan to open new transportation and communication action links across the two countries and the South Caucasus. Such efforts will engender business opportunities, boost economic growth, and further the well-being of Armenians and Azerbaijanis. These transportation and communication links could be especially important for Armenia, which has isolated itself from Turkey as well as Azerbaijan due to the Nagorno-Karabakh conflict. And these projects will also stimulate the broader Caucasus and Central Asia, serving as an answer to China’s Belt and Road Initiative.

Importantly, none of these actions by the United States would entail sizeable outlays of resources. They just require a bit of initiative and commitment.

And the payoffs will be significant. Actions the United States took this past spring support this point. Following a phone call by National Security Advisor Jake Sullivan, a visit by the then acting head of the State Department’s Bureau of European and Eurasian Affairs and the U.S. Minsk Group co-chair helped broker an agreement for Azerbaijan to release a group of Armenian prisoners of war and for Armenia to provide Azerbaijan with maps showing where landmines were placed in the territory Armenia had occupied before Azerbaijan won it back in last year’s war. The action won appreciation by both Armenians and Azerbaijanis and was something Russia had been unable—or unwilling—to do.

As a top official from the region said recently, “If the United States wants to push back on the Russians and trim their sails, then it should help make peace between Armenia and Azerbaijan.” What could be more in the American interest than that?

Robert F. Cekuta is a member of the advisory board of the Caspian Policy Center, an independent, nonprofit research think tank based in Washington DC. He was formerly U.S. Ambassador to Azerbaijan from 2015 to 2018, and previously principal deputy U.S. Assistant Secretary of State for Energy Resources, as well as Deputy Assistant Secretary for Energy, Sanctions, and Commodities.