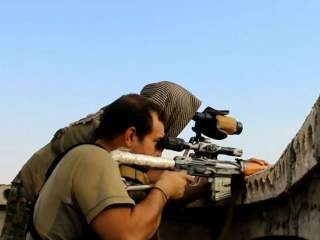 The cessation of hostilities that took effect in Syria last month has remained surprisingly durable in the face of intense skepticism (including some of our own). Not only has Secretary of State John Kerry’s painstaking diplomatic work resulted in a significant reduction in violence, but it is now presenting an opportunity for the United States to help focus already vetted and supplied moderate armed opposition groups against ISIS. It is a decision that Syrian rebel groups acceptable to the United States are beginning to take unilaterally. The United States should do all it can to take advantage of this new development.

In October, the U.S. Department of Defense suspended its ill-fated Syria Train and Equip (T&E) program, due mainly to the fact that it could not attract enough acceptable (that is, vettable) Syrian rebels to agree to fight only ISIS. While efforts have been restarted to train and equip a greater number of Sunni Arab armed opposition fighters to take the fight to ISIS in Raqqa and Deir al-Zour, the United States military will need time to ramp it up, even as pressure to defeat and destroy ISIS has risen since the terrorist attacks in Belgium.

The U.S. strategy to focus on the diplomatic track to achieve a conclusion to the Syrian civil war, even as it struggles to mobilize enough local Sunni Arab partners to displace and replace ISIS in its Syrian territory, is bearing some fruit. A multiethnic coalition of moderate Syrian armed opposition groups, all of them reportedly supplied and supported by the United States and its regional partners, particularly Turkey, has been formed to defeat and destroy ISIS. This alliance includes two of the most powerful CIA-vetted, TOW-receiving armed opposition coalitions, Liwa al-Sultan Murad and Suqur al-Jabal, and the smaller rebel groups Liwa al-Hamza, Liwa 99 and Liwa al-Mutasem, which include fighters from the U.S. military’s T&E program.

The United States recently initiated air strikes in support of this coalition’s campaign against ISIS in northern Aleppo Governorate, mainly because graduates of the Pentagon’s first Syria T&E program have been embedded within the new coalition, and are trusted to call in air strikes. But there is still much more that the United States can do to provide strategic direction for the nascent coalition. Important for U.S. strategy in Syria, the emerging coalition is entirely composed of groups that are signatories of the December 2015 Riyadh Declaration, agreeing to work toward its inclusive vision for a post-Assad Syria.

Perhaps most importantly for the future of areas that they will liberate from ISIS, this coalition supports the diplomatic efforts of the U.S.-backed Syrian National Coalition’s High Negotiations Committee (HNC), and is working with the HNC to build out a plan for supporting local governance councils the day after ISIS is removed from its areas of control. Critical to the anti-ISIS campaign will be ensuring that post-ISIS local authority is not rebuilt by ideologically extremist organizations, whether in the Manbij area, on the Syrian-Turkish border, or along the Euphrates River valley from Raqqa to Deir al-Zour.

While the Assad regime and its allies are actively trying to seize areas throughout ISIS-controlled Syria, the regime’s ability to hold, administer and stabilize the terrain that it captures is very much in doubt. This new coalition, working in concert with the HNC, is aware of this reality, and is planning for the unified civil governance and security administration that will be needed to stabilize formerly ISIS-controlled areas in northern Syria. It can also potentially serve as a platform for facilitating an armed opposition campaign against Raqqa and other areas in ISIS’s would-be caliphate.

Recently there has been a significant amount of debate over how the United States can build a complementary, but separate, armed opposition coalition other than the majority-Kurdish Syrian Democratic Forces (SDF) as a platform to expand the counter-ISIS campaign. To its credit, the SDF has been greatly effective and displacing and replacing ISIS in large stretches of the Syrian-Turkish border area, and it has seized oil fields, forward attack positions and key routes of supply and reinforcement from ISIS. However, it still struggles to attract enough Sunnis—whether Arab, Turkmen or other ethnicities—to be able to stably govern ISIS-ruled areas after the would-be caliphate has been destroyed. Turkey and a large part of the Syrian armed opposition also accuse the SDF of working actively towards the goals of the Kurdistan Workers’ Party (PKK). Kurdish forces associated with the SDF have been accused of committing ethnic cleansing against Arabs, Yazidis and Christians, further driving suspicion.

There has also been pressure and strong arguments for the United States to throw its support, and its powerful air campaign, behind a coalition of militant Islamist armed opposition groups in northern Syria that fight ISIS. Yet this coalition includes several rebel groups, including the militant Salafist organization Ahrar al-Sham al-Islamiyya, that have close and continuing relationships with Al Qaeda in Syria, and that have aided and abetted Al Qaeda’s growing power in the country’s northwest. While the United States needs to gather as many Syrian rebel organizations as it can into the diplomatic tent being pitched by the HNC, it should be wary of providing direct military assistance to groups that are working towards a similar end state as ISIS.

This moment calls for the United States to seriously consider how it can leverage the nascent moderate armed opposition coalition that is forming against ISIS, to construct rebel institutions from the bottom up that can prevent Sunni ideological extremist groups from entrenching their rule in opposition-controlled areas in the north. It is too early to tell if opposition-supporting regional players are truly willing to back off their support for the more ideologically extreme organizations in northern Syria and their close allies. Yet this new coalition provides the United States with a great opportunity to test its regional partners, to see if they are ready to back a moderate Sunni armed opposition movement that can fill governance gaps in the Syrian-Turkish border region.

One of the best outcomes of sustained U.S. support for this nascent armed opposition coalition would be the marginalization of ideologically extremist organizations, such as Ahrar al-Sham al-Islamiyya, that are powerful within the northern Syrian rebel movement. For Ahrar al-Sham al-Islamiyya, in particular, this moment is a chance for it to demonstrate its true agenda: either it supports an inclusive Syria post-conflict, or it is in fact a primary enabler of Jabhat al-Nusra and other ideological extremist organizations, and should therefore be marginalized within the armed opposition movement. This a necessary precondition to prevent rebel-ruled areas of the country from supporting the entrenchment of Al Qaeda, and to achieving an end to the conflict.

To be sure, the development of this new moderate armed opposition coalition could have great strategic impact beyond the anti-ISIS campaign, particularly in diplomatic areas, as the United States and its regional and Syrian partners work towards turning the cessation of hostilities into a blueprint to end the civil war. The United States is particularly focused on convincing Russia that there is a moderate opposition alternative to ideological extremist actors in rebel-ruled areas of the country, and that a phased transitional period into a new Syrian governance structure will not lead to enduring safe havens for transnational Salafi jihadist networks. Another audience—the diverse, multisectarian communities in the loyalist camp—will need to be shown that over time they can agree to demobilize, disarm and reintegrate their forces with areas of the country that are under the control of opposition, and that a unified Syria, even if ruled by a federal government, is possible, without endless communal war among Syrians.

Nicholas A. Heras is a research associate at the Center for a New American Security (CNAS). Bassam Barabandi is a defected Syrian diplomat and founder of People Demand Change.