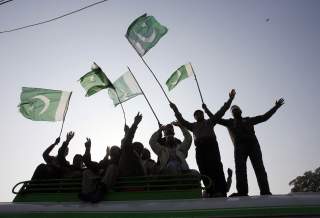 Nearly two decades into America’s War on Terror, policymakers remain perplexed about how to navigate the United States’ relationship with Pakistan, an ostensible ally that has long been accused of offering tepid support or creating outright impediments to American counterterrorism operations. While America’s relations with Pakistan were weakened by the Trump administration’s January decision to withhold over one billion dollars in security assistance from the Islamic Republic, Pakistan’s relations with neighboring China have been greatly strengthened by China’s promise of $57 billion in economic investment through its One Belt One Road Initiative. U.S. policymakers should be concerned by America’s rocky relationship with Pakistan, as well as Pakistan’s deepening economic and security ties with China. A Pakistan that is squarely in China’s orbit could contribute to a dramatic rise in security competition and an increased risk of great power conflict in South Asia. It is in America’s best interest to repair its relationship with Pakistan to prevent such a scenario from coming to pass.

America’s relationship with Pakistan has long been a complicated one. Despite designating Pakistan as a major non-NATO ally and removing American sanctions against Pakistan in exchange for its support in the War on Terror, Pakistan has long been criticized for failing to sufficiently monitor and disrupt terrorist cells located within its own borders. In recent years, Pakistan has been accused of harboring members of the Haqqani network, a Taliban-affiliated organization with multiple safe havens in the Federally Administrated Tribal Areas of northern Pakistan. Additionally, the Trump administration successfully lobbied for Pakistan to be placed on a watch list of international terror financiers, while the president tweeted in January that Pakistan has, “given us nothing but lies & deceit,” throughout the duration of the alliance.

America’s growing distrust of Pakistan’s commitment to the War on Terror has led many American policymakers to propose even stronger measures to punish Islamabad. Over the past year, proposals have been floated to sanction senior Pakistani government officials with ties to terror groups, designate Pakistan as a state sponsor of terrorism, and even eliminate Pakistan’s status as an American ally. If enacted, these proposals could further deteriorate America’s increasingly fragile relationship with Pakistan, and would cement the existing perception among Pakistan’s leadership that the United States views it as a subordinate as opposed to a partner in the fight against terrorism.

Pakistan has additional cause for grievance towards the United States. While the 2011 raid that resulted in the death of Osama bin Laden was hailed as a success in the United States, America’s military incursion into Abbottabad was viewed by many locals as a gross violation of Pakistan’s national sovereignty, an insult that was heightened by America’s decision not to notify the Pakistani government of the impending operation. Many in Pakistan have long maintained that their country’s close association with the United States, and particularly America’s continued use of drones to carry out targeted killings of suspected terrorists in Pakistan, has contributed to the durability of domestic terror cells by fueling resentment against a Pakistani government perceived to be subordinate to a foreign power.

America’s relationship with Pakistan is further complicated by its strong and growing partnership with India, a country with whom Pakistan has fought four wars since 1947. Historic tensions over the Indian-administered state of Jammu and Kashmir have resulted in numerous cross-border skirmishes in recent years, and the acquisition of nuclear weapons by both states further upped the stakes of the dispute. India has significantly increased its military, economic, and diplomatic ties to the United States over the past decade, culminating in a landmark defense cooperation agreement between the two nations signed in 2016. Pakistan, which has historically fared poorly in its conflicts against India, views these deepening ties with great suspicion. Much of Pakistan’s motivation to harbor the Haqqani network stems from its desire to cultivate it as a “strategic militant asset,” to counter Indian influence in Afghanistan, particularly in light of President Trump’s calls for India to increase its political and military involvement in the war-torn country in 2017.

While the United States has seen its relationship with Pakistan fracture in recent years, China has aggressively courted Pakistan as a potential ally. Through the promotion of economic initiatives such as the China-Pakistan Economic Corridor and the Gwadar Economic Free Zone, China has sought to create strong, durable economic ties between the two nations. China has also been more than willing to fill the gap left by American military support, and has become the largest seller of arms to Pakistan, while also laying the groundwork for greater levels of defense cooperation to protect their mutual economic and security interests. China has even initiated trilateral talks between Pakistan, Afghanistan, and itself, helping to provide Pakistan with the political inroad to Afghanistan that it has long sought.

However, it is China’s growing tensions with India that may ultimately help solidify its partnership with Pakistan. Both India and China are rising economic and military powers with aspirations of increasing their influence in South Asia, and their long-contested border has served as a recurring source of tensions. The two nations nearly came to blows in 2017 when China attempted to construct a road through Bhutan’s Doklam Plateau, a patch of land through which Chinese troops could target a vulnerable and geopolitically important piece of Indian territory known as the Siliguri Corridor. India’s fears of Chinese encirclement, which are heightened by China’s increased naval presence in the Indian Ocean, have caused it to view China’s deepening partnership with India’s western neighbor Pakistan with suspicion, especially since China’s One Belt One Road Initiative is set to encompass territory in Pakistan-administered Kashmir that India has long claimed as its own.

China has long been projected as the country most likely to emerge as a peer competitor to the United States in the coming decades, and such an ascension would only serve to strengthen the growing ties between both China and Pakistan and the United States and India. Fearing that China’s rise could threaten its own, India would likely seek closer ties with the United States to reduce the risks posed by Chinese encirclement, which would further drive a wedge between the United States and Pakistan and draw Islamabad deeper into China’s orbit. This divide would be made greater still should President Trump, or any subsequent presidential administration, take additional action to alienate Pakistan and incentivize it to move closer to China for foreign support.

Security competition tends to incentivize great powers to form coalitions against their potential rivals, as evidenced by the creation of NATO and the Warsaw Pact during the Cold War. Should India pursue a more formal alliance with the United States, then the strengthening of Pakistan’s relationship with China could result in the Islamic Republic completely breaking with America in favor of a similar arrangement with the revisionist Chinese power. The formation of such alliances inherently heightens geopolitical tensions, but these particular coalitions could prove uniquely conflict-prone considering the states that compose them. Given the lengthy history of conflict between India and Pakistan over Kashmir, it is not difficult to imagine a fifth Indo-Pak war quickly escalating into a proxy conflict between the United States and China, resulting in four nuclear-armed nations at one another’s throats.

In the interest of avoiding such tensions, America should actively seek to salvage its relationship with Pakistan to improve the long-term prospects for stability and security in South Asia. Such an endeavor would require greater engagement by the United States with Pakistan’s civilian government, which has often been neglected in favor of developing strong ties with the Pakistani military. Additionally, Pakistan has, “one of the most robust civil societies in the developing world,” that has often been ignored by American policymaker, but, if properly engaged, could work hand-in-hand with the United States to promote local solutions to counterterrorism. A greater emphasis on public diplomacy and civil-society development, combined with a gradual reduction in American drone operations in Pakistan, could markedly improve America’s relationship with both the government and people of Pakistan.

Additionally, the United States must be conscious of the way it balances its relationships with both India and Pakistan. The Trump administration should heed Pakistan’s calls to increase its involvement in promoting a political settlement in Afghanistan, which would reduce Pakistan’s need to rely on China or the Haqqani network to exert political influence in Afghanistan. Furthermore, the United States should help facilitate dialogue between India and Pakistan over areas of potential economic and political cooperation in Afghanistan, since lessening Pakistan’s concerns about Indian influence in Kabul would minimize Pakistan’s incentive to continue providing support to the Taliban-affiliated groups in its tribal regions. Finally, closer ties between America and Pakistan improve America’s capacity to mediate disputes between Pakistan and India, reducing the likelihood that China’s rise will result in another conflict between them.

While America’s alliance with Pakistan has become increasingly plagued by mistrust in recent years, the prognosis for this relationship is not yet terminal, and the United States should make a concerted effort to heal this alliance while it still can. Pakistan developing closer ties with China is not a problem for the United States in a vacuum. However, the inverse trajectory of China and America’s relationships with Pakistan, combined with India’s complex role in the geopolitical aspirations of all three nations, could set the stage for an intense security rivalry in South Asia should Pakistan abandon the United States and place itself squarely in the camp of the Chinese. Despite having valid grievances regarding Pakistan’s inconsistent support for the War on Terror, it is in America’s best interest to pursue a diplomatic solution to these problems that preserves its alliance with Pakistan and reduces the likelihood of long-term conflict between the two countries.

Image: Supporters of Muhammad Tahirul Qadri, leader of Minhaj-ul-Quran movement wave flags on top of a bus during a protest march from Lahore to Islamabad January 13, 2013. A month ago, Muhammad Tahirul Qadri was living quietly in Canada, immersed in the affairs of his Islamic charity and seemingly far removed from the pre-election power games shaping the fate of politicians in his native Pakistan. In the past three weeks, he has returned home to lead a call for electoral reforms that has earned him instant celebrity, sent a stab of anxiety through the ruling class and raised fears of trouble at a planned rally in Islamabad on Monday. REUTERS/Mani Rana