America Cannot Keep Hoping the Military Will Solve Everything 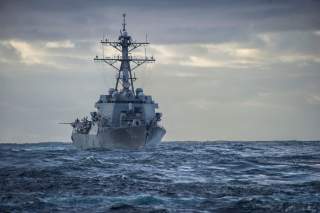 Whether its North Korea, Iran, or even Russia, there are far too many in Washington’s foreign policy establishment who advocate reliance on the military to solve any real or perceived international problems. This overreliance on military instruments poses a dangerous and counterintuitive problem—the more the United States uses it, the greater America’s insecurity.

Most Americans agreed that a military response was necessary to seek justice for 9/11. By mid-2002, however, the Taliban and al Qaeda were destroyed in Afghanistan.

At that point in time, President George W. Bush should have redeployed U.S. troops, refocused efforts to repair the breach in security exposed by 9/11, and set about building a stronger country. Instead, Washington doubled-down with actions that both extended and expanded American insecurity.

In 2003, the U.S. took what had been a strategic nuisance in Saddam Hussein's Iraq and after removing the strongman from power, turned it into a terrorist breeding ground (for there had been no international terror threat coming from Iraq before the regime change). In 2005, a handful of U.S. troops faced a small—but irritating—insurgency in Afghanistan and instead of closing out the mission, expanded it to include 140,000 U.S. and North Atlantic Treaty Organization troops. In more recent years, Washington has increased the use of lethal military power into places such as Syria, Libya, Yemen, Chad, Niger, and Somalia.

America has increasingly used both direct and veiled threats of military force to compel North Korea and Iran to bend to Washington’s will, and every Administration since 9/11 has used (or expanded) the scale of military exercises in Europe to counter Russia and in Asia to counter China.

This strategy has cost the blood of tens of thousands of American sons and daughters (6,971 killed; 52,682 wounded in action since 9/11, according to official Department of Defense casualty figures). How has this strategy protected U.S. national security interests?

If the answer is a reduced terror threat, more stable relations with Russia and China, and a strengthened U.S. military, it may well be argued the price was worth it. Instead, for this extraordinary charge in blood and treasure, America has purchased very nearly the opposite.

Had the United States left Saddam Hussein in his strategic box in 2003, Iraq would most likely still be contained. Had President Bush withdrawn the military in the summer of 2002 after successfully routing al Qaeda and the Taliban, America would not have spent the next seventeen years there in futile search for a victory.

Had America not joined in the attack against Libya in 2011, or the fight in Yemen, or expanded lethal military operations into a dozen states in Africa, those areas might have still descended into chaos, but they would have been purely local challenges that posed no threat to U.S. national security. To end this overreliance on military power and increase America’s chances to prosper as a nation, the United States must make several changes to its grand strategy.

First, Washington must recognize that American military power is not going to solve political, ethnic, or religious problems. Second, U.S. leaders must accept that America cannot solve every problem in the world—nor should it try.

For the past thirty years, China has been expanding its economy and modernizing its military, but still remains far behind matching U.S. power. Russia is a shell of the military power the Soviet Union was during the Cold War and with its economic, geographical, and demographic limitations, it will remain at most a regional menace. Both states are nuclear powers, but neither can challenge American conventional power and America's advanced nuclear deterrent constrains both.

America has blown out of all proportion the threat posed by North Korea and Iran. As the United States has successfully deterred Russia and China for seventy years, it can deter the tiny nuclear arsenal Pyongyang has and the strategically impotent conventional military both Iran and North Korea wield. In short, the actual threat to U.S. security posed by the totality of all potential adversaries is real, but nowhere near as pervasive and offensive as is routinely claimed.

The primary purpose of the U.S. government is to keep Americans safe, defend its borders from attack, and ensure its ability to prosper as a nation. Maintenance of a strong military is an important component in accomplishing those objectives, but it is not the only one.

True global leadership is led by sustained diplomatic and economic engagement. Through the effective give-and-take of hard-nosed diplomacy, the United States can find mutually beneficial trade relations with its allies around the world to foster continued prosperity for its country. Likewise, America can leverage those favorable relations and its own economic power to positively influence its competitors in ways that constrain behavior antithetical to U.S. interests while limiting the risk of retaliatory measures.

Due to America’s powerful nuclear deterrent, globally dominant conventional military, and its position as the world’s most powerful economic engine, America can indefinitely deter Russia, China, North Korea, Iran, or any hostile nation on earth from attacking U.S. soil or U.S. citizens.

Should deterrence and diplomacy fail to dissuade any bad actor around the globe from attempting to harm U.S. interests or citizens, the U.S. military will not hesitate to use whatever means necessary to properly defend the homeland. But even here it is critical to distinguish when military force should and shouldn't be applied.

Lethal military power should be used sparingly and only when American lives or property have been attacked (or are in imminent danger of being attacked). Failure by America to merely get its way is not a justifiable reason to kill others. Nor is attacking others justified because of what might happen in the future.

Adopting such a guiding philosophy is not only moral and right—it is also the best path to a consistently successful outcome at the strategic level.

Image: The US Navy Arleigh Burke-class guided-missile destroyer USS Roosevelt steams in the Atlantic while en route to the Mediterranean Sea February 18, 2014. U.S. Navy SEALs operating from the USS Roosevelt have seized a tanker that fled with a cargo of oil from a Libyan port, the U.S. Department of Defense said on March 17, 2014, halting an attempt by rebels to sell petroleum on the global market. Picture taken February 18, 2014. REUTERS/Mass Communication Specialist 3rd Class Scott Barnes/US Navy/handout via Reuters (GIBRALTAR - Tags: POLITICS ENERGY) ATTENTION EDITORS - THIS IMAGE WAS PROVIDED BY A THIRD PARTY. FOR EDITORIAL USE ONLY. NOT FOR SALE FOR MARKETING OR ADVERTISING CAMPAIGNS. THIS PICTURE IS DISTRIBUTED EXACTLY AS RECEIVED BY REUTERS, AS A SERVICE TO CLIENTS