America Cannot Save Ukraine: Why MH17 Changes Nothing 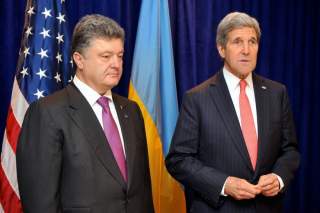 The agony of the families of the 298 people who died on flight MH17 lives on. Unfortunately, however, even a thorough crash investigation might not solve the mystery as to who shot down the plane.

The downing of the Malaysian airliner created shock and calls for stronger action against Russia and its separatist clients in Ukraine. But the tragic shootdown, though an atrocity, changes nothing in practice. Indeed, the United States has little credibility in complaining about foreign interference or errant attacks on civilians.

American intelligence reportedly concluded that Russian separatists mistook the flight for a Ukrainian military plane, which seems most likely. By their own claims, they had Buk missiles, whether captured from Ukraine or provided by Russia. Moreover, they claimed to have downed a Ukrainian transport plane and had been shooting down Ukrainian planes with some regularity. But the rebels would gain no advantage from intentionally downing a foreign airliner.

Nevertheless, likely isn’t certain. In 2001, the Ukrainian military inadvertently downed a Russian airliner when an antiaircraft missile fired as part of an exercise missed the target drone. Still, the Ukrainian military had no cause to be firing antiaircraft missiles, since the separatists possess no air force. Kiev would gain from pinning a civilian shootdown on the insurgents. However, exposure of a Ukrainian “false flag” operation would have devastating consequences, and likely would deter serious consideration of such a course.

So, absent contrary evidence, policy makers should assume that the separatists did it, perhaps with missiles supplied from Russia. If so, then what to do?

Almost immediately after the incident in Ukraine, America’s hawks began stoking the war machine. Sen. John McCain said involvement of Russia or Russian separatists in the plane’s shootdown “would open the gates for us assisting, finally, giving the Ukrainians some defensive weapons [and] sanctions that would be imposed as a result of that. That would be the beginning.” Given the Senator’s propensity for calling for war, who knows what the end would be.

The better answer, however, remains to do largely nothing. The MH17 incident, while outrageous, actually is no trigger for anything. Errant attacks on civilians, while always tragic, are not unusual.

There were several mistaken downings of civilian airliners in World War II. The People’s Republic of China shot down a Hong Kong airliner in 1954, killing ten. A year later, Bulgaria downed an El Al flight that mistakenly flew into that nation’s airspace. Fifty-eight died. In 1973, Israel shot down a Libyan airliner, killing 108 people, in similar circumstances. Five years later, the Soviet Union forced down a South Korean flight; two people died in the emergency landing. In 1980, an Italian flight apparently was downed by a warplane suspected to be French but never officially identified, killing eighty-one passengers and crew. Three years later, the Soviet Union shot down a Korean Airlines flight, mistaking it for a U.S. spy plane, killing all 269 on board, including a U.S. congressman.

However, in none of these cases was an accidental or erroneous shootdown sufficient for a casus belli. Not once did much of anything happen. Governments and guerrillas routinely dissembled. Their adversaries used the tragedies for propaganda purposes. Sometimes compensation was paid. But no retaliatory strikes were launched. No wars were fought. No governments abandoned military action, no insurgents retreated. Life pretty much went on as before, except for the victims and their loved ones.

Even during the Cold War, such incidents were resolved peacefully. While Ronald Reagan used the Korean Air incident against the Soviet Union, he did not move beyond diplomacy. And imagine the U.S. reaction had other nations joined Iran in taking military measures and imposing sanctions against America for blasting the latter’s airliner out of the sky.

In the case of MH17, national and international civil-air authorities should do better in adjusting air-travel routes to combat realities on the ground. Some 400 commercial flights, including about 150 international ones, usually travel across eastern Ukraine daily. The United States and the Europeans also might indicate that another such incident, if tied to Moscow, would result in the grounding of Russian aviation internationally.

Beyond that, however, the United States has no more cause than before for extensive involvement in the Ukraine imbroglio. Of course, Moscow’s geopolitical machinations are to be deplored. However, Russia is no Soviet Union, and Vladimir Putin is no Joseph Stalin. Unlike the U.S.S.R., Russia represents no ideological threat and controls no military alliance. Moscow’s armed forces do not have global reach. Russia meddles internationally, but it is a mere dabbler compared to the Soviet Union, which collected allies and client states around the globe and subverted states and promoted tyranny in Africa, Asia, and Latin America.

In fact, Putin’s Russia appears to have reverted to a traditional great power, concerned about international respect and border security. Its ambitions are fierce, but bounded. Moscow’s intervention in Ukraine, like the former’s war against Georgia, is consistent if unfortunate. But such action isn’t likely to lead to much further. Indeed, it appears that Moscow has no interest in swallowing Ukraine, with a majority of non-Russians (in contrast to Crimea), just like it did not absorb Georgia. The likelihood of aggression further west is even less likely.

President Barack Obama correctly dismissed the threat posed by Moscow: “Russia is a regional power that is threatening some of its immediate neighbors, not out of strength but out of weakness.” Moscow’s possession of a significant nuclear deterrent poses a threat only to Washington’s ability to act against Russia, since there is no evidence that Vladimir Putin or any of those around him is suicidal.

The situation facing Ukraine is tragic, but not one of strategic significance to America. The United States never viewed Kiev’s independence as important, let alone vital, when facing the Russian Empire or the Soviet Union. Kiev’s situation is even less so today, since Moscow does not pose the kind of threat that it did during the Cold War. Washington has no security reason to confront Russia militarily, or to risk escalation to military action, over Moscow’s treatment of Ukraine.

The Ukrainians deserve sympathy, of course. Moreover, Washington’s desire to constrain Russian misbehavior warrants diplomatic as well as economic pressure. However, such efforts should be restorative, rather than punitive, and so far there is no evidence that Moscow is prepared to retreat. It would be a mistake to rupture relations with a country that could do much to impede or advance more substantial American objectives elsewhere—Iran, Afghanistan, Iraq, Syria, North Korea and more.

More broadly, it is time for Europe to take over responsibility for its own defense. Russia’s economic and military strength is dwarfed by not only that of America but also Europe, which possesses an economy eight times the size of Russia’s and a population three times as great. Moscow is capable of beating up on its weaker neighbors, such as Georgia and Ukraine, but not conquering Europe, the traditional fear during the Cold War. The Ukraine crisis is primarily a problem for Brussels, not Washington.

The conflict in Ukraine is a human tragedy. Russia is primarily to blame, but Ukraine and the West are not free of fault in triggering the imbroglio. Most important, the United States has little cause for leading an international campaign against Moscow. Instead, let Europe take the lead in putting its security and prosperity on the line.

Doug Bandow is a Senior Fellow at the Cato Institute and a former Special Assistant to Ronald Reagan. He is the author of Foreign Follies: America’s New Global Empire (Xulon).