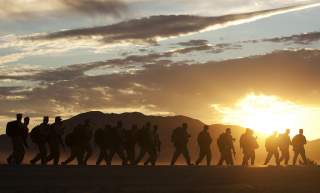 Trump should refuse to grant the request of Gen. Joseph Votel, head of U.S. Central Command, for thousands of additional troops to be sent to Afghanistan. Indeed, Trump should announce that, true to his campaign promise, he will not continue the failed Bush-Obama policy of nation-building in Afghanistan. The president should state that the United States will give the Afghan government six months to work out a deal with the Taliban, but then withdraw U.S. troops—advisers and all—and rapidly scale back the billions of dollars the United States provides to the corrupt government. He should warn the Taliban—who are sure to play a major role in the future of Afghanistan—that if it again hosts terrorists who seek to harm the United States, then the United States will respond with heavy bombings. Also, he should notify U.S. allies, who have troops in Afghanistan and who help train and finance the Afghan government, that if they are willing to take over the futile attempt to turn Afghanistan into a stable government, maybe even a liberal democracy, then they are welcome to try. Otherwise, they may wish to phase out assistance as the United States does.

One notes that General Votel did better than his long line of predecessors in Vietnam, Iraq and in Afghanistan—who time and again asked for more troops—by at least not promising that if his request was granted, then the United States would win the war. He only holds that his request would “make the advise-and-assist mission more effective.” And Gen. John Nicholson, who is the commander of U.S. forces in Afghanistan, said in early March that he needs several thousand more troops to break the “stalemate.” To win, some previous U.S. military analysts held, the United States will have to stay for long periods. Former U.S. military leader, Dr. John Nagl, said in 2015 that “If ground is important enough to spill American blood on it, and in quantity, it is important enough to continue to station American forces on that ground for decades in order to prevent that threat to US interests from arising again.” This ignores the principle of sunk costs. Sadly, the losses we have already suffered and inflicted cannot be reversed, but it defies logic that if we have made a bad investment we must continue to do so.

What one hopes Trump advisers will note is that the war in Afghanistan was won a long time ago and easily. Only twelve U.S. soldiers died during the 2001 overthrow of the Taliban in Afghanistan, where the fighting was largely carried out by locals of the Northern Alliance. The Department of Defense spent only $39.8 billion in Afghanistan in 2001 and 2002, while the total cost of security-related aid in 2002–03 was only $535 million. Killing off most of Al Qaeda was also not a difficult undertaking. What has caused the greatest loss of lives (including that of many locals) and squandering of scores of billions of dollars was the attempt to stay and “rebuild” Afghanistan into a modern state and ally.

The only previous U.S. successes in long-distance nation-building were in Japan and Germany, which had very different sociological conditions than Afghanistan. The special conditions in Japan and Germany included the cessation of all hostilities, a high level of domestic security, and local acceptance of the foreign occupation and democratization project. In addition, these nations had a strong sense of national unity, competent government personnel and low levels of corruption. Furthermore, they enjoyed strong economic fundamentals, including solid industrial bases, established infrastructure and educated populations. Also, there was vigorous support in these nations for science and technology, corporations, business and commerce.

But none of these conditions are in place in this godforsaken twelfth-century country to repeat what we did in Germany and Japan after World War II. Afghanistan's military and police forces are riddled with corruption and ineptitude, and Afghanistan is by far the world's largest producer of opium, according to the United Nations Office on Drugs and Crime.

Supporters of continued U.S. involvement argue that Afghanistan will turn into a breeding ground and haven for terrorists if the United States leaves; and if we do not fight them there, then we will have to fight them here. In a recent op-ed, Republican Senators John McCain and Lindsey Graham wrote that “The U.S. objective in Afghanistan is the same now as it was in 2001: to prevent terrorists from using the country’s territory to attack our homeland.” However, first, terrorism already has so many places to breed—in Libya, Syria, Iraq, parts of Pakistan and half a dozen African countries—that they hardly need one more. So far, there is little evidence that they are able to hit the United States ever since the United States put up its guard after 9/11. Most relevant, the 9/11 terrorists were not Afghans or Taliban, but Saudis and other foreigners that the Taliban reluctantly hosted. There is little reason for them to tolerate them again after the suffering they underwent for the last fifteen years.

Others argue that the United States leaving Afghanistan would upset India because it would allow Pakistan—India’s archrival in the region—to increase its influence. However, that is hardly a reason to keep sacrificing lives and scarce resources on a war that has no end in sight. As a candidate, Trump suggested that the United States shouldn’t pull out its troops because Pakistan has nuclear weapons. However, these troops would be much better placed off shore, on ships. Others suggest that U.S. troops should stay, if nothing else, to protect the U.S. embassy. But if any embassy really is under such continual assault that it requires such a large troop presence, then it would be better to evacuate embassy than keep thousands of Americans mired in Afghanistan.

Trump is, by instinct, a domestic president and much occupied with replacing Obamacare, banning immigration, building infrastructure, budgets and much else. However, he should not let the generals allow his administration to be mired in the same quicksand that sucked in two previous American administrations over the last sixteen years.

Amitai Etzioni is a University Professor and Professor of International Relations at George Washington University, which recently published his position paper, “The China Options.”