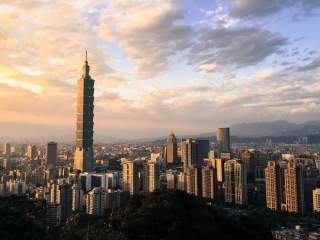 President Bill Clinton set off a political firestorm in Taiwan and the United States [in 1998] when he chose to state what are known as the "three no's" as official U.S. policy toward Taiwan. . . .The words President Clinton chose to use in Shanghai—words used by no previous President—have put the people of Taiwan at a severe disadvantage in their 50-year struggle with the communist government of mainland China.

This is a delicate and dangerous time for Taiwan—perhaps the most difficult period since the cross-strait crisis in 1995-96 that saw live fire exercises by Beijing, juxtaposed with a “shock and awe” display of American sea power.

This is a delicate time because Taiwan has a new president, Tsai Ing-wen, leading a political party that seeks to distance itself from the mainland and any “One China, Two Systems” policy. Tsai is being carried along by a wave of Taiwanese nationalism that itself is being propelled by a combination of economic stagnation on the island, and the spectacle of a “One China, Two Systems” Hong Kong being ground under Beijing’s authoritarian boot.

This is a dangerous time because a bullying Xi Jinping has responded in the worst possible way to Taiwan’s peaceful transition of presidential power—with a cut-off of diplomatic ties, punishing sanctions on trade and tourism and a steady drumbeat of hostile propaganda. The mood on the island, which I just returned from after extensive talks with government officials, business executives, academics and people on the street, is one of quiet resolve. While there is no wish to provoke Beijing, there is even less desire to bend to its authoritarian will.

6,700 miles away on the U.S. mainland, it is critical there be no missteps in American policy towards Taiwan that might, on the one hand, inflame China or, on the other hand, throw Taiwan—once again—under Beijing’s bus. The inalterable fact here is that American foreign policy towards Taiwan since its formation as a political entity in 1949 has been highly uncertain.

On the one hand, Taiwan has periodically been used by the White House merely as a “bargaining chip” in a game of amoral realpolitik and “realeconomik” to woo and placate mainland China. The key offending presidents here include Richard Nixon, Jimmy Carter, Bill Clinton, George W. Bush and Barack Obama; and some of the key “bargaining chip” documents include both the “three communiqués” and some ill-timed and poorly worded proclamations by Clinton—arguably the biggest sell-out to the People’s Republic of China of any American president in history.

For example, the first “Shanghai Communiqué,” signed February 28, 1972 sealed the Nixon–Kissinger deal to play an “enemy-of-my-enemy-is-my-friend” China off the Soviet Union. While the communiqué itself did not completely surrender Taiwan to China, it was part of an overall set of initiatives that had begun with Taiwan being ousted from the United Nations and replaced by Beijing in 1971 with little push back from the United States. This was the end of Taiwan as a nation recognized internationally, and the beginning of what has been a long period of increasing isolation.

In a similar vein, President Carter’s 1979 “Joint Communiqué on the Establishment of Diplomatic Relations” showcased this neutering trifecta: the end of America’s official diplomatic recognition of Taiwan as a nation, the withdrawal of troops from Taiwan soil, and the severing of America’s mutual defense treaty with the island.

As for Bill Clinton, his was a mixed, and ultimately shameful, bag. While he finally sent aircraft carrier strike groups into the Taiwan Strait during the 1995-1996 crisis at the urging of Congress, he had denied the president of Taiwan a visa in 1994.

Most injuriously for an increasingly isolated Taiwan seeking to participate in the international order, Clinton also publicly renounced any support for Taiwan independence in publicly embracing Beijing’s “Three Nos” policy in 1998. In doing so, a “throw-Taiwan-under-the-bus” Clinton stated: “we don't believe that Taiwan should be a member in any organization for which statehood is a requirement." Said Jim Mann in response to steps even Nixon and Carter wouldn’t take:

When it comes to misleading the American public, it's hard to top the Clinton administration…. Last week, during his stopover in Shanghai, Clinton made what was the most important presidential pronouncement on American policy toward Taiwan in more than 15 years. He gave the imprimatur of the presidency to what are sometimes called, in shorthand, the "3 no's." He said the United States will not support independence for Taiwan; any solution that creates "two Chinas"—or one China and one Taiwan; or its admission to organizations, such as the United Nations.

Of course, two years later, Clinton would heavily lobby to shoehorn China into the World Trade Organization—a move that resulted in a flood of illegally subsidized Chinese products, the closure of over fifty thousand American factories, stagnant wages and a good bit of the economic mess this country is now in.

As counterpoint to the presidential selling out of Taiwan by Nixon, Carter, Clinton et. al., the island democracy has also been periodically been treated with the kind of dignity and respect it deserves as a beacon of democracy and key strategic ally in Asia. This Janus face of American policy is reflected most completely in two key policy documents.

First, there is the 1979 Taiwan Relations Act (TRA)—passed by an angry Congress in strong and stinging rebuke to Jimmy Carter’s Second Communiqué. Of the six main policy points stated in the document, one of the most important is the clear statement that “the future of Taiwan will be determined by peaceful means.”

Importantly here, the TRA not only indirectly commits the United States to a defense of Taiwan if Beijing uses kinetic force. The TRA also recognizes “three warfare” tactics like the tourist boycotts and trade embargoes that Beijing is currently inflicting on Taiwan as weapons that constitute “other than peaceful means,” that may justify U.S. intervention.

In addition, the TRA guarantees continued “arms of a defensive character” to Taiwan—although the White House (most recently both Bush and Obama) often tries to skirt this commitment by denying the sale of some of America’s more advanced weapons to Taiwan.

As for the second key document guiding U.S. policy, these are the “Six Assurances” from the desk of the only president since the 1960s who truly understood the concept of peace through strength, Ronald Reagan. The most important of these assurances include that the United States will not “formally recognize Chinese sovereignty over Taiwan,” “pressure Taiwan into negotiations with China,” or “consult with China in advance before making decisions about U.S. arms sales to Taiwan.”

Here again, however, kowtowing presidents have often violated these assurances, e.g., Clinton’s undercutting of Taiwan on the sovereignty issue, Obama’s kowtowing signaling behavior to Beijing on the arms sales issue.

Where Do We Now Stand?

With the above observations as background, let me know reflect on what is likely to be the best direction for U.S. policy at this critical juncture and some critical “do’s and “don’t’s.”

On the “don’ts” front, the guiding principle here is that there is no need to unnecessarily poke the Panda. Ergo, American leaders should never refer to Taiwan as a “nation” or “country”—even as they should recognize it as a “democracy” and “political entity,” thereby signaling Taiwan’s de facto, if not de jure, independence. Here, words matter very much indeed—far more to Beijing, and far more in Asia, than American political sensibilities often grasp.

Second, American leaders should never acknowledge the “One China, Two Systems” policy—nor even refer to the “One China” policy again. Here, if one carefully reads documents like the Shanghai Communiqué, there is really no acknowledgement of a “One China,” but rather (and only) the far more subtle acknowledgement that both China and Taiwan agree there is only one China—while having significant disagreements about what that “One China” constitutes.

As noted in the Communiqué: “The United States acknowledges that all Chinese on either side of the Taiwan Strait maintain there is but one China and that Taiwan is a part of China.” Here, again, words matter deeply—which is why Clinton’s behavior in embracing the “Three Nos,” in particular, was so egregious.

Third, it is critical that both Congress and especially the White House stop publicly acknowledging the need to appease China in the consideration of any arm sales to Taiwan. This is not only a violation of Reagan’s Six Assurances. It also demonstrates weakness on the part of America on the Taiwan question even as it undercuts Taiwan.

Some Do’s and Don’t’s

On the “do’s” front, the guiding principle is to continually assure Taiwan and the world of America’s commitment to both the Taiwan Relations Act and Reagan’s Six Assurances. That both the House and Senate recently reaffirmed the TRA by unanimous votes was, for example, extremely welcomed by Taiwan’s leaders at this critical juncture. A similar statement by the White House and the major presidential candidates would likewise be both welcomed and prudent at this time of heightened tensions.