Is America Creating a Diplomatic Crisis Over the Iran Deal? 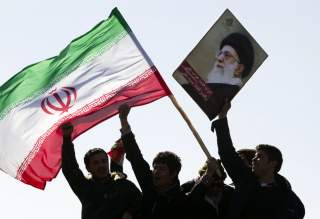 Though Congress did not overturn the nuclear deal that the Obama administration and five other countries negotiated with Iran, known as the Joint Comprehensive Plan of Action (JCPOA), it required the president to certify Iran’s compliance every ninety days.

Despite a campaign commitment to tear in half his predecessor’s hallmark achievement, President Trump has yet to forfeit the deal. Indeed, the president certified Iran’s compliance in July. After doing so reluctantly, he suggested that he would attempt to exit the deal at his next opportunity.

Last week, U.S. ambassador to the United Nations Nikki Haley addressed the issue at the American Enterprise Institute. Haley asserted that a decision to declare Iran noncompliant “has ground to stand on,” even if international inspectors certify Iran’s compliance, but that “does not mean the United States is withdrawing from the JCPOA.” Suppose the United States does withdraw?

What does a post-deal world look like? It would be a world in which American diplomacy would suffer and the transatlantic relationship would be further strained. Iran would likely resume its pursuit of a nuclear weapon. Also, preventive strikes against Iran would increasingly become necessary and war more likely.

The JCPOA is not an Iranian-American accord; it is a multilateral one. The United States and Iran negotiated the deal in coordination the European Union High Representative and the permanent five members of the United Nations Security Council, plus Germany (P5+1). A U.S. exit would endanger future diplomatic efforts with U.S. allies and adversaries.

Diplomacy requires a degree of trust, however minimal, that only regular interaction can produce. If the United States exits the deal, then it will affirm Iran’s mistrust, and dampen—if not eliminate—Iran’s interest in future negotiation. This adds a point to realism’s scoreboard at the expense of international security. By forgoing a diplomatic approach, the United States will limit its available tools to arrest Iran’s nuclear program. Moreover, a U.S. exit would further divide transatlantic relations.

The United States might be tempted to declare Iran in violation of the agreement, but the Europeans share no such temptation. Former U.S. ambassador John Bolton recommends an intense diplomatic campaign to court U.S. allies if the president abrogates the deal. However, this is unlikely to mend the damage caused by a U.S. withdrawal. In addition to the U.S. State Department and intelligence community, European capitals have affirmed Iran’s compliance. As the French ambassador noted after Haley’s address, “The Iran deal is about the nuclear issue, nothing else. So far Iran is abiding by the commitments taken in this mutually agreed framework.”

Europe is more inclined toward economic arrangements with Iran, and therefore less inclined to reinstate sanctions, let alone military confrontation. A U.S. withdrawal that falsely alleges Iranian violation would cede the diplomatic high ground. The global community, including U.S. allies, might perceive the United States in bad faith, not Iran. In the future, this would further inhibit the ability of the United States to build diplomatic coalitions and apply coercive measures to Iran. At the extreme, the United States may need to go it alone in a conventional conflict.

Most U.S. allies in Europe had precious little interest in the Iraq war. They would have less in an Iran war. This means the United States could bear the full burden of war fighting. After over a decade of costly operations in the Middle East and executing a military rebalance to the Asia-Pacific region, the U.S. military and public is war-weary. Moreover, European support for current operations might wane. These partners also fight alongside the United States in the Resolute Support mission in Afghanistan and the coalition to defeat the Islamic State.

Russia and China would not be likely to support war either, as they did during Operation Desert Storm in 1991. Both countries have shielded Iran from sanctions punishment. Iran is Russia’s closest ally in the region, a partner in backing Syria’s Assad and combating Islamist militancy. The Russo-Iranian tandem is also critical in undermining U.S. power projection in region. China does not share this interest. But it finds a strategic interest in securing energy resources in the Persian Gulf. Indeed, China is the globe’s largest oil importer from the Gulf, at 26 percent of its national consumption in 2011. A conflict with Iran could compromise these resources, which is an intolerable strategic risk for China.

If the United States exits the deal, then Iran is more likely, as President Rouhani has noted, to restart its nuclear program and pursue the bomb. The breakdown of JCPOA would affirm Iran’s self-perception of insecurity and mistrust of U.S. intentions. In this condition, a deterrent capability becomes more attractive. No concert of diplomatic, economic and kinetic tools can eliminate this basic reality.

Independent of nuclear acquisition, Iran may bolster its asymmetric tools to fuel low-intensity conflict in the region. For example, Iran could enhance its proxy capabilities in Lebanon. It could also weaken U.S. efforts in the region by upgrading its support for militants fighting the United States and deny the U.S. battlespace supremacy. A frightened state is more likely to provoke, harass and gamble—as North Korea demonstrates.

Of course, Iran may pursue nuclear acquisition covertly. This may be easier if Iran limits access to international inspectors. This could avoid snapback sanctions from the other P5+1 nations and strained relations with European and global capitals. It could also isolate the United States in the diplomatic arena because Iran would nominally remain in good faith. The problem of verification and enforcement exists under the JCPOA regime. To withdraw from the latter aggravates the former.

Nuclear realities present Iran’s adversaries a limited window of opportunity. They understand that Iran would be likely to weaponize in a post-deal world. This could produce powerful incentives for a preventive strike against Iran. A strike may be tactically successful, as Israel’s 1981 attack of Iraq’s Osirak reactor demonstrated. But it would present two principal strategic problems.

First, Iranian retaliation runs the risk of horizontal and vertical escalation. Iran may target U.S. allies in the region and draw the United States into direct military confrontation. The consequence may include intensified military exchange that approaches conventional war fighting. Second, a strike may delay Iran’s pursuit of the bomb, but it likely cements Iran’s determination to acquire it. In the other words, the Iranian end state may remain nuclear.

If there is such thing as a perfect deal, the JPCOA is not it. As many did during arms control negotiations with the Soviet Union, opponents of the Iran deal raised legitimate concerns involving verification, access and sunset clauses that expire in less than ten years time. But the enemy of the good is the perfect. To be sure, even some of the deal’s skeptics should recognize the danger of abrogating it. Indeed, tensions on the Korean Peninsula magnify this danger, because the United States could face (nuclear) crises in two regions of vital interest.

The policy implication is clear. President Trump and Ambassador Haley: if you worry about the bomb, learn to love the deal.

Lawrence J. Korb is senior fellow at the Center for American Progress and was the Assistant Secretary of Defense for Manpower, Reserve Affairs, Installations and Logistics from 1981–1985.

Image: Demonstrators wave Iran's flag and hold up a picture of supreme leader Ayatollah Ali Khamenei during a ceremony to mark the 33rd anniversary of the Islamic Revolution, in Tehran's Azadi square February 11, 2012. Iran's President Mahmoud Ahmadinejad said on the anniversary of the revolution that the Islamic Republic would soon announce "very important" achievements in the nuclear field, state TV reported. REUTERS/Raheb Homavandi