America Did Not Cause Afghanistan’s Collapse 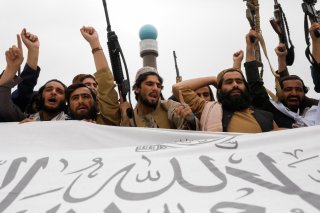 The Afghans who benefitted from U.S. presence in Afghanistan have been bashing Zalmay Khalilzad, the former U.S. Special Envoy for Afghanistan Reconciliation, ever since he signed the Doha Agreement with the Taliban on February 29, 2020, which paved the way for the American withdrawal from Afghanistan. The government of President Ashraf Ghani collapsed less than eighteen months after the signing of the agreement and the Afghans accuse Khalilzad—acting on behalf of the U.S. government—of betraying the former Afghan government (or the Republic, as some call it), and facilitating the Taliban’s return to power. Had the United States not signed the Doha Agreement, the argument goes, the Ghani government would still be in power today.

But the rage directed toward the United States for the Taliban’s return to power is unjustified, albeit understandable, given how a small segment of the Afghan population—mainly based in Kabul—benefitted from the American presence. Many of the Kabul-based, pro-U.S. Afghans who enabled the U.S. presence in Afghanistan—such as former warlords and government officials, and Afghans with dual citizenship or work experience with foreigners—have already been evacuated from the country. It is mostly these above-named Afghans that are trying to shape the narrative that the United States in general and Khalilzad, in particular, are responsible for the Taliban’s swift comeback to power.

There is no denying the fact that Afghanistan’s overall economic condition has worsened under the Taliban, who have learned little from their hardline approach of the 1990s. At present, Afghanistan is under pressure from U.S. financial sanctions, and its banks are cut off from the international financial system. Additionally, the Taliban—contradicting their own prior assurances —have begun imposing strict restrictions on girls and women across Afghanistan. For instance, girls are banned from public secondary education in most provinces, and female TV presenters are required to cover their faces on air.

No sensible Afghan is happy about the Taliban’s rigid interpretation of Islam and the extent of restrictions they are imposing on Afghan girls and women. These girls and women themselves have voiced their opposition to restrictions by consistently taking to the streets of Kabul to protest the Taliban. Similarly, religious scholars and tribal leaders from across Afghanistan have also called on the Taliban to allow girls to get a secondary education.

That said, the collapse of the Ghani government was a gradual process, with both internal and external factors at play and not just an event that the United States suddenly precipitated in August 2021. The process of collapse started the day that the United States invaded Afghanistan and brought corrupt and notorious warlords, as well as incompetent and dishonest Afghans living in the West, back to power.  Those who followed the turn of events in Afghanistan knew from the outset that the American project in Afghanistan would fail. It was only a question of how long it would take.

With regard to the internal factors of the collapse, from day one there was little commitment and honesty from the Afghan side. The United States had no reliable allies or partners in Afghanistan. Both the warlords and so-called liberals who had returned from the West worked to further their own personal and family interests. For instance, right after the Taliban’s collapse in 2001, instead of agreeing on a constitutional framework to devolve power from Kabul to local governments, to ensure civic participation at the grassroots level, the warlords agreed—on paper—to a strong central government in Kabul in exchange for ministerial portfolios in the cabinet or governorships. Later, in the mid-to-late 2000s, when former president Hamid Karzai consolidated his hold on power, he fired many of the warlords that he had previously relied on.

Moreover, the government in Kabul was handicapped by corruption, nepotism, and short-sightedness. The rulers in Kabul—confined to their mini fortresses and armored vehicles—had lost contact with ordinary people in the villages where the majority of Afghans lived. Officials in Kabul tried to address these problems in two ways. First, by asking the United States for more money. And second, by blaming neighboring countries for the chaos in Afghanistan. Neighbor-bashing, especially directed toward Pakistan, has been a go-to tool for Afghan officials looking to divert attention from their own incompetence and harness domestic support, for decades

In terms of external factors, the United States either knew little about Afghanistan or deliberately chose to ignore the ethnic, tribal, and linguistic sensitives there. In a divided country with many fault lines, the United States partnered with one party—the anti-Taliban Northern Alliance—whose commanders pursued their own personal and family interests in the civil war to topple the other, namely the Taliban. To add insult to injury, the United States also torpedoed the Taliban’s nascent desire to lay down their arms in exchange for a safe and honorable exit from the political and military scene.

Additionally, most projects—both civilian and military—that the United States and its associated contractors undertook were either short-term (like building schools with low-quality construction material and few teachers) or lacked tangible results (like the Afghan National Army (ANA) fiasco. The ANA, from its inception to its demise, relied on continued U.S. support for fuel, ammunition, spare parts, and salaries. The ANA’s only achievement was producing several hundred obese generals, who in turn indulged in moral and financial corruption at every level.

Yes, the United States bears responsibility in the sense that it set up a dysfunctional and corrupt government, which was destined to fail from the outset, and sustained it with questionable means and practices for twenty years. But to say that the United States directly handed over power to the Taliban and that the Taliban themselves did not fight to recapture Afghanistan is a gross misreading of the entire fiasco and yet another indication that Afghans have done little introspection.

Both internally and externally, all the ingredients were in place for a full-blown disaster in Afghanistan. In such a situation, where the United States. only had bad and worse options, a complete withdrawal was the lesser of the two evils. Continued U.S. presence beyond 2021 would neither have brought peace to Afghanistan nor weakened the Taliban militarily. It would have been doing the same thing repeatedly and expecting a different result.

With or without the Doha Agreement, the Ghani government was well on track to collapse as soon as the United States left. Similarly, there was no military opposition that could have prevented the Taliban from recapturing Afghanistan by force of arms. The other set of allegations, that Ghani, in collusion with the United States, let the Taliban take over Afghanistan is as baseless as blaming the United States for handing over Afghanistan to the Taliban. If the Taliban got Afghanistan as a result of a U.S.-Ghani conspiracy, and not their own military might, then it should not be hard for the Taliban’s armed opponents—such as the so-called National Resistance Front (NRF)—to dislodge them from power easily, since the Taliban lack military strength to hold onto power. The NRF, however, has failed to even capture and hold a single provincial district.

That said, today Afghanistan is not in an ideal position either. Especially for girls and women, who have goals and want to excel in life, Afghanistan has become an open-air prison. Many young Afghan girls, whom the Taliban have deprived of going to school and imposed restrictions on for work purposes, might be suffering from depression. Afghans themselves, more than anyone else, are to blame for the current sad state of affairs. It was we Afghans who were not honest with Afghanistan and wanted a foreign, invading power to fix and rebuild it.