America Does Not Need a Draft 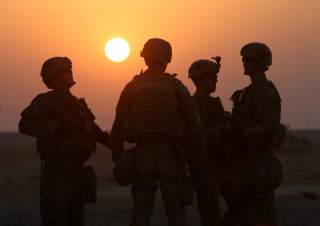 Nick De Gregorio, a veteran of our nation's current wars, recently wrote an article for The National Interest in which he argued for the return to a military draft as a way to not only help the military but also to involve our nation's citizens in service to their country. He is not alone in this thinking. Many outstanding citizens of our country argue for a draft. General (retired) Stanley McChrystal, my classmate from West Point, is one proponent.

But this sincere interest in helping our military and instilling a sense of service to our country by reinstating the draft is wrongheaded. We don't need a draft to “spread the pain” (or privilege) of military service among various social and economic groups, and it would end up costing the military way more in money, means and morale than we can afford. Using De Gregorio's earnest piece, which lays out the most common arguments for a draft, we can examine whether those arguments hold up to scrutiny.

Up front it is important to note that our nation still requires young men to register for "selective service" (draft), and Congress, with the president, can reinstate a draft if a conflict were so big as to require a major increase in the military. What De Gregorio and others are recommending though is a “peace time” draft.

“Through the 1973 War Powers Resolution (WPR), the United States committed to never again enable the president to prosecute lengthy wars without the express consent of Congress.”

De Gregorio claimed in his article that the All Volunteer Force was initiated along with the 1973 War Powers Resolution (WPR) to prevent us from entering a long war with no public support. That's true of the 1973 WPR, but in fact, the AVF had been under consideration since the 1960s, well before the WPR, and its adoption was driven mostly by a desire to find a more economic and effective model for manning the military.

According to the Oxford Companion to American Military History 2000:

“The blueprint for the AVF was prepared by President Richard M. Nixon's Commission on an All Volunteer Armed Force, appointed in 1969. Driven by political pressure to end the draft and an ideological commitment to free market forces, the commission headed by Thomas Gates concluded that a volunteer force, supported by the potential to reintroduce the draft, was preferable to a mixed force of conscripts and volunteers, and that, based on labor market dynamics, it was economically feasible to raise a volunteer army.”

De Gregorio, to his credit, acknowledges the economic arguments in favor of AVF “were valid” but, he focuses on the AVF as the tool for relief from lengthy, unpopular wars.

So many changes were happening in the early 1970s that it is understandable to mistakenly conflate them. Two of those changes are cited by De Gregorio: the War Powers Resolution and the All Volunteer Force. But in fact, the way in which defense planners attempted to prevent long, unpopular wars was not by replacing the draft with a volunteer system but by moving key combat and support functions from the Active component into the Reserves and National Guard. Congress then added the requirement that any lengthy mobilization of these reserves would require the president to get congressional approval. The thinking was that any major war would require the call up of military forces, draft or volunteer, which would in turn involve military members from all the states, not just those with large bases.

In his 2012 Foreign Policy article, General Stanley McChrystal also argued for a draft, writing, “I think if a nation goes to war, every town, every city needs to be at risk. You make that decision and everybody has skin in the game.” This in fact happened in both Desert Storm (1991) and the wars in Iraq and Afghanistan, because of the 1970s decision to shift forces into the Reserves. For the current wars, which have dragged on for almost two decades, forces from across America in the Reserves and National Guard were needed at such high rates that the Army had to extend troops in the war zones and break dwell time rules back home to meet demand. A visit to any small town in America today will almost certainly reveal a monument or memorial to those from that area who served in the current and recent wars. A draft is not necessary to bring the pain of war to small town America.

“A civilian-military disconnect looms over our society.”

This is one of the most common complaints about the All Volunteer Force. Preventing or mitigating such a divide has been a concern of the uniformed military since the AVF was instituted in the 1970s, and as a result, leaders have made a concerted effort to reach out to the civilian population. Military units conduct “Open House” days for local populations. They link themselves with local schools and communities by providing support to local events. They form joint community advisory boards to deconflict military base operations and local governments.

Although many civilian and military experts often cite this "divide," there is no real proof of its existence. Neither is there real proof of its negative impact. Simply pointing to the smaller number of troops in the military compared to the Cold War and WWII, does not prove that a divide exists between those “proud and few” and the general population.

De Gregorio claimed, “To many, the military are a class of strangers; nameless, faceless beings to whom Americans have no personal attachment. They are an expendable commodity.” I suggest that this sentiment more accurately describes the divide between our civilian population and our uniformed military in the 1960s when there was a draft than it does the situation under the All Volunteer Force. The sentiment I experienced during my thirty years of military service was the opposite of the above.

But let us assume, for argument's sake, that there is some kind of divide between those who serve in the military and those who do not. There are many good reasons why such a divide would be in the national interest. A 2013 study commissioned by the Office of the Under Secretary of Defense for Accession Policy found that only 13 percent of America's youth meet the quality standards for service in the military. Excluding 87 percent of American youth from service because they do not qualify could be a divide of sorts, but certainly one that benefits the nation's interest in a strong military.

The most obvious example of a difference between the military and general society is that the military operates under a separate set of laws and regulations. The men and women of the military must be ready to obey any lawful command, even if it could result in their death.

There are many other reasons why the military community lives under different standards and laws. But these differences do not necessarily mean there is a divide between our service members and the general population any more than there is a divide with professional athletes or emergency responders.

Military members are, as a group, proud of the sacrifices they make in service. I wager that most military service members would not trade their strict standards of discipline and conduct for those of the general civilian population; especially because they voluntarily signed up for those standards. And judging by the public support for military service members, any divide, if it exists, is not harmful to the relationship between the military and public. In Gallup's annual Confidence in Institutions poll, the military has topped the list every year since 1998, with at least 72 percent expressing “a great deal” or “quite a lot” of confidence in the military.

“If only in a small way, the DoD's [Department of Defense's] dependence on civilian contractors clearly degrades the cost-savings and efficiencies that served as the basis for transitioning to an AVF.”

The proposition that the logistical requirements for our deployed forces could better and more efficiently be served by drafting enough additional troops to address them deserves some investigation. I served in the Army under both the current and previous models and often wondered the same thing. But I do not think the case has been adequately made that the costs would be lower for the same or better quality of logistical support—especially when one considers the numbers of troops, leaders and units required, along with the acquisition and maintenance of the logistical materials needed. For example, the additional downstream costs for retirement and health care for additional troops would have to be figured into the calculations. This rationale certainly should not be a justification for a draft in and of itself.