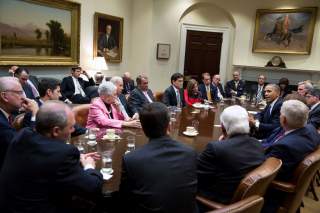 Last week, at Defense One, Michèle Flournoy and Richard Fontaine, heads of the Center for a New American Security (CNAS), lamented the disappearance of the bipartisan foreign-policy “consensus” of the Cold War era. Attributing its downfall to a number of factors, they argued that the absence of such a consensus has had negative consequences—most notably sequestration—and asserted that there is a need to “rebuild that consensus.” CNAS’s annual conference, also held last week, might be seen as an effort to do just that, with leading national figures of both parties such as National Security Adviser Susan Rice and Representative Paul Ryan speaking there.

On Tuesday, at a conference organized jointly by the American Conservative and the American Prospect, came a riposte of sorts. The message was that the “consensus” that Flournoy and Fontaine see as being endangered is in fact well entrenched in official Washington—but it shouldn’t be. According to the event’s organizers, today’s elites, whether Democratic liberal interventionists or Republican neoconservatives, all tend to promote an expansive foreign policy that overstates the real threats to the United States and interferes in too many places overseas.

If there was an overriding theme to Tuesday’s event, it was about exploring the costs of the existing consensus strategy. Barry Posen, speaking about his new book Restraint, highlighted the problems posed by the incentives that this strategy gives to U.S. allies, who both free-ride on America’s defense spending and act more provocatively than they might otherwise, thinking that Washington will always have their back. A panel consisting of Adam Serwer, Marcy Wheeler and Conor Friedersdorf made the case that America’s pursuit of absolute safety from foreign threats had resulted in a security state that unacceptably impinged on its citizens’ civil liberties at home. And, of course, running throughout the conference was a recognition of the enormous costs in both blood and treasure of the past dozen years of war in Iraq, Afghanistan and elsewhere.

What is needed instead, said Daniel McCarthy, editor of the American Conservative, is a “kind of counter-consensus.” It would be made up of a loose alliance of antiwar liberals and conservatives, realists and civil libertarians. It would seek to roll back many of the policies mentioned above, and replace them with an alternative model in which America spends less on its armed forces and uses military force only when its vital national interests—narrowly defined—are truly at stake.

There are clearly a number of major policy disagreements between the two visions. But what’s perhaps more interesting is the difference in just how exactly both sides think (or hope) that their preferred “consensus” will come together. Flournoy and Fontaine worry about the public’s “widespread skepticism about American government and the nation’s ability to engage effectively abroad,” citing a recent poll that stated that a majority of Americans—a record number—believe the United States should “should mind its own business internationally.” The answer, they write, is to “identify pragmatic and principled national security policies that can win support from Democrats, Republicans and independents” in order to “forge a sustainable path ahead for American internationalism.” Meanwhile, the advocates of restraint note that many of the public’s intuitions about foreign policy are already on their side. They hope that through some combination of persuasion and political pressure, these views will start to become better represented within the Washington elite.

Both sides have an uphill struggle in front of them in this effort. As the Cato Institute’s Christopher Preble pointed out at the conference Tuesday, interventionists are fond of assuming that the public can be rallied to support any aggressive policy through “leadership.” If the president isn’t able to rally public support, it’s because he didn’t “lead” enough. Yet, as Preble observed, this is an inherently unfalsifiable claim, and indeed, there’s almost never any good reason to believe that it’s true. On the other hand, within official Washington, there is a strong status quo bias, and there are few powerful institutions or interests pushing a strategy of restraint. And barring major disasters like failed wars, the public tends not to vote based on foreign-policy issues. The end result, it seems, is that the gap between public and elite views on foreign policy is likely to persist well into the foreseeable future.

Still, there’s one larger question that remains unanswered: Why is a foreign-policy consensus desirable in the first place? No doubt anyone who writes on public-policy issues is hoping that their views come to be adopted by others. However, there’s no immediately obvious reason why the simple existence of a consensus—independent of its actual content—is a good thing.

Consider one example. In Posen’s 2013 Foreign Affairs essay, “Pull Back,” he sketched out some of the ideas that would go into his strategy of restraint. This strategy would involve, he wrote, “giving up on global reform and sticking to protecting narrow national security interests.” The three most important of those interests would be preventing the rise of a rival hegemon in Eurasia, countering nuclear proliferation and fighting terrorism. Under this approach, Washington would remove “large numbers of U.S. troops from forward bases, creating incentives for allies to provide for their own security.” And the size of the U.S. military would shrink significantly, with the number of ground forces cut in half and the size of the navy and air force reduced by roughly a quarter.

Compared to the status quo, this is a fairly radical proposal. It’s hard to think of any elected or appointed official—or even very many prominent commentators with large platforms—who would endorse this program of action. However you define the existing consensus, Posen is certainly outside of it.

Are we better off for that? By way of an answer, consider some of the policies that the United States has actually pursued since 2001: Multiple wars and expansive state-building efforts that have achieved few of their stated objectives. Indefinite detention. The embrace of torture. As Friedersdorf noted on Tuesday (and as he’s written previously), these decisions were the products of the “mainstream” consensus of the day, and they still had disastrous consequences. Groupthink within a consensus can be deeply damaging, just as voices that are considered “outside the mainstream” can be.

All of which is to say that a foreign-policy consensus in any form is neither necessary nor even especially desirable. You don’t have to support every element of Posen’s agenda (this writer doesn’t) to see the advantages of having voices like his be better represented within the Washington elite. Having a real diversity of opinion—not just on tactical questions, but also on fundamental ones about what America ought to be trying to achieve in the world—guards against ossification and groupthink. After all, even if one school of thought has exactly the right approach at a particular point in time, for a particular challenge, that’s no guarantee that its adherents are going to be right about any and all future challenges. In short, the counter-consensus that McCarthy and others described is not about to displace the prevailing consensus in the halls of power anytime soon. But it doesn’t have to in order to be a project that is well worth pursuing.