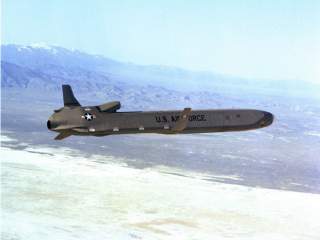 That's the argument made by a Federation of American Scientists (FAS) essay, which takes aim at the Pentagon's $30 billion plan to develop the Long-Range Standoff (LRSO) weapon, an air-launched and nuclear-tipped cruise missile. The FAS believes that a new, stealthy and conventionally armed cruise missile, the Joint Air-to-Surface Standoff Missile-Extended Range (JASSM-ER) is a better and cheaper choice. "The new nuclear cruise missile will not be able to threaten targets that cannot be threatened with other existing nuclear weapons," writes Hans Kristensen, director of the FAS's Nuclear Information Project.

"And the Air Force is fielding thousands of new conventional cruise missiles that provide all the standoff capability needed to keep bombers out of harms way, shoot holes in enemy air-defenses, and destroy fixed and mobile soft, medium and hard targets with high accuracy—the same missions defense officials say the LRSO is needed for."

The LRSO, for which cost estimates range from $20 billion to $30 billion to develop and  manufacture 1,000 missiles, is supposed to replace the aging 1980s AGM-86 Air-Launched Cruise Missile (ALCM), now carried by aging 1960s B-52 bombers. The LRSO, which is the ALCM's replacement, would be borne by the Air Force's proposed Long-Range Strike Bomber (LRSB), the successor to the B-52 and B-1.

What will happen to the LRSB remains to be seen: Boeing and Lockheed Martin have filed protests against the Pentagon's award to Northrop Grumman of an LRSB contract that could eventually total $80 billion. And at an estimated $564 million per bomber, there will be plenty of critics who say that a drone or a missile can do the job more economically.

But which missile? As Kristensen sees it, the 1,500-mile-range LRSO would let bombers stay out of enemy air defense range, but then so could the 750-mile-range JASSM-ER. LRSO could penetrate those air defenses, but so could the stealth-shaped JASSM. The accuracy and destructiveness of smart bombs has increased immensely since the 1980s, so targets that might have required a nuclear bomb can now be eliminated by conventional weapons like JASSM. So why spend all that money to develop an expensive new LRSO when the JASSM-ER is already being deployed?

However, Kristensen makes a more fundamental point: an adversary susceptible to deterrence by nuclear weapons will be deterred by the vast array of U.S. nuclear delivery systems, from ICBMs to aircraft bombs, regardless of LRSO. Which in turn suggests that an adversary undeterred by American nukes will not be any more afraid of LRSO.

With President Obama advocating deep nuclear arms cuts, it is ironic that the Pentagon is proposing development of a new strategic weapon (and would even more ironic if expensive LRSOs were eventually scrapped under a new arms control treaty). Nonetheless, even if you believe that America needs its nukes, the question becomes how many and how advanced they must be. The relationship between the U.S., Russia and China no longer seems based on nuclear deterrence: double or triple the number of American warheads, and it's hard to believe that China would suddenly stop its expansion in the South China Sea.

And if that's the case, then maybe that $80 billion for LRSO is better spent somewhere else.