America Doesn't Owe China Anything after the Verdict 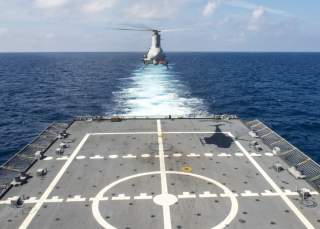 The accepted wisdom has it that, as a general rule, Chinese leaders should not be made to “lose face.” In the wake of last week’s Permanent Court of Arbitration award in Philippines v. China, a veritable chorus of China hands has called for the United States to support the ruling, but to avoid rubbing Xi Jinping’s nose in the dirt. Giving “face” to Xi Jinping—essentially, allowing him to escape the current predicament without incurring further shame—is important if we are to avoid a dangerous escalation of tensions, or so the thinking goes.

There is a certain logic here. Xi Jinping has just suffered a significant defeat on the international stage, and at the hands of lowly Manila, no less. Should other countries now act with what Chinese citizens or leaders perceive to be disrespect, Xi will look weaker and more ineffective than he already does. He may fear for his grip on power. He might feel he has little choice but to take steps that make him appear strong—whether that means building on Scarborough Shoal, seizing an island from another claimant or increasing military presence around the disputed Senkaku Islands in the East China Sea.

These and other outcomes, of course, are preferably avoided. If there is reason to believe Xi Jinping is prepared to pursue a face-saving, constructive, diplomatic climb-down, the United States should give him the space to do so.

But Xi Jinping’s confidence that Washington will never push too hard is one of the reasons we are in this mess in the first place. China’s leaders know that Washington is hesitant to make them “lose face,” that Washington does not hold at risk what they value most—their domestic legitimacy. As a result, they are not overly concerned about maneuvering themselves into a position between a rock (Chinese nationalists) and a hard place (looming international crisis), which never turns out to be all that hard.

Washington should privately make clear to Xi Jinping that it is prepared to take steps intended to make him lose face should he refuse to adopt a more constructive approach to disputes in the South China Sea. For example, the United States could warn the Chinese president that it will lobby for a relocation of this year’s G-20 summit, arguing that China’s blatant disregard for international norms and its own treaty commitments disqualify it from hosting the annual gathering.

The United States will have to be prepared to deal with further Chinese provocations and should explain that such provocations will have consequences. A further militarization of the Senkaku dispute might lead to a U.S. declaration that it formally recognizes Japan’s claims. A move to build facilities on Scarborough Shoal would lead to an explicit U.S. statement that the mutual defense treaty covers Philippine territory in the South China Sea. The dispatch of fighter jets to China’s Spratly airfields could result in U.S. forces jamming Chinese radars in the archipelago.

Going forward, Xi Jinping should have little reason to assume that, regardless of how China behaves, he will have an American partner in ensuring he saves face. When it comes to the South China Sea, U.S. leverage over China goes far beyond freedom of navigation operations. It’s time to start using it.