America: Don't Pivot Away from the Trans-Pacific Partnership 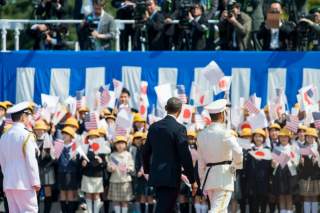 As hopes for the United States to sign on to the biggest global trade deal to date rapidly deteriorate, the cost of U.S. political deadlock may be felt most painfully in Asia in the near term. But in the long run, the cost of Washington’s political impasse won’t simply be about missing an opportunity to take a leading role in shaping trade relations in the world’s most populous region. A delay or a watering down of the Trans-Pacific Partnership (TPP) pact will, in fact, hurt the United States’ political relations as much as its economic relations with countries that are key to keeping the peace in an increasingly unstable region.

With midterm elections on the horizon and the summer season to hit before that, odds of the Trade Promotion Authority (TPA) being passed to allow the White House to push forward with a negotiated deal with the other eleven member countries before the end of this year are becoming increasingly unlikely. Yet as China disputes territorial claims in both the South China and East China Seas and historical grievances over the legacies of war and occupation heat up nationalism across the region, ensuring strong continued economic growth in the Asia-Pacific is as much in the United States’ national interest as it is for Japan, Australia, Vietnam, Malaysia, and other U.S. allies. For that alone, a trade framework such as TPP, which would further integrate the economies of Asia with the United States, is critical.

Certainly, that is the view shared by some members of Congress including Congressman Devin Nunes, who argued that “economic security leads to security” politically and militarily at a recent Washington conference. In fact, during his discussion on the value of the newly created Congressional Japan caucus at a recent Washington conference, Nunes focused most of his time emphasizing the need for the United States to make sure TPP concludes successfully, and for Congress to give the White House the authority to ensure its speedy adaptation by approving TPA’s fast-track process.

By resolving their differences over trade barriers in agriculture and the automotive sector respectively, TPP would allow Japan and the United States not only to further their bilateral relations, but also to ensure that the two countries that have spearheaded growth in the region post–World War II continue to be at the helm of a trade framework defining the future. After all, not for nothing is the TPP often referred to as the economic component of the U.S. rebalance to Asia, which has largely focused on how to enhance Washington’s military engagement in the region. Most notably, TPP would continue to keep China on the sidelines of founding a new trade regime that accounts for about 40 percent of global GDP. It also challenges the United States to be a reliable partner in a region increasingly mired in hostilities with few effective intergovernmental agencies or commonalities to unite them.

But U.S. commitment to the TPP goes far beyond simply solidifying ties with the eleven other member countries. As the United States drags its feet on committing to the trade deal, its reticence could hurt states that are not yet signatories to the pact. Taiwan, for instance, continues to struggle in balancing its ever-intensifying economic ties with China on the one hand, while remaining a separate government on the other. In March, Taipei students took to the streets and occupied the Taiwanese parliament for twenty-four days to protest against a trade deal that would further integrate its economy with Beijing’s. The services industries pact, which is part of the broader Economic Cooperation Framework Agreement (ECFA) between Taiwan and China, is slated to open up many sectors, including politically sensitive ones such as banking and the media, across both sides of the Taiwan Strait. Students protesting against such a move have won for now as the Taiwanese legislature postpones concluding the bill until a legal framework is in place to oversee all of Taiwan’s deals with China. Yet as China remains Taiwan’s single biggest trading partner, even as public wariness about further integration with the mainland grows, Taipei must seek out alternative trade regimes to join to avoid being isolated from the global markets.

Top Taiwanese trade officials have stressed the importance of the island joining the TPP down the line if its export-oriented economy is to thrive in the future. Otherwise, it would have no alternative to depend even more on Beijing’s markets, either through furthering the bilateral economic agreement under ECFA, or through joining the Regional Comprehensive Economic Partnership (RCEP) free-trade agreement, which is a less stringent pact under negotiation among sixteen Asian nations to which China belongs, but the United States does not. That, in turn, would only strengthen Beijing’s hold on Taipei which will invariably tip the political and security scales in favor of China, furthering escalating tensions in Asia.

Similarly, while South Korea is currently not a member country of the TPP, expectations are high that it will become a signatory once the deal is sealed. That would, of course, further solidify Seoul’s bilateral free-trade agreement with Washington of March 2012. More importantly, though, it would anchor South Korea’s political and economic relations with the United States, even as China has overtaken the United States as its single largest trading partner.

By failing to conclude TPP in a timely manner, U.S. standing as a reliable partner in the Asia-Pacific region will come into question. In fact, during his visit to Washington in late April, Japan’s senior vice minister of the Cabinet Office, Yasutoshi Nishimura, admitted that he “often gets asked” by fellow parliamentarians about whether the United States will be able to follow through on the commitments USTR negotiates at the table on behalf of the government.

An inability for the United States to adhere to its commitments at the negotiating table runs the risk of antagonizing some of its most critical allies in a region that is fraught with tension. A successful conclusion to TPP is a prerequisite for the United States to give confidence to its regional allies that Washington is committed to completing the rebalance to Asia. It is also in the nation’s own interest that it remain a counterbalance to the ever-growing economic and military presence of China in the Asia-Pacific and beyond.