'America First' Versus 'One China' 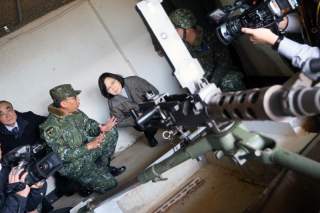 Donald J. Trump is now the forty-fifth president of the United States. As president of the world’s strongest democracy, Trump is bound by the Take Care Clause of the U.S. Constitution to execute the laws of the land—laws such as the Taiwan Relations Act of 1979. Under the principle of separation of powers enshrined in the U.S. Constitution, the executive branch—now headed by President Trump—is responsible for implementing the laws of the land by formulating policies.

As president-elect, Trump indicated that his administration’s approach to foreign policy would not be bound by the outdated conventions and self-imposed restrictions toed needlessly by previous administrations. He suggested that those policies would be recalibrated to better suit American interests in the twenty-first century. Indeed, the president-elect took a congratulatory phone call from the democratically elected leader of Taiwan—a key security partner of the United States—and questioned the efficacy of the former administration’s China policy.

Despite the public outcry, nothing Trump said or did as president-elect changed U.S. policy or the law. Also, Trump was completely within his legal rights to take a phone call and “question” the former administration’s policies. (Former president Obama said as much when he stated, “I think all of our foreign policy should be subject to fresh eyes.”) Additionally, even if President Trump does change U.S. policy, there is nothing to legally stop him from doing so.

While much fuss has been made about the policies in question, there has been limited discussion about the dangerous logic that feeds the fear over the president’s questioning of policy. Lost in the polemic discourse following the president’s comments is a recognition of the legal underpinnings of U.S. policies toward Taiwan, which remain ever constant, and the elasticity of the U.S. “One China” policy itself.

The reaction, even among experts, was telling and laid bare a critical blind spot in the United States’ approach to cross-Strait relations. To be sure, U.S. policy towards Taiwan has operated over the past forty-five years on the premise that America’s primary interest is in the process—as opposed to the outcome—of resolving differences between the two sides of the Taiwan Strait.

It was inherently a passive policy by design, but the emphasis on process intentionally ceded the initiative of shaping the outcome to the two other parties: Taiwan and the People’s Republic of China. It was an approach that some senior policymakers at the time expected would create a fait accompli, yet it provided Washington, DC with the flexibility to adapt and respond to broader geopolitical challenges while maintaining stability in the Taiwan Straits.

Despite expectations to the contrary, Taiwan thrived in the ensuing four decades. The government liberalized from the top down while an active civil society fervently pushed for political reforms from the bottom up. Taiwan evolved from an authoritarian government to a vibrant democracy. Support for Taiwan and its democracy grew within the United States as well.

As the power disparity between the two sides widens, however, the policy focused on the process is increasingly under strain and has left Taiwan more susceptible to coercion and Beijing more emboldened to use military force. Indeed, the PRC is gradually and unceasingly pushing toward its own desired outcome for Taiwan. All the while, America’s focus on process is drawing it towards China’s objectives at the expense of its values and strategic interests.

Some American scholars and former policymakers have sounded the alarm about the need to accommodate China by reaching a new modus vivendi with Beijing, which will effectively abandon Taiwan. A debate over a Hobson’s choice, however, obscures a much-needed discussion about a Taiwan strategy that not only focuses on ensuring a peaceful process but also a vision for a desired outcome.

As the two sides of the Taiwan Strait struggle to engage in dialogue, the scope of this process-based approach to policymaking has barred U.S. policymakers from actively shaping conditions in the Taiwan Strait that would be more conducive to long-term peace and stability. This outdated and partly flawed premise of the approach is based on a Washington tendency to construct events in the Taiwan Strait in binary terms: independence or unification. That is a false dilemma, which Beijing has framed as a Hobson’s choice.

On ensuring a peaceful process, the Taiwan Relations Act—which legally governs relations between the United States and Taiwan—sets out the primary goal of U.S. policy towards cross-Strait relations as ensuring that the resolution is “not coercive, unilateral, or detrimental to U.S. interests.” Towards that end, the new president has a lot of tools and legal authority at his disposal to recalibrate Taiwan policy.

Five provisions within the Taiwan Relations Act are useful to highlight:

• The future of Taiwan will be determined by peaceful means.

• Consider any effort to determine the future of Taiwan by other than peaceful means, including by boycotts or embargoes, a threat to the peace and security of the Western Pacific area and of grave concern to the United States.

• Provide Taiwan with arms of a defensive character.

• Maintain the capacity of the United States to resist any resort to force or other forms of coercion that would jeopardize the security—or the social or economic system—of the people on Taiwan.

•  The preservation and enhancement of the human rights of all the people on Taiwan are hereby reaffirmed as objectives of the United States.

On the second prong, former Pentagon official and Air Force Lt. Col. Mark Stokes mapped out possible future policy options in the Taiwan Strait. The report, known as The United States and Future Policy Options in the Taiwan Strait, outlines four alternative schools of thought on the future of Taiwan policy: The Accommodation School; The Status Quo School; The Normalization School; and The U.S. “One China, Two Governments” School. As Stokes astutely observed in a recent follow-up article, “U.S. policy has yet to catch up with the changes that have taken place on Taiwan since 1996, especially since the first peaceful transfer of power in 2000.”

Despite all the uproar, the new U.S. president—with his iconoclastic persona—has not changed U.S. policy. Rather, his administration has raised an important and fundamental question about the long-term viability of this current approach to policy. To be sure, the previous ambiguous approach has outlived its utility, and the effects have been an emboldened Beijing and a Taiwan that is now being gradually pushed into a corner (see, e.g., Beijing’s diplomatic offensive).

Alternatives to a gradual change in policy present equally destabilizing propositions, and there is a great deal of uncertainty that comes with any change. However, a fear of change could lead to a state of paralysis that is equally disruptive in the Taiwan Strait. A one-sided focus on the process has left U.S. interests increasingly susceptible to the vagaries of cross-Strait relations and Beijing’s increasing leverages. Indeed, policy towards Taiwan has operated over the past forty-five years on the premise that America’s primary interest is in the process—as opposed to the outcome. It is time for U.S. policymakers to refocus on a desired outcome.