Is America Getting ‘Compellence’ Wrong in Ukraine? 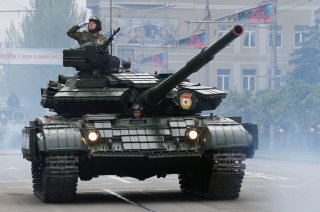 From November 1990 through January 1991, in preparation for the first Gulf War, the U.S. Army, Marine Corps, and Coalition Forces moved into assembly areas near the Iraqi border and trained for months while rehearsing and preparing a credible invasion force. The purpose for this very visible, months-long build-up was to compel Iraq’s leader, Saddam Hussein, to withdraw from Kuwait, preferably without military action but prepared to use force if need be. This is essentially what the Russian forces are doing now along Russia’s frontiers with Ukraine.

Compellence is the opposite of deterrence and is historically much trickier. American economist and arms control expert Thomas C. Schelling, who won the Nobel Prize for Economics in 2005, coined the word in his 1966 book Arms and Influence. Schelling described compellence as a direct action that persuades an opponent to give up something that is desired. He distinguished compellence from deterrence, which is designed to discourage an opponent from action by threatening punishment. Deterrence is designed to avoid taking costly actions, but compellence requires costly actions and implies escalation.

As the new year begins, Russian Ground Forces are starting the third month of their normal six-month training cycle, becoming more trained and ready each day. The Ukrainian military knows and understands this. They likely have two months at most until Russian forces are at peak readiness as a force to compel demands from the United States and NATO, or to invade Ukraine, or both.

In the case of the first Gulf War in 1991, Saddam “got compellence wrong.” He doubted U.S. and Coalition intent and thought the deployments were a bluff. He failed to take the growing threat seriously enough. It took the destruction of much of Iraq’s military for the Coalition to achieve its objectives and convince Saddam that it was not a bluff.

It still seems hard to believe that Saddam did not see the clear signals. Could we be missing similar signals? This time, if the United States and NATO allies get it wrong, the price of miscalculation might be the Ukrainian military, Ukrainian independence, or all Ukrainian territory east of the Dnieper. Would Vladimir Putin really move so many forces for so long as part of an elaborate, months-long ruse?

In 1938, the United Kingdom, France, and other European powers got compellence wrong both in Munich and Czechoslovakia. Fearing war, the UK and France spurned the Czech government and accepted Adolf Hitler’s demands for Western European powers’ neutrality. Within months of an agreement with Britain’s Neville Chamberlain and France’s Edouard Daladier, Hitler proved his own build-up was no bluff and seized or neutralized all remaining parts of Czechoslovakia. Hitler achieved all his goals in Czechoslovakia and undermined the credibility of Britain and France.

Putin is no doubt searching for his Neville Chamberlain. Putin aims to turn Ukraine back into a vassal state and to undermine NATO.  Are we getting compellence wrong?  Could we be blind to the signals like Saddam? Could we unintentionally sacrifice Ukraine’s sovereignty for Russian guarantees that will become meaningless once NATO’s credibility is lost?

Retired Colonel Jeff Hartman is an Associate Professor of the Russian Way of War at the George C. Marshall Center. He served as U.S. Senior Defense Official/Defense Attaché in Tbilisi and Tashkent, and as the Chief of International Affairs for the U.S. Army.