America Is Getting Outclassed by Russian Electronic Warfare 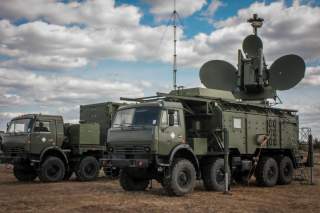 The Russian military-industrial complex was successful in showing off the latest technologies during last month's Army-2017 military expo. This international forum, held outside Moscow, showcased hundreds of land, air and sea-based systems, and was attended by hundreds of thousands of visitors. The high-profile event culminated with Russia signing nearly $170 billion rubles ($3 billion) worth of contracts. Among major accomplishments for the Russian defense industry was the delivery to the military of the latest electronic warfare (EW) systems—“Vitebsk,” “Krasuha” and “Moskva.”

Russian daily Svobodnaya Pressa published an analysis of Russian EW capabilities as they stand today, with a possible nod towards the “Zapad-2017” military exercise and NATO’s resulting anxiety. The paper notes that Russia's qualitative EW superiority vis-a-vis the West is also quantitative—during the past decade, more than a dozen systems underwent state trials and evaluations: “Borisoglebsk-2,” “Algurit,” “Rtut-BM,” “Infauna,” “Krasuha-4,” “Moskva-1,” “Parodist,” “Lorandit-M,” “Leer-3,” “Lesochek,” “Less,” “Magnyi-REB,” “Pole-21,” “Hibini” and “Vitebsk.” Among these are systems designed for localized short-range action; those that protect aircraft, ships and soldiers in a given area of operations; along with systems that neutralize explosive detonators in IEDs and other devices. This list also includes powerful systems with an extensive zone of operation, such as “Krasuha-4” and “Moskva-1.” The paper further notes that the last two systems are built “on the principles that had not previously been used in radio engineering.” In order to suppress radio signals in their entire spectrum, a large set of radiating antennas with extensive power sources are no longer required to create powerful jamming of adversary’s signals. Today, modern means of detection and processing allow these systems to receive an exact copy of enemy signals followed by the generation of analog signal by changing the parameters necessary for the counteraction. Therefore, “a false signal in a distorted form is returned to the enemy”—such counteraction is called “nonenergy interference.”

According to Svobodnaya Pressa, the “Moskva-1” system, developed by KRET (Radio-Electron Technologies Group), conducts radio-technical intelligence: it gathers information about sources of electromagnetic radiation in a radius of 400km (250 miles), including from aircraft, homing missiles, mobile and stationary air-defense systems, radio transmitters and other objects emitting radio waves. These signals are analyzed and classified according to their sources. In case of a massive attack against the adversary, the collected information is transmitted to nine electronic warfare systems, which “blind” their targets, generating interferences; the data also gets transmitted to Russian air-defense forces. The paper notes that all exact specifics regarding the characteristics and technical details of this system’s operations is classified information. However, in the case of a massive attack by the enemy, “Moskva-1” would help to obtain information on all enemy targets necessary for their detection, recognition, tracking and delivery of target designation. This information is extremely useful for EW systems, since these jammers get information about enemy technologies in order to optimally suppress their electronics.

Data from the “Moskva-1” is useful for anti-aircraft missile systems, including the latest S-400 complex, which has the same range of detection as “Moskva-1.” The paper comments that in case of an enemy attack, S-400 sees an “object” and determines its speed, direction of flight and tracks its movements—in contrast, “Moskva-1” can also identify whether it is a rocket or an airplane and determine its type, thus facilitating interception. Until recently, it was impossible to house a system with such serious capabilities on three wheeled chassis. The breakthrough was made as a result of the transition from the analogue to digital technologies. In this case, computing power increased substantially, sifting through greater volumes of information taken from system’s antennas; improving such calculations enabled the use of new, more advanced algorithms for data processing.

Svobodnaya Pressa further notes that the “Krasuha-4” EW system, also built on digital technologies, is designed to defend against the attack on command posts, force groupings, industrial and administrative facilities. The system suppresses the functioning of electronics-powered stationary and mobile objects with the help of interference effects in what the paper describes as“smart” operations in order to distinguish between enemy and friendly signals in “Krasuha’”s area of operations. This system is capable of blinding not only enemy fighters or bombers, but also ground-based radars, AWACS aircraft and even spy satellites, since “Krasuha”’s horizontal and vertical ranges reach three hundred kilometers (two hundred miles). This system also counters enemy drones and unmanned systems. The paper notes that “Krasuha’”s complexity is indicated by the time spent on its development, which began in 1995, with the final adoption by the Russian military in 2012. Its final version, notes the paper, “turned out to be rather compact, fitting on two wheeled chassis for faster and easier transport.”

In 2015, “Krasuha-4” was deployed at the Khmeimim Russian military base in Syria. During the attack on Syrian army airfield there by Tomahawk missiles, various media reports indicated that “Krasuha” forced some of the missiles off-target. The critics categorically disagreed with this assessment, since the Tomahawks’ geolocation and targeting is not based on a radar, but rather optic-electronic system with a high-resolution matrix. The paper notes that these missiles’ targeting has electronic nodes, which may have been affected by “Krasuha.” These EW systems participated in numerous Russian military exercises, defending against potential enemy's air attacks, during which Su-24 front-line bombers, as well as brand-new Su-34 aircraft could not find their targets while being in “Krasuha’”s zone of operation, thus returned to bases without completing the assignments.

The third technology mentioned by the paper, “Vitebsk” is an onboard defense system designed to protect Mi-8 helicopters from MANPADS missile fire; it is also designed for use by attack aircraft and helicopters in ground attack operations, when they have to fly at an altitude accessible to Stinger surface-to-air missiles. This system includes an infrared and ultraviolet direction-finding device for rockets, laser and radar detection equipment, an optical-electronic suppression station, an active radar jamming station, and an ejection device for releasing false targets. “In other words,” notes Svobodnaya Pressa, “defending against all interference types—radar (both active and passive), thermal, laser and optic-electronic.”

The Russian military is working on other EW systems capable of quick and effective action against the increasing sophistication of Western unmanned systems. One such technology is the recently-announced “Repellent,” designed to detect and neutralize drones at a distance of up to thirty-five kilometers (twenty-two miles). Russian developers claim that “Repellent” is able to detect miniature drones during day and night, in bad weather, and operate even in the “most challenging Arctic conditions, at temperatures below minus 45 degrees and strong winds.” To achieve greatest effectiveness against swarms of miniature drones—a major area of concentration expressed by American military developers—“Repellent” will also be available in a portable version that can be carried and fielded by several people for rapid deployment.

Russian deployment and utilization of such diverse EW systems does not bode well for American and NATO forces, which have been expressing concern with such developments for the past several years. In 2016, U.S. Air Force General Breedlove admitted that the Pentagon had neglected electronic warfare during the past two decades, allowing the Kremlin to gain an advantage. Lt. Gen. Ben Hodges, the commander of the US Army in Europe, has described Russian advances in electronic warfare in Syria as “eye watering.” In 2015, as Russian involvement in Syria increased to military operational tempo, Lt. Gen. Edward Cardon stated that United States “was not making progress (in electronic warfare) at the pace the threat demands.” That same year, it became clear to the U.S. military that Russian investment in electronic warfare capabilities may have outpaced anything available in the West—Col. Jeffrey Church, the U.S. Army’s chief of electronic warfare, noted that Russian forces have entire companies, battalions, and brigades dedicated to the electronic warfare mission, deploying with specific equipment and warfare chains of command.

Fast forward to 2017, and the U.S. military is making sure it has the technology and potential to counter Russian advances—the Department of Defense is now mulling the possibility of designating the electromagnetic spectrum as a warfighting domain—like the air, sea or land. The U.S. Army is requesting that its long-range drones all acquire electronic warfare capability. It should be noted that one of Russia’s recent EW advances came in the form of a duo/trio of mid-range “Orlan-10” UAVs delivering cell phone jamming capabilities as part of the “Leer-3” system. No doubt United States was observing this system closely as it was reportedly used in Eastern Ukraine and Syria. Although major steps have now been taken in the right direction, the sheer diversity and advanced nature of Russian EW capabilities may present a serious challenge to the American and NATO forces, due to the aforementioned lack of attention and resources to this problem set. Following Russian EW application in Syria, as well as reported use in Ukraine, Western observers have the chance to see what they are up against during the “Zapad-2017.”

Observing Russian EW technology application will prove key to working out American attack and countermeasure principles—Svobodnaya Pressa noted that military theorists calculated that electronic warfare capabilities can increase combat potential of ground forces up to two times and reduce aircraft losses up to six times. With such stakes on the line, the EW technology race is only projected to heat up in the coming years.