Is America Going to Turn on Pakistan? 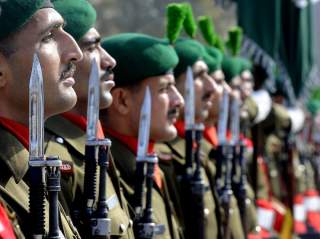 Last month Reps. Ted Poe and Dana Rohrabacher cosponsored a bill in the U.S. Congress known as the Pakistan State Sponsor of Terrorism Designation Act. Congressman Ted Poe introduced the bill with the following words: “From harboring Osama bin Laden to its cozy relationship with the Haqqani network, there is more than enough evidence to determine whose side Pakistan is on in the War on Terror. And it’s not America’s.” If passed, this bill would require the U.S. government to produce a detailed report, weighing whether to designate Pakistan as the state sponsor of terror. In contrast, a day later, China affirmed its unflinching support for Pakistan’s position on terrorism and vowed to use Chinese membership in all international fora to amplify that position. Whatever measures the United States takes against Pakistan’s use of terrorism as an instrument of its foreign policy, one thing is clear: America is rapidly handing over the tools for reining in that country’s terror policy to China.

First, China has emerged as the principal supporter of Pakistan’s longstanding policy of training and equipping terror groups, and it is willing to use its diplomatic resources to defend that policy at all international forums. Although Pakistan justifies its support for terror groups in terms of liberating part of Kashmir from India, the evidence shows that this support extends to providing safe havens to terror groups that have worldwide operations. A Department of State country report for 2015, released in June 2016, concludes that “Pakistan has also not taken sufficient action against other externally-focused groups such as Lashkar-e-Tayyiba (LeT) and Jaish-e-Mohammad (JeM), which continued to operate, train, organize, and fundraise in Pakistan.” In the past, Pakistan has also depended on China to block U.S. efforts to designate Lashkar-e-Taiba, Jaish-e-Mohammad and other related fronts as terrorist organizations at the United Nations Security Council. It is precisely for this reason that Poe’s statement has particular resonance in Washington: “Not only is Pakistan an untrustworthy ally, Islamabad has also aided and abetted enemies of the United States for years.”

While the United States and most other states are convinced that Pakistan is pursuing a deliberate policy of supporting international terrorism, China is increasingly using its influential position in major international organizations to highlight Kashmir as an important issue for which Pakistan needs to train and arm freedom fighters. The contrast in the American and Chinese positions could not be starker. While Poe introduces a bill in the House of Representatives in Washington to designate Pakistan as a state sponsor of terrorism, Chinese premier Li Keqiang holds a meeting with Pakistan’s prime minister in New York to affirm his country’s support for Pakistan’s position on terrorism. The Chinese premier phrased his support this way: “We support Pakistan and will speak for Pakistan at every forum.”

Second, China has become a preferred source of Pakistan’s economic support, without much attention to how to stop diversion of that money to terror groups. It is certainly emerging as a reliable investor, replacing on-and-off aid from the United States. Last year, China announced a plan to invest $46 billion in Pakistan’s economy through massive energy and infrastructure projects. These projects have the potential to improve much of Pakistan’s dilapidated transportation infrastructure, and produce energy to power its ailing economy, none of which U.S. economic support could do. Although the United States provided Pakistan with more than $31 billion in the period 2002–14, Americans have become increasingly impatient with Pakistan military’s diverting of funds to terror groups and the ever-growing use of those groups to achieve country’s foreign policy goals. Congressman Poe echoed this frustration well: “It is time we stop paying Pakistan for its betrayal and designate it for what it is: a State Sponsor of Terrorism.”

Third, China is also deeply involved in building Pakistan’s nuclear-weapons program, without any concern for those weapons falling into the hands of terror groups. Al Qaeda had a strong presence in Pakistan both before and after the September 11, 2001, attacks, with a fairly sophisticated mechanism to plan and execute operations. It is also no secret that Osama bin Laden was found hiding in Pakistan. As the State Department’s report highlights, some of the most organized terror groups, such as Lashkar-e-Taiba, the Taliban, Jaish-e-Mohammad, the Haqqani network and others, continue to operate from Pakistan even today. The suspect in last month’s  New York and New Jersey bombings also appears to have connections with the Pakistani Taliban.

Driven by these concerns about Pakistan’s nuclear weapons falling into terrorist hands, the United States has over the years opposed Pakistan’s expansion of its nuclear program and, when that failed, pressured the country to prepare a contingency plan for its safety. In contrast, China has actively supported Pakistan’s nuclear program, supplying some of the critical components for its operation. China appears undeterred by the outcome of Pakistan’s nuclear weapons falling into terrorists’ hands. Some externally focused terror groups, such as the Afghan Taliban and Haqqani network, which the U.S. Department of State’s 2015 report points out are active in Pakistan, have had close links with influential military or other institutions in the country, through which they could get access to nuclear weapons. For these reasons, the State Department report concluded that Pakistan did not take substantial action against the Taliban or Haqqani network, or substantially limit their ability to threaten U.S. interests. No wonder, then, that Poe’s statement echoes a growing concern in Washington.

Three specific laws of the United States kick in, triggering punitive measures whenever Congress approves a bill like the Pakistan State Sponsor of Terrorism Designation Act and the secretary of state makes a final determination. The Export Administration Act, Arms Control Act and Foreign Assistance Act are the instruments used against a country designated a state sponsor of terrorism. Together, the resulting four categories of sanctions from designation under these laws comprise restrictions on U.S. foreign assistance, a ban on defense exports and sales, some specific controls over exports of dual-use equipment, and a variety of financial and other restrictions.

These powers give real teeth to the American action of designating a country as a state sponsor of terrorism. Although China appears to have gained strong influence on the ways in which Pakistan reacts to U.S. antiterror strategy, this designation will make a raft of punitive measures available to the United States. The calls for using these measures are likely to become persistent and grow louder as Americans confront the threat of terrorism at regular intervals, as almost every trail of terrorist attack at home leads them to Pakistan.