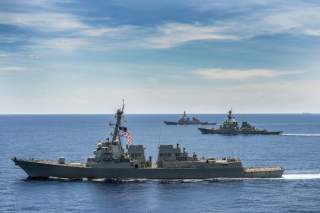 Ahead of the looming International Tribunal ruling on the Philippine-initiated arbitration case against China’s contested maritime sovereignty claims in the South China Sea (SCS), Chinese diplomats and government officials are conducting an aggressive PR campaign throughout the region and across the globe to influence world opinion and present China and its legal and political positions as correct, through the publication of various comments by sympathetic world leaders, legal scholars and international relations experts. They want to highlight the positive aspects of Beijing’s maritime security comportment and accentuate the benevolent features of its growing presence in the SCS, while peddling the same familiar public-diplomacy themes—the United States as the destabilizing aggressor; China as the virtuous but hapless victim; and the source of all regional trouble as Washington’s arm-twisting of its allies and partners in Manila, Hanoi and Kuala Lumpur—and steadily messaging that it does not recognize the jurisdiction and authority of the International Tribunal of the Permanent Court of Arbitration (PCA) at the Hague to rule in this case. All in all, this PR shift may be part of a larger adjustment by Beijing of its assertive actions in the SCS in response to the mounting unfavorable geopolitical conditions and regional trends. If so, what does the PR shift reveal about Beijing’s maritime strategy, and more importantly, what can Washington do to shape and influence that evolving strategy?

Why the PR Shift?

There are three possible motives why China may have taken a more forceful PR posture. First and foremost, anticipating an unfavorable PCA merits ruling, Beijing wants to occupy the moral high ground in support of its public-diplomacy stance, while portraying Washington as the destabilizing aggressor to uphold its maritime sovereignty claims, preserve its strategic positions and mitigate impact to its national interests.

Second, China has certainly taken notice that its unilateralism the past few years has alarmed its neighbors (and fellow SCS claimants) and driven them in varying degrees toward the United States, undermining its ultimate goal of regional preeminence (and possibly global primacy). Hence, President Xi Jinping is now touting a new kinder, gentler and more tolerant foreign policy toward China’s neighboring countries. He apparently wants cooperative international relations, a network of global partners, and a regional security outlook characterized by “consultation, common construction, sharing, and a security governance model with Asian features” to counter the United States’ rebalance to the region.

Third, Beijing may have made the rational calculation that it has already achieved significant gains and that for now, it needs to simply exercise strategic patience to consolidate those gains. China’s land reclamation and militarization of its various geographic features have given it the capability and capacity to monitor and control much of the SCS. Thus, while China occupies a position of regional advantage and strength, it must take care not to risk its advances through needless acts of aggression. Otherwise, it invites the erosion of its strategic positions and further delays in its strategic timetables. All Beijing really needs to do is to sustain discrete and steady assertiveness through words, in order to safeguard its strategic interests without indulging in overreaching actions that could encourage stronger responses by Washington and its allies and partners in the region and/or collective actions by the other SCS claimants.

What Do Recent SCS Moves Reveal about China’s Maritime Strategy?

As tensions ebb and flow in the SCS, China has kept its eye on the bigger picture: developing comprehensive maritime power. In early March, Beijing ratified an outline of its thirteenth Five-Year Plan (2016–20). This was Xi Jinping’s first major influence on the direction of China’s national strategy, and maritime issues featured prominently therein. This was also another substantive glimpse of what an emerging Chinese maritime strategy may look like.

Beijing Sees Beyond the SCS. China’s activities in the SCS are driven by its strategic vision of the ocean as “blue economic space and blue territory” crucial for China’s development and security. The SCS is the current hotspot—the crisis du jour—but Beijing’s focus will undoubtedly shift in the future. Next may be a return to the East China Sea in search of new gains, into the Indian Ocean or even into the Arctic. Indeed, tensions appear to be rising again in the East China Sea, as evidenced by China’s growing agitation with and distrust of newly elected Taiwanese president Tsai Ing-wen, and its provocative maritime incursions into Japanese-claimed territorial waters around the Senkaku Islands.

Beijing’s Long Game. China’s maritime vision is long-term and involves the whole of government. The current five-year plan gives high visibility to maritime issues, a leadership signal noted by Chinese strategists and planners. Beijing is telegraphing, both inside and outside of China, with its public statements and calibrated actions in the SCS that the strategic priority given to maritime issues—a key enabler of Chinese development—is rising. Beijing is also building up its nascent global network of partnerships with like-minded nations by the convenient exploitation of the SCS sovereignty issue. Some nations actually agree with Beijing’s sovereignty perspectives, and are easily swayed by Chinese criticism of U.S. imperialism, unilateralism and hypocrisy. They warn that if China loses in East Asia, it will strengthen the United States’ global preeminence to dictate the world order on American terms and enable the continuation of a U.S.-led security and economic structure that has persisted since the end of World War II.

Creation of New Chinese Domestic Maritime Laws. China feels disadvantaged by the Western-dominated system of international maritime law enforcement, which was formed when it was weak as a nation. Last March, Beijing announced its intent to create new domestic maritime laws in support of its maritime strategy, part of a continuing effort to set the terms for international legal disputes it expects will grow as China’s maritime reach expands. This legal campaign, paired with targeted growth in enforcement (and security) capabilities and capacities, will pose new challenges for Washington—particularly in the SCS, where Beijing has the advantage in maritime presence (white and grey hulls, fishing fleet, and now bases) and growing anti-access/area denial and power-projection capabilities.

What Can the United States Do to Counter China’s Strategy?

So how does Washington responds to Beijing’s evolving maritime strategy? For now:

Question Beijing’s Maritime Vision. Avoid responding to individual Chinese moves in the maritime domain without framing them within China’s broader strategic interests and ambitions. Beijing’s actions are part of a wider Chinese maritime strategy to develop itself into a great maritime power, including an expansive geographic notion of blue territory. Ask them to define these terms. Ambiguity, often held up as strategically artful, may actually be counterproductive in this case. The unintended consequences of such political flexibility might be Beijing’s misinterpretation of the intended strategic messaging, and subsequent miscalculation.

Make the Maritime Domain a Primary Focus. U.S. efforts are most effective when Beijing senses it is the odd one out on the global stage. Leverage American strengths—political, economic and security networks of allies and partners—to build a global framework that addresses China’s maritime expansion and incorporates all elements of national power (diplomatic, information, military and economic). Enhance and sustain the rebalance to the Indo-Asia-Pacific, an amalgamation of integrated soft and hard deterrent powers (multilateral diplomacy, economic engagement and military presence), to reassure allies and partners, demonstrate U.S. resolve and commitment, strengthen U.S. military posture, uphold international norms and rule of law, and, most importantly, guarantee the freedom of the seas for all as a net provider of maritime security. The latter is a precondition for international trade, economic development and global prosperity, underwritten by naval power and ensuring the free flow of maritime commerce.

Challenge New Chinese Domestic Maritime Laws and Chinese Narratives. Raise questions now on Beijing’s intent to draft new domestic maritime laws to support its concepts of blue territory and blue economic space. Chinese laws are political by nature, and the transitory window of opportunity for shaping them closes after publication. No pushback means tacit acceptance. Additionally, do not let Beijing characterize and define U.S. actions unchallenged. Address China’s public diplomacy point-for-point, and reiterate U.S. positions to unambiguously convey the United States’ national interests and shape the space for a diplomatic process to emerge following the tribunal’s decision: (1) the United States is not a party to the ongoing arbitration case between the Philippines and China, and does not take a position on the merits of the case; (2) the United States supports the peaceful resolution of maritime disputes and the need for all countries to comply with their obligations under international law; (3) the United States takes no position on the competing maritime sovereignty claims to naturally formed geographic features in the SCS; (4) the United States takes a strong position on protecting the rights, freedoms and lawful uses of the sea and airspace guaranteed to all countries, including that maritime sovereignty claims must comply with international law as reflected in the United Nations Convention on the Law of the Sea.

At the end of the day, there is a fleeting strategic opportunity for Washington to shape and influence Beijing’s developing maritime strategy and nudge China toward being a more responsible global stakeholder and net provider of maritime security that contributes positively to the international system. Otherwise, silence and inaction imply acknowledgment and consent to Beijing to execute its maritime strategy on its own terms, unchallenged. Better to reframe the strategic landscape now than to accept a fait accompli later. The high stakes are continued U.S. preeminence in the Indo-Asia-Pacific.