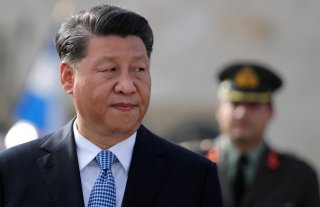 News that China and Iran are nearing a twenty-five-year cooperation agreement has sparked concern about a growing alignment between two U.S. rivals. New York Times reporters Farnaz Fassihi and Steven Lee Myers disclosed details on the purported agreement claimed that it would “extend China’s influence in the Middle East, throwing Iran an economic lifeline and creating new flashpoints with the United States.” Those concerns seem overstated. The leaked text is apparently long on vision statements and short on actual commitments by either side. Both countries remain deeply wary about over-reliance on the other and have incentives to maximize their flexibility. Nevertheless, while the threat of a Sino-Iranian axis remains low, closer cooperation could still result in a stronger Iranian military and greater Chinese military and intelligence presence in the region. Those challenges, which are alluded to but not specified in the reported agreement, constitute the more difficult problems that will need to be addressed in the next few years.

In January 2016, the two countries agreed to pursue a twenty-five-year “comprehensive cooperation agreement” as part of their new “comprehensive strategic partnership.” The eighteen-page leaked document indicates that the two sides are nearing completion on such an agreement—neither side has disputed its authenticity—although the final version could differ. The agreement anticipates that the two sides will continue or expand cooperation in six major areas, including Chinese investments and purchase of Iranian oil and natural gas, infrastructure (including Chinese assistance developing the Chabahar and Bandar-e-abbas ports), technology (including 5G and artificial intelligence), banking and trade, defense (focusing on counter-terrorism), and coordination in multilateral institutions.

There are good reasons why China and Iran would want to cooperate in these areas. The two economies are complementary: China is the world’s largest oil importer and Iran is looking for purchasers willing to defy U.S. sanctions; Iran needs modernized infrastructure in areas such as rail and 5G networks, where Chinese firms have strengths. Beijing has also identified Iran as a link along the Belt and Road Initiative, connecting Xinjiang with the Middle East. Strategically, both states are motivated by a common perception of Washington as an adversary and concerns about U.S. military interventionism. Iran seeks Chinese weapons and expertise to expand its military influence in the region, while China is looking to cultivate Iran as a lucrative arms market and a strategic bulwark that ties up U.S. forces outside of Asia.

Cooperation was previously constrained by China’s opposition to Iran’s illicit uranium enrichment program and desire to avoid dealing directly with a pariah state, but the 2015 Joint Comprehensive Plan of Action which imposed constraints on Iran’s nuclear program reduced both concerns. Only a week after that deal went into effect, Chinese president Xi Jinping visited Tehran and signed the “comprehensive strategic partnership.” Since then, the two countries have built relations in multiple areas. This includes Chinese financing for Iranian rail projects, China’s emergence as Iran’s largest oil purchaser, and meetings between high-level officials. Military ties, which flourished in the 1980s when China became Iran’s largest arms supplier, have also started to re-emerge. In December 2019, Chinese, Iranian, and Russian naval ships carried out a drill in the Gulf of Oman, highlighting what some analysts described as a strategic alignment between the three countries.

The leaked agreement appears to summarize this pre-existing cooperation and offers broad brush strokes for how the partnership could evolve in the future. Nevertheless, the details—or lack thereof—in the agreement suggest the limits of the partnership. Iranian analysts who have scoured the Farsi text report that it contains no precise investment or trade targets. China did not commit to purchase a specific amount of oil, but would “become a regular importer.” There is no mention of previous Iranian claims that China would invest up to $400 billion in return for steep discounts in Iranian oil. Rumors that China would base up to five thousand troops to protect those investments, or that Iran would sell China the strategically located Kish Island, are not supported by the text.

Both sides have reasons to keep agreements as vague as possible. China has long tried to balance Sino-Iranian relations with its competing interests in the Gulf. Saudi Arabia remains a far more important oil supplier for China ($40 billion in sales versus $7 billion in 2019). While the purported Iran deal has made headlines, Beijing has been working simultaneously to enhance its “comprehensive strategic partnerships” with Riyadh and the UAE, in addition to “strategic partnerships” with Kuwait, Qatar, and Oman. The Gulf states have also been important diplomatic partners for China, taking common positions on issues ranging from Xinjiang to Hong Kong. Beijing would have little appetite to antagonize those countries by upgrading ties with Iran at their expense.

The U.S. factor also influences China’s calculations. During the 1990s, U.S. pressure led China to curtail nuclear and ballistic missile cooperation with Iran. U.S. leverage today is weaker but the threat of sanctions still discourages trade and investments by China’s major state-owned and private enterprises. Those constraints increased with the U.S. withdrawal from the Iran nuclear deal in May 2018 and heightened U.S. sanctions (although Washington lifted sanctions against one Chinese firm to make progress on a bilateral trade deal). The effects have been significant. Even before the coronavirus weakened demand, Chinese oil purchases in mid-2019 were down 60 percent from the previous year and a Chinese firm pulled out of a $5 billion deal to develop the South Pars natural gas field. Beijing wants access to Iranian oil and markets but is not prepared to make commitments that might completely cut off its access to the much larger U.S. economy.

Iran has its own reasons to hedge. While Iran’s supreme leader has signaled his support for the agreement, virtually guaranteeing its approval in the parliament, many remain skeptical about its potential benefits. One concern relates to the history of failed business deals between the two countries: as one parliamentarian noted on Twitter that, “Somebody should ask the other party to our 25-year pact why doesn't it pay its debts to us?" As in many other countries, some are also wary of falling into a Chinese debt trap. Those fears are exacerbated by rumors, apparently circulated by Iranian opposition figures, which suggest that Iranian territory could be sold to China. Iran’s leadership thus has incentives to keep commitments to China ambiguous.

None of this, however, implies that Washington should dismiss the twenty-five-year agreement as empty rhetoric. Ambiguity can have benefits: both Beijing and Tehran can leverage the prospects of deeper bilateral cooperation to generate leverage with foreign leaders. With a future U.S. administration more open to negotiations, Iran could signal that it will avoid granting China base access or intelligence cooperation in return for sanctions relief. Just as Beijing curtailed military cooperation with Iran to improve ties with Washington in the 1990s, China could promise to “exercise restraint” in implementing a new accord with Iran if progress can be made in protecting Chinese interests on other issues.

Regardless of what appears on paper, several aspects of Sino-Iranian cooperation could pose problems for the United States. First, are the continued illicit Chinese oil transfers (some of which reportedly involve ships turning off their transponders to avoid detection), which provide cash for Tehran. Second is Chinese investments in strategic ports. Iran’s welcoming of China to contribute to the development of Chabahar, and recent tensions that call India’s privileged status on that project into question could reduce New Delhi’s ability to serve as a regional counterweight and portend a larger Chinese naval presence in the region. Third, although China is unlikely to condone a full resumption of Iran’s nuclear weapons program, it could supply advanced conventional weapons to Iran once United Nations restrictions expire in October, following in Russia’s footsteps.

The United States will have to employ carrots and sticks to curtail Sino-Iranian cooperation in the areas it cares about most. But an effective U.S. strategy should start with a clear understanding of the inherent limits of the partnership. Mutual wariness and differing interests, as reflected in the lack of firm commitments in the leaked agreement, should reduce U.S. fears of a lasting strategic alignment and help undercut any attempts to use expanded cooperation as leverage.

Joel Wuthnow is a senior research fellow in the Center for the Study of Chinese Military Affairs (CSCMA) at the National Defense University.

Phillip C. Saunders is the director of CSCMA.

This piece reflects only their personal views and not those of NDU, the Department of Defense, or the U.S. government.