America Has Failed Its Goal of Rebuilding Afghanistan 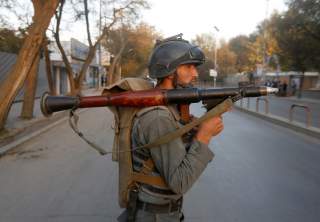 Since the NATO-led International Security Assistance Force (ISAF) was established in December 2001, there have been fifteen U.S. and alliance commanders tasked with leading the mission in Afghanistan. The paradigm in Afghanistan has largely been the same over those many years: at first, destroy Al Qaeda’s leadership and terrorist infrastructure for their attacks on 9/11; then, nation-build to create from scratch an Afghan political system that will gain the confidence of the Afghan people; and train, advise, and equip the Afghan National Security Forces so, eventually, Kabul will have the capacity to secure the country so it never again becomes a transnational jihadist base for launching terror attacks—an objective so tainted by fairy-dust that one wonders why U.S. officials across the national security bureaucracy continue to ritualistically recite it.

Those noble goals have clearly failed.

Even Ret. Gen. Stanley McChrystal, arguably the most (overly) optimistic general to have commanded the war effort, admitted in a recent Foreign Affairs essay that, “Today, Afghanistan is struggling to survive” and that, “Whatever progress the United States has made after 16 years, it is inarguably incomplete.”

The question that has consistently boggled the minds of U.S. policymakers and war planners across three presidencies is what the United States could possibly do to mitigate the trouble Afghanistan is in. U.S. politicians, lawmakers, war planners, and diplomats have been spending endless amounts of time searching in vain for the magic formula to “fix” a broken and dysfunctional country like Afghanistan. The sad irony is that this is the entirely wrong question to ask. Not once has a senior official with influence in the policymaking process stepped back, looked at the grander picture, and asked the far more elementary but crucial question: To what extend does the political disposition of Afghanistan matter to U.S. national security?

When the foreign policy establishment is pressed for an answer, it reverts to the well-worn talking point that a democratically elected, pro-America, and credible government supported by the Afghan people is the only remedy to prevent Afghanistan from reverting back to the terrorist safe-haven it was in the pre-9/11 era. If the Afghan government cannot provide for its citizens, the script reads, then the Afghan people will have no reason not to begin cooperating with groups like the Taliban. Leaving aside the fact that the Taliban is a permanent fixture in the country (after sixteen years of military efforts, it’s as strong as it’s been since 2001), Afghanistan is already a country where terrorist groups fundraise and operate. Of the ninety-eight U.S.-designated terrorist organizations in the world today, at least twenty (20.4 percent) make the Afghan-Pakistani border region their home. To think that these groups will die out simply depending on the system of government Afghanistan settles into is to misunderstand how easy it is for terrorist groups to survive—these are the same groups that have followers throughout the world, including in Europe and the United States.

The latest iteration of the U.S. strategy for the war still rests on another unfounded assumption: The political future of Afghanistan will determine whether the United States is or is not safe from international terrorism.

Afghanistan is held up as a unique place with respect to the terrorism problem because it is where Osama bin Laden’s Al Qaeda recruited and trained during the worst terrorist attack in American history. But yet again, blunt, honest truth is being obscured—ultimately, there is nothing unique about Afghanistan as a terrorist safe-haven. The mountains and caves of Nangahar province and the poppy fields of Helmand are literally just two of dozens of places around the world today that the State Department classifies as terrorist safe-havens. Ayman al-Zawahiri and Abu Bakr al-Baghdadi do not need Afghanistan to keep their followers in the terrorism business, nor will the United States extinguish the threat of international terrorism by pacifying a country in the middle of Central Asia that has continuously been at war for over forty years.

Terrorism will remain a disturbing challenge in the global landscape regardless of which warlord is ruling the roost in Afghanistan or which Pashtun happens to be residing in the presidential palace. This is an uncomfortable but inescapable fact that Washington chooses to ignore, does not understand or is unwilling to accept. The result of this neglect or incompetence has been the continuation of a misguided counterterrorism policy that is inappropriately centered on Afghanistan’s future as the final judgment of whether Americans are secure from acts of politically motivated violence.

This was why many of us were disappointed when President Donald Trump unrolled his administration’s new Afghanistan policy. Despite Trump’s realization during the presidential campaign that U.S. investment in blood and treasure has not produced the security gains that the American people were promised by their foreign policy elites, he has chosen to adopt the same flawed assumptions about Afghanistan’s supposed indispensability as his predecessors.

Sixteen years of war in the Afghan countryside has exposed how hollow and bankrupt U.S. policy is. It’s never too late for the foreign policy officials to sober up and change course. But it’s inconceivable if Washington is unwilling to deal with the cold-blooded reality in front of them.