America Has a Moral Obligation to Afghanistan’s Military Women 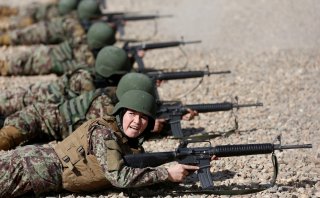 On August 15, 2021, the Taliban took control of Afghanistan once again. In the previous twenty years, the United States and NATO countries promoted women’s rights, equality, and justice in Afghanistan. As part of those efforts, they provided opportunities for women to voluntarily serve in the Afghan military. This service has traditionally been subject to male domination in Afghanistan. Despite cultural difficulties, the United States and its allies trained a cadre of Afghan women in the military to do jobs that typically hadn’t been open to them. They served in U.S.-backed combat units, handled the cases of Taliban prisoners, and a small number of them even flew helicopters and military planes. Before the fall of Afghanistan to the Taliban, over 6,300 women served in the Afghan army, police, and air force.

These women did not just serve in the military and fight the Taliban, they also promoted democracy, equality, and justice as part of the transformation of Afghanistan. The international community, especially the United States, purposefully encouraged and supported women in the military as part of the broader transformation to a more democratic, just, and equal Afghanistan. Because these programs directly and symbolically put these women at war with the Taliban and what it stood for, the United States has incurred a moral obligation not to abandon them in the face of the Taliban resurgence. These women would likely face Taliban retribution and possibly death. The most straightforward way for the United States to meet its moral obligation is to grant those women U.S. visas and support their safe evacuation from Afghanistan.

From 1996 to 2001, the Taliban ruled Afghanistan until they were removed during the United States’ invasion. The Taliban ruled Afghanistan according to their extremist interpretation of Islamic Sharia Law, which, among other restrictions, banned girls from school and prevented women from serving in the government or military. The Taliban’s leadership would not allow women to serve in their regime because they “publicly humiliated and beat women if they didn’t comply [with their will]” during their rule. The best solution to potential Taliban brutality against those women is to get them out of Afghanistan.

The United States must evacuate these women because their lives are in great danger. Afghan women who served in the military fought the Taliban in both the land and the air domains. The majority of the 6,300 women in the Afghan National Army fought on the ground, but around 146 women served in the Afghan air force, flying combat and logistics aircraft. Several also served in the police, interrogating Taliban fighters at the Bagram military base and other prisons around Afghanistan. Some of the Taliban fighters interrogated by women police were freed from Afghan prisons under the peace agreement signed by the Taliban and the United States in in February 2020 in Doha. Those released Taliban prisoners actively participated in the recent fight against the Afghan government. Therefore, the work that these women did as army ground forces, as pilots, and as police interrogators put them at risk of being identified and executed by the Taliban.

Moreover, these women risked their lives to protect the United States, its allies, and the Afghan government’s interests in promoting values such as democracy, equality, and justice as part of Afghanistan’s transformation toward a democratic country. They were perfect examples of those values. For example, my work at the Office of National Security Council in the Presidential Palace in Afghanistan required me to read, analyze, and report on all of the U.S. reports on Afghanistan to the national security advisor and the president of Afghanistan. During my two-and-a-half-year tenure, I never saw a single report in which these women were not mentioned as a sign of progress in promoting democracy, justice, and equality. Moreover, many intellectuals, journalists, think tank experts, and other people involved in women’s rights in Afghanistan have claimed that the participation of Afghan women in the military was a positive sign in promoting these important values.

The values that the Afghan military women fought for are contrary to the Taliban way of life and its extremely conservative interpretation of Sharia Law, the Taliban’s code of conduct. Those values are also against those held by the people who supported the Taliban for twenty years and contributed to overthrowing the Afghan government. These women have no room to live in societies under the Taliban’s control. If they somehow survive the Taliban’s brutality, they will be subjected to forced marriages—despite the recently decreed ban—rapes, and their families will face social isolation and extreme poverty.

The United States and its allies must act quickly to save these women’s lives or else they will be abandoned to suffer the Taliban’s brutality and eventually die in poverty. Allowing this to happen to Afghan military women will make future gender promotion in Afghanistan impossible. Some experts may argue that the Taliban will allow women to serve their regime to leverage and influence the international community. In pure Islamic governance, governance that the Taliban have fought for, it is against Sharia law to have women serve in the military. Prime examples of this fact are found in Saudi Arabia and Iran, where women cannot fully participate in the military. Furthermore, most Afghans who supported the Taliban view women’s service in the military, an environment of mixed genders, contrary to their values and way of life. Given the limited foreign aid the Taliban will receive from foreign countries compared to previous governments, and given the growing workforce in Afghanistan, it seems impossible for these women to find proper jobs and sustain themselves and their families in a male-dominated country.

The lives of more than 6,300 Afghan women who served in the Afghan military are at risk. They will potentially face the wrath of the Taliban, which could include brutality and killing. The Afghan military women put their lives in harm’s way fighting the Taliban and sacrificed to promote democracy, equality, and justice. They are now facing a great struggle for their lives under the Taliban’s brutality in Afghanistan. Therefore, the international community, particularly the United States, has a moral obligation to grant them visas and support their safe evacuation from Afghanistan.

Abdul Rahman Rahmani is a former colonel, Afghan pilot, and head of Presidential Information Coordination Center at the Office of National Security Council in Afghanistan. He is currently studying at National Defense University in Washington DC.