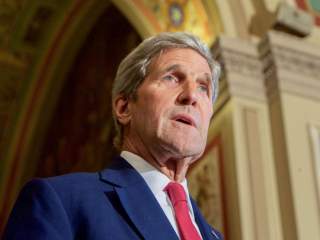 On February 2, Secretary of State John Kerry described the Islamic State as “apostates”—a word with very clear theological implications. This administration has chosen its words about the group carefully, and in October it opted for “Daesh” (the Arabic acronym for “ISIS”) under the assumption that it insults the group and because, to use President Obama’s justification, “ISIL is not Islamic… and [is] certainly not a state.”

The words we use do indeed matter, but it is equally important to recognize that these words can sometimes matter even more to our enemies, and perhaps in undesirable ways. Whereas we see the term “apostate” as an insult, the Islamic State uses it to excommunicate other Muslims and make exclusive claims on legitimacy. The question of Muslims’ inclusion—specifically, whether one’s actions necessarily reflect one’s belief—has been the focus of much debate since the founding of Islam. Standing on the margins, and typically within specific political contexts, various groups took the view that any actions and statements a Muslim makes that contradict Islamic doctrine nullify that person’s status as a Muslim.

Today, it is this formula (as adapted by Sayyid Qutb in the 1960s) that jihadists apply to Muslims and Muslim-majority governments who do not subscribe to their worldview. This is one example of the historical and conceptual depth of the language of groups like IS, which identify with the early period of the religion’s history, when those terms were first put into use.

Enter the United States. Kerry’s word choice this week exemplifies what can go wrong when we try to speak a language we don’t understand: we needlessly enmesh ourselves in a nuanced theological debate—and not any obscure squabble, but a dispute that stands at the very center of the faith. Engaging in theological discussions is not necessarily a bad exercise. But if it is the U.S. government doing so, and if the task at hand is defeating the Islamic State, there are better and more constructive approaches, namely those that focus on the group’s methods and territorial expansion, rather than its terminology.

Just as we need to remind ourselves that we lack the voice and vocabulary to rhetorically challenge IS’s theology, we should remember that we have the tools to stop it from becoming a reality. As I have written elsewhere, it is not “countering” its theology or calling it by different names that should be our focus—indeed, doing either gives the group the attention it craves. Rather, we must more narrowly understand the ways in which it uses that theology to justify its actions.

Put differently, its vision for society is being validated every day by depicting Washington as betraying a region, especially the Middle East’s Sunnis, by colluding (directly or indirectly) with Shiite powers who exploit Sunnis in Syria and Iraq. In turn, so the ISIS narrative goes, the Sunni utopia they create is the necessary solution for this course of events. The solution for stopping this is not in the words we use, but in the actions we take.

Jacob Olidort, a Soref fellow at The Washington Institute for Near East Policy, focuses on the history and ideology of Salafism and Islamist political groups in the Middle East.