America Has a Perception Problem in the Indo-Pacific Region 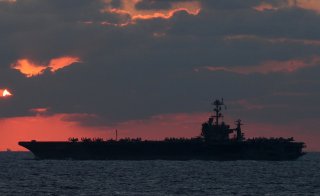 In the popular narrative of Chinese history, the Qing Dynasty ceded Hong Kong to Great Britain in the wake of the First Opium War (1839–42). It ushered in a century of humiliation in which China was picked apart and forced to make degrading concessions to foreign powers.

This historic event marked the most pivotal juncture of an epoch-making transformation in China. Today, the surrender of the strategically important territory once under the suzerainty or protection of a Western great power can have enormous implications on Beijing’s prestige and influence.

Likewise, if the United States proves unwilling or unable to prevent Taiwan from surrendering to China, it could well face its own American “century of humiliation.” In effect, it could mark the end of American supremacy and its capacity to project military power and democratic values beyond the Indo-Pacific region.

The Return of General MacArthur

It is in America’s best interests to defend Taiwan. In the wake of World War II, Army Gen. Douglas MacArthur said that the island of Taiwan is akin to an “unsinkable aircraft carrier.” Captured by China, it could pose an immediate threat to Okinawa and Guam and eventually push the U.S. Navy out of the Western Pacific. If China controls Taiwan in conjunction with controlling Sri Lanka—the other “unsinkable aircraft carrier” of the Indian Ocean where Beijing recently secured a ninety-nine-year lease of the Hambantota Port—then Beijing could become well-positioned to wrestle control of the whole Indo-Pacific region. This would effectively limit the U.S. power projection capacity not only in the Indo-Pacific region but also in the Atlantic and beyond.

Undoubtedly, the perception of American prestige and credibility seems to be in jeopardy. The global influence of the United States rests on the confidence of its allies and partners. Their trust in the United States retains only if Washington is willing to and capable of protecting those who share American values and democratic ideals. If Taiwan fell to China, regional allies such as Japan and South Korea could be dragged out of the American security umbrella in the Western Pacific. Moreover, the loss of American authority in the Indo-Pacific region would have global consequences—and they would be irreversible.

This loss would be solidified by China’s ability to reshape the international order by forming the bigger blocks of “client” or “vassal” states. As a result, laws unfriendly to Western interests and democratic values could be pushed through both by international organizations and individual countries—as it happened in the case of Sri Lanka and its Chinese-building Colombo Port City and the Lotus Tower. The U.S. leadership, based on the authority of liberal institutions and republican ideals, would decline or get replaced by regimes and systems considered by the democratic countries as oppressive.

The United States—and the West in general—must reconsider whether the strength of democratic nations’ resolve accords with the gravity of the stakes, which are now at play. Washington should then consider explicitly switching from the forty-two-year-old policy of “strategic ambiguity” to “strategic clarity” (i.e., unconditional commitment to defend Taiwan)—and doing so while the United States still retains regional supremacy. At the same time, there is a general perception that the U.S. military and economic power is declining. The cost of doing nothing means taxing American humiliation.

Indeed, the Biden White House is trying to change the perception of America’s relative decline. The Biden administration will soon need to begin: a) A process of preemptive rebalancing in the South and East China Seas, b) Shifting the modus operandi by intensifying engagement with partners and allies in Europe and Asia, and c) Pursuing strategic gains through adopting asymmetric measures like China does.

The Water and Rock Doctrine

Aside from these measures, the United States could seek to not only counter China but also learn from the Beijing strategy itself. The U.S. approach to great-power competition has always been the guns and butter—investing its massive economic surplus into dollar diplomacy and sustaining a formidable military. By contrast, Beijing’s strategy follows the Water and Rock Doctrine. This doctrine draws upon the idea—expounded in the Daoist classic, Daodejing, by Laozi—that water could flow around obstacles while retaining the power to erode and penetrate rock.

China’s approach means malleability—when the Communist Party of China faces determined pushback, it retreats and emerges elsewhere or at another opportune moment by taxing the resources and patience of its opponents. It can take the form of sharp incisions like the incremental occupation of islands in the South China Sea or the tidal wave of the massive maritime militia incursion into the Philippines’ Whitsun Reef. It can take the form of a slow drip-drip that erodes the resolve of its opponents—like constant Chinese military aircraft incursions into Taiwan’s airspace.

China has a geographic advantage. Beijing has taken the initiative to set the parameters of the gray-zone warfare that is now prosecuting across the Taiwan Strait and elsewhere in the Indo-Pacific region. Since the only valid response is kinetic warfare, the West would perhaps do well to spend less time bashing China’s methods and more time studying them. The reality is that the shift from a unipolar to a bipolar Pacific region—which involves a rival with far more economic power than the former Soviet Union ever had—means the “vassal states” of China will take the opportunity to redraw the terms of their relationships with the United States and other democracies.

As the American guns and butter advantage erodes, the United States and its allies will need to better leverage and coordinate their “soft power” as well as their diplomatic, economic, information, and intellectual resources. President Joe Biden’s success in reaching the consensus with the other Quad nations—Australia, India, and Japan—is proof that his strategy is beginning to take shape and pay dividends. Signaling the priorities, the first foreign head of state invited by the Biden White House was the prime minister of Japan, followed by the president of South Korea. The United States and its allies and partners will still have plenty of learning and catching up to do while mastering the Water and Rock Doctrine of China.

Patrick Mendis, a former American diplomat and military professor, is a distinguished visiting professor of culture and diplomacy at the Chinese Culture University in Taiwan.

Corey Lee Bell, a postdoctoral researcher in Taiwan, has a PhD from Melbourne University’s Asia Institute and is a former editor of Taiwan Insight.