America Has Turned a Blind Eye to the Taliban's Territorial Gains 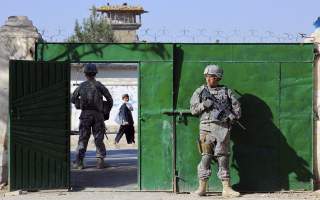 Ken Burns and Lynn Novick’s Vietnam War, a ten-part volume diving into one of the most unpopular wars in American history, won plaudits from a lot of historians and film critics. The documentary was a modern-day investigation across multiple domains of the conflict, from the normal soldier from Missouri who enlisted in the military to the anti-war protester who campaigned to end America’s involvement.

But it was a remarkable piece of work for another reason as well: Burns and Novick’s film successfully juxtaposed the real hell the men fighting on the ground went through on a daily basis from the optimistic—and one could say misleading—assessments that the U.S. military high command reported to the American people. Oftentimes it was as if the politicians selling the war in Washington and the generals in Military Assistance Command-Vietnam headquarters were living in an altogether different universe from the grunts, captains and lieutenants who were risking their lives (and dying) in the jungles of Southeast Asia. Indeed, when Gen. William Westmoreland spoke to the National Press Club in November 1967, he talked about a war that was slowly but surely going America’s way. The Vietcong were getting pummeled by U.S. and South Vietnamese operations; the Soviet Vietnamese were fielding a more dedicated army; and the enemy was losing the battle of attrition. Westmoreland would predict that the conflict has reached a point “where the end begins to come into view.”

History, of course, proved Westmoreland wrong. About two months later, the Vietcong launched a major offensive across South Vietnam’s provincial capitals during the Tet holiday, causing chaos in Saigon and revealing to the American public just how wrong the commanders, the Pentagon, and the White House were.

Fifty years later, we have a similar gap in Afghanistan between the rosy assessments offered by U.S. commanders and the media reports that have trickled out of the country showing violence and hopelessness in the capital city, free reign for the Taliban in about 44 percent of the country’s districts, and a national unity government that is neither unified nor particularly nationalistic. It’s almost like Americans are reliving the history of the mid to late 1960s, when thousands of Americans were being sent to a theater to combat an enemy that had the advantage of fighting on home turf. The only notable differences between America’s experience in Vietnam and its current experience in Afghanistan (for non-historians at least) is the length of time U.S. soldiers have been engaged, the political and religious character of the enemy, and the country where the fighting is taking place.

Ask a senior administration official, a public affairs spokesman for the U.S./NATO coalition, or the generals executing the war plan how Afghanistan is going, and you won’t be surprised with the answer: things are going well. Probed on whether Afghanistan was moving in the right direction, commanding Gen. John Nicholson replied in the affirmative. In fact, he sounded eerily similar to Westmoreland in 1967: “I think the conditions are set for success. President Ghani has said he believes we are turning a corner, and I agree.” Secretary of State Rex Tillerson used less gung-ho language, but his opinion on the Trump administration’s South Asia policy was largely the same. “We believe that we can turn the tide of what has been a losing battle over the last year and a half or so,” Tillerson told reporters last August, “and at least stabilize the situation and hopefully start seeing some battlefield victories.”

There is no room for negativity in the ranks. Brig. Gen. Robert Turner, who commanded Marines in Helmand Province, remarked that the Afghan security forces were growing more confident against the Taliban and more capable in capturing and holding terrain. Americans have heard this all before; in the same districts eight years prior during the U.S. troop surge, Gen. Stanley McChrystal frequently described the strategy as a work in progress that was nevertheless killing a lot of Taliban and driving the insurgents away from the population centers and the sources of revenue. With time, patience, and a conditions-based commitment, the American people were told Afghanistan could be salvaged.

McChrystal, like his predecessors, turned out to be wrong. You can kill a lot of insurgents, defend a lot of people and build a lot of dams, but if the enemy can cross a neighboring border and wait it out until the next fighting season, there is only so much the U.S. military can do.

Look at today’s news reports and assessments from the Special Inspector General for Afghanistan Reconstruction, however, and one questions what figures the Nicholson and the rest of his commanders are looking at. At the same time as the U.S.-led coalition brags about how the Taliban was unable to succeed in its wartime objectives last year, anonymous defense officials provide estimates showing a movement increasing in manpower. In 2014, there were roughly twenty thousand Taliban fighters. Now, there could be more than sixty thousand.

The BBC, meanwhile, just completed a months-long investigation, with reporters scouring every corner of the country. The top finding: the Taliban are active in 70 percent of Afghanistan’s districts. “About 15 million people—half the population—are living in areas that are either controlled by the Taliban or where the Taliban are openly present and regularly mount attacks,” the BBC noted. The coalition has taken issue with the BBC’s numbers, arguing that the Taliban have been under such pressure from U.S. airstrikes that they largely have to make due with launching attacks in the countryside.

Except it’s not just the countryside—it’s the cities too. In Kabul, the home of Afghanistan’s government ministries, financial institutions, army headquarters, the presidential palace, international NGO’s and embassies, hundreds of Afghans have been killed in suicide attacks over the previous year, all of them more brazen than the next. Last May, Afghans experienced their deadliest suicide bombing ever when a water truck exploded in Kabul’s diplomatic quarter, killing at least 150 people. In a short two-week span in January, three separate attacks—including a fifteen-hour siege of Kabul’s most famous international hotel—killed 128. Kabul residents now call the capital a “war zone”—all of this after sixteen years, $74 billion in U.S. taxpayer funding for the Afghan security forces, and hundreds of billions of additional dollars on institution building, budget support, loans, reconstruction, counternarcotics and counterterrorism payments to Pakistan.

Someday, twenty or thirty years in the future, another award-winning filmmaker will follow in Ken Burns footsteps and shoot a documentary investigating how and why the United States spent over a decade and a half trying and failing in Afghanistan. Don’t be surprised if the testimonials, interviews, and conclusions of the two documentaries are nearly identical.