Is America Headed toward War with North Korea? 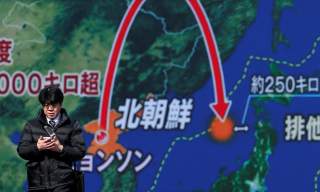 After the 2016 election, President Barack Obama told President-elect Donald Trump that North Korea would be his biggest foreign policy challenge.

The warning has proved prescient. Though Trump, as a candidate and president, has been more open than many top U.S. politicians to direct talks with the North Korean leadership, he has also ratcheted up the personal invective against leader Kim Jong-un to unprecedented levels, most notably calling him “Rocket Man” on the floor of the UN General Assembly.

Conversely, the North Koreans have kept up tests of their various missile and nuclear technologies at a savage pace in 2017, to the near-universal opprobrium of the global community.

Quiet discussions in Washington—at think tanks, in the halls of Congress, at the State and Defense Departments—speculate that 2018 could bring actual war, or the consideration of some sort of U.S.-led tactical strike. All indications are that the president will not accept North Korea as a nuclear power. In recent days, the North has complained that Seoul and Washington have brought the parties to the “brink of nuclear war” and said that Trump seems to be “begging for war.” But will conflict actually come in the new year?

Some are skeptical, including those in the orbit of former White House chief strategist Steve Bannon. Asked, “Do you think think there is a real chance we go to war or do some kind of strike on North Korean 2018?,” a source close to Bannon told me Tuesday morning, forthrightly—“No”—and noted the true focus lies elsewhere. We already “ARE at war with Iran throughout the Middle East,” the source wrote to me. Bannon’s former deputy at the White House was more equivocal, insisting the ball is in Pyongyang’s court. “Ask the NoKos. Up to them,” Sebastian Gorka e-mailed me.

Bannon is known as a skeptic of the North Korean issue as a whole, or at least as it pertains to U.S. interests, seeing the issue of a nuclear North Korea as a largely intractable and irrelevant sideshow. Iran, Qatar and ratcheting up pressure on China are far more in the “vital national interest” to focus on, when viewed through his “Jacksonian” foreign policy lense.

“There’s no military solution [to North Korea’s nuclear threats], forget it,” Bannon, in his waning days of formally being part of the administration, told Robert Kuttner, a co-editor of The American Prospect, a leading liberal publication, in August. “Until somebody solves the part of the equation that shows me that ten million people in Seoul don’t die in the first 30 minutes from conventional weapons, I don’t know what you’re talking about, there’s no military solution here, they got us.”

“I am (still) planning on attending the PyeongChang Olympics along with my family.”

“I would hesitate to ascribe a percentage factor,” Kuttner told me by email. “I do think the logic of deterrence and MAD militates against a nuclear exchange.” Kuttner has said he was “stunned” that Bannon dialed him up in August, and was a fan and follower of his work. Kuttner says that what makes military a exchange with North Korea most likely is “always the imponderable factor … our president's certifiable, impulsive lunacy.”

War with North Korea next year? Kuttner is not alone in foreign policy academia in his general skepticism.

“If pressed, I’d say 5 percent,” chance of a military conflict, Harvard’s Stephen Walt tells me by e-mail. “I am not especially worried about the Olympics [hosted by South Korea in February], although if I were North Korea and I wanted to do something dramatic elsewhere (e.g., an especially significant missile test), that would be a good time to do it.”

Others in the Korea realm agree.

“I am planning on attending the PyeongChang Olympics along with my family,” Tom Byrne, president of the Korea Society, told me Tuesday. “I see the status quo on the Korean peninsula prevailing through the Olympics and longer. . . . And if big data analysis has predictability, CSIS in DC finds that historically February is a time of year of low risk of North Korean provocations.”

He notes: “The US's policy is one of deterrence, as it has been since the Armistice was signed in 1953 . . . I believe that posture will be maintained into next year and beyond, even though continued development by the North in perfecting its ICBM threat makes the situation more dangerous.”

Deep Unease Among Some at the State and Defense Departments

But this relative optimism clashes intensely with an informal survey of my State and Defense Department sources.

“This time is worse” than any of the previous flare-ups with the North Korea, an advisor to the U.S. Navy tells me. This includes the events of the 1990’s which forced President Bill Clinton to the negotiating table, as well as the barbs of the 2000’s, namely President George W. Bush naming the country along with Iran and Saddam Hussein’s Iraq, as part of an “axis of evil.”

“I’m going to flat out say there’s a 40 percent chance of some sort U.S. military strike or outright war in 2018,” the advisor tells me. “Which is extremely, dangerously—insanely—high!”

“It feels like 50/50,” an advisor to the U.S. Army told me. “It will depend on if forces within the administration and the president decide they can live with a DPRK (North Korea) capable of hitting Washington.”

“2018 could very well be the year America and North Korea come to blows.”

Harry Kazianis, director of defense studies at the Center for the National Interest, is not one of the skeptics and agrees there is great cause for concern. “No matter how you slice it, 2018 could very well be the year America and North Korea come to blows—and millions of people could die as a result. This would be a war the likes of which we have not seen in decades—and if it goes nuclear, ever,” he tells me.

“I would say the chances of a war between the United States and its allies and North Korea is just below 50 percent,” he says, and echoing McMaster: “And growing ever worse by the day.”

A former State Department official gives me the highest percentage chance of any polled: “55 percent.”

Many around State, while hailing the work of North Korea point man Joe Yun, still complain that Secretary of State Rex Tillerson’s leadership is lagging. “The secretary seems to believe he can maintain America’s leadership position in the world with fewer resources and fewer personnel, particularly with fewer permanent ambassadors in vital posts around the world. He is profoundly mistaken,” former State Department spokesman P.J. Crowley tells me by e-mail. Nearly a year into the administration, Trump and Tillerson haven’t installed their own ambassador in Seoul, though Victor Cha of CSIS has been the rumored pick for several months. With the decision of the International Olympic Committee to ban Russia from the Olympics in South Korea, however, Moscow may feel compelled to support North Korea, thereby further raising tensions. The stakes for the Trump administration keep soaring higher.