America and Iran: Can the Nuclear Deal Lead to Rapprochement? 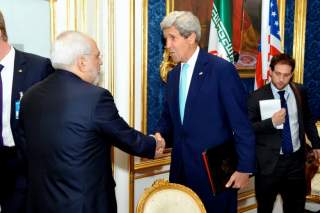 Considering how bad Iranian-American relations have been for so many years up until recently, it is remarkable that these two governments were able to reach a nuclear agreement at all. But can they now build upon this agreement to improve their relations more broadly?

There are significant obstacles to this. One, of course, is that there are influential forces at work in both countries that want to scuttle the nuclear deal altogether. But even if these do not succeed in blocking the deal, there are other important differences between the two countries over several issues, including ongoing regional conflicts, Iranian relations with Israel, Saudi Arabia and other Gulf Arab states, and human rights issues.

In his July 19 Washington Post op-ed piece, Fareed Zakaria observed that China and America were able to embark on rapprochement in 1971 despite important differences between them, including ongoing Chinese support for Vietnamese communists fighting American forces in Indochina and for the spread of Marxist revolution in general. Over the next seven years, though, Chinese foreign policy changed and Mao’s successor, Deng Xiaoping, “broke with Mao’s revolutionary worldview.” Zakaria argued that while Iranian support for revolution is unlikely to change in the next few months, greater Iranian contact with the rest of the world will also “empower those Iranians who see their country’s destiny as being part of the modern world, not in opposition to it.”

It is certainly possible that Iranian-American relations will follow the positive Sino-American model. But it is also possible that they will follow the negative one that the attempted Soviet-American rapprochement of the 1970s took. Back then, the United States and the USSR achieved a series of landmark nuclear arms control agreements. But also back then, Washington and Moscow backed opposite sides in several regional conflicts, including ones in the Middle East, Angola, the Horn of Africa, Cambodia, and Afghanistan. The 1979 Soviet invasion of Afghanistan resulted in the Carter Administration withdrawing the SALT II treaty from consideration for ratification by the Senate, which would have undoubtedly voted it down. A renewed Cold War then ensued which lasted until well after Gorbachev came to power.

What this 1970s-era Soviet-American case shows is that continued differences over regional security issues can halt progress toward rapprochement not just in in an overall bilateral relationship, but also in the nuclear arms control arena where progress has actually been made. This risk is present now: Iranian-American differences over regional issues could not only halt progress toward a broader Iranian-American rapprochement, but could serve to undermine the Iranian nuclear accord as well.

Still, there are two important differences between the 1970s-era Soviet-American and the current Iranian-American cases. In order to drum up American domestic support for strategic arms control, Nixon and Kissinger raised unrealistic expectations about how détente would lead to an overall improvement in Soviet-American relations, including with regard to conflict in the Third World. Moscow, by contrast, had a more realpolitik viewpoint: while the United States and the USSR cooperated on nuclear weapons where it was in their mutual interest to do so, Moscow foresaw that they would continue to compete in other areas, including the Third World, where their interests clashed.

In addition, while the United States and the USSR almost always had opposing interests in the many conflicts that took place in the Third World during the Cold War, this is not true for Iran and America now. Washington and Tehran are both supporting the Shi’a-led Baghdad government in its fight against the Sunni jihadist “Islamic State” (also known as ISIS and ISIL). Neither the United States nor Iran wishes to see the Taliban return to power (much less ISIS gain power) in Afghanistan. In Syria, of course, Iran supports the Assad regime while the United States opposes it. Both Washington and Tehran, though, oppose the rise of ISIS and other Sunni jihadists there.

The United States and Iran, however, differ sharply when it comes to other regional conflict situations (including Israel vs. Hamas, Israel vs. Hezbollah, the Houthis vs. Saudi-backed forces in Yemen, and Sunni-Shi’a conflict in Bahrain). The common Iranian-American interest in opposing ISIS and other Sunni jihadists, though, gives them far more basis for cooperating on regional conflicts than the United States and the USSR had in the 1970s.

There may, then, be a greater possibility now for Iranian-American détente regarding nuclear weapons surviving than the one that the 1970s-era Soviet-American strategic arms accords resulted in. But if Iranian-American relations are going to proceed to a broader rapprochement, then Washington and Tehran will need to come to some sort of understanding over regional conflicts too. And this will not be easy since resolving regional conflict necessarily involves more actors (namely, the parties to the disputes) than nuclear negotiations (which, despite the P5 + 1 format, were largely between the United States and Iran).

Common concern about ISIS and Sunni jihadists, as noted earlier, provides the basis for Iranian-American cooperation with regard to Iraq, Afghanistan, and possibly Syria (especially if the Assad regime falls). American diplomacy will also need to make a concerted effort to bring about a lessening of hostilities between Iran on the one hand and both Israel as well as Saudi Arabia and the Gulf Arabs on the other.