America Isn't on the Brink of Nuclear War—It Just Looks That Way. 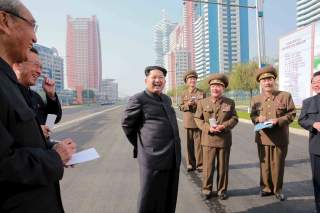 By declaring victory in his nuclear showdown with Washington and offering an olive branch to Seoul, North Korean leader Kim Jong-un may just have saved us all from nuclear war.

“We achieved the goal of completing our state nuclear force in 2017,” Kim claimed in a live TV broadcast as 2017 ended. “The United States can never fight a war against me and our state. It should properly know that the whole territory of the U.S. is within the range of our nuclear strike . . . This is just a reality, not a threat. . . . These weapons will be used only if our security is threatened.”

He also said that “the North and the South should no longer do anything that would aggravate the situation, and must exert efforts to ease military tensions and create a peaceful environment.”

Kim seems to have taken to heart the semi-serious proposal made a half century ago by Republican Sen. George Aiken of Vermont: to end the killing in Vietnam by announcing that the United States had won the war.

If President Johnson had listened, hundreds of thousands of lives would have been saved in Indochina. Today, at least that many lives are at stake in North Asia and the United States as the Trump administration threatens to attack North Korea to prevent it from making further progress on its nuclear weapons program.

“There easily could be a million deaths on the first day,” said Stanford University International Security Expert Scott Sagan.

By declaring his nuclear force completed, however, Kim can, without losing face, avoid conducting further missile tests that may trigger an all-out response from Washington. And by letting U.S. officials assert that his nuclear capabilities aren’t quite as great as he claims, Kim has given the United States the ability step back from the brink of war without losing credibility.

Most Americans are preoccupied with making a living, getting through the holidays, or tuning out all the noisy political debates in Washington. They have little appreciation that the Korean standoff may be the closest the United States has come to nuclear war since the Cuban Missile Crisis of 1962.

“We’re actually closer in my view, to a nuclear war with North Korea and in that region than we have ever been,” said Ret. Navy Adm. Michael Mullen, former chairman of the Joint Chiefs of Staff, only hours before Kim’s speech. Former CIA Director John Brennan said in October that the chances of war with North Korea were “too high,” as much as 1-in-4. Richard Haass, the president of the Council on Foreign Relations, has put those odds as high as 50/50.

And President Trump’s foreign-policy adviser and golfing buddy, South Carolina Republican Sen. Lindsey Graham, said recently that if North Korea conducts another nuclear bomb test, then the odds that “we use the military option” rise to “70 percent.”

Many other experts have also based their unnerving assessments on public declarations and private discussions with President Trump’s foreign-policy advisers, which all point in the same direction: the administration is seriously gearing up to launch a preemptive war against North Korea. Its aim is not to stop an imminent attack against the United States, but to prevent the possibility of North Korea launching a nuclear attack in the future—however improbable and suicidal that might be.

“Our president has been really clear about this,” said National Security Adviser H. R. McMaster, Trump’s national-security adviser, on Fox News. “He is not going to permit this rogue regime, Kim Jong-un, to threaten the United States with a nuclear weapon. And so he is willing to do anything necessary to prevent that from happening. . . . And so, all of our armed forces are getting to really a high, high degree of readiness for this mission.”

Trump himself, of course, warned a few months ago that he would meet any further North Korean threats to the United States “with fire and fury like the world has never seen.” Additionally, he said in a tweet that “military solutions are now fully in place, locked and loaded, should North Korea act unwisely.”

Trump seems to harbor the dangerous illusion that the military’s missile defenses will prevent North Korea from retaliating against the U.S. homeland if he orders such a “military solution.” He also appears to be unaware that North Korea could readily smuggle atomic bombs aboard container vessels into any large port in the United States and put at risk major U.S. cities—even without long-range missiles.

Trump’s confidant, Graham, insists that Trump isn’t bluffing about preparing an all-out strike against North Korea’s nuclear program. “He has told me that. I believe him,” Graham said. “If thousands die, they’re going to die over there. They’re not going to die here. And he has told me that to my face.”

On the other hand, even if Trump is bluffing, he runs the huge risk of having his bluff called by further North Korean nuclear or missile tests. With his credibility at stake, and his popularity waning, “you get even more reasons to believe the president won’t back away from a military strike,” warns Colin Kahl, former national-security advisor to Vice President Joe Biden.

A Way out of War

Meanwhile, the Trump administration can credibly claim that North Korea’s missile test didn’t quite demonstrate its operational capability to carry an intact nuclear warhead on a trajectory that could hit U.S. cities. Secretary of Defense James Mattis said in mid-December that while forensic experts are still analyzing the data, North Korea “has not yet shown to be a capable threat against us right now.”

In other words, President Trump doesn’t have to launch a war to demonstrate his credibility. He can boast about having the bigger button without having to use it.

As a result, doors may reopen, likely through South Korea and China, for confidence-building talks. These could include, as China has long urged, a freeze on further North Korean missile tests in exchange for a freeze on provocative U.S.-South Korean military exercises. Both measures would dramatically reduce the all-too-real threat of conflict igniting unintentionally through some kind of military blunder. The decision by President Trump and South Korean president Moon Jae-in to postpone military exercises until after the Winter Olympics mark a major first step in that direction.

The risks of war are still higher than they should be. But on the Korean Peninsula, at least, 2018 is off to a happy start.

Jonathan Marshall, an independent journalist and scholar, is author or coauthor of five books related to national security or international relations, including The Lebanese Connection: Corruption, Civil War, and the International Drug Traffic. His articles on Korea include “What’s Wrong with Talking to North Korea?” “Trump’s North Korea Delusions,” “Hurtling Toward Fire and Fury,” “Risk to US from War on North Korea,” “North Korea Fears ‘Regime Change’ Strike,” “The Negotiation Option With North Korea,” and “Behind the North Korean Nuke Crisis.”