America and Japan Must Team Up to Stop China 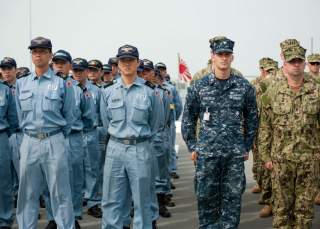 After a period of strategic drift, the U.S.-Japan alliance has been reconfirmed as the cornerstone of regional security under an Abe administration committed to moving Japan to the front of the global stage. This reinforcing of the alliance, exemplified by the revision of the U.S.-Japan Defense Guidelines, is boosted by an array of Japanese national-security reforms that include reinterpretation of the constitution to allow for collective self-defense and the removal of the longstanding arms-export ban. While such developments reflect the ideological bent of the Abe government, they are rooted in a competitive security environment and, in particular, the rise of China.

The challenge of China’s rise to Asia’s security has been most evident in the maritime sphere. Japan has had to bear much of the burden in responding to growing Chinese assertiveness in the East China Sea, culminating in Beijing’s declaration of an Air-Defense Identification Zone (ADIZ) over Japan’s territorial waters. Ultimately, however, the contest in the East China Sea has demonstrated the significance of Asia’s most important alliance, as exemplified by Beijing’s apparent moderation following President Obama’s commitment to defend the Senkaku Islands.

The relative deterrent success of the U.S.-Japan alliance in the East China Sea has, in relief, made clear the difficulty of arresting Chinese assertiveness in the more actively contested and less effectively defended South China Sea. Despite efforts by claimant states to utilize all of the national-security tools at their disposal, from increased defense spending to international arbitration, China’s regional rivals have not arrested Beijing’s efforts to turn Southeast Asian waters into a Chinese lake.

Although a Chinese victory in the South China Sea would be a clear existential threat to the claimant states, it is also a significant strategic threat to both the United States and Japan. Both states have demonstrated their recognition of this through words as well as actions, such as the United States’ freedom-of-navigation operations (FONOP) and Japanese military-exercise participation. And while U.S. involvement in the disputed waters is largely taken for granted given its status as the region’s principal security guarantor, there has been active speculation that a more liberated Japan might take on a bigger role in bolstering Southeast Asian maritime security.

In this regard, maritime security experts have called for Japan to join the U.S. FONOP effort. Ultimately, however, even with Asia’s most proficient native navy and loosened constitutional restraints, the involvement of Japan’s Self-Defense Forces in the South China Sea remains limited by already overstretched resources. Furthermore, many in the Japanese policy community believe that, “Actively challenging China’s questionable territorial claims in the South China Sea will likely cause an increase in aggressive Chinese naval activity against the Japan’s Senkaku Islands . . . and would thus prove counterproductive to Japan’s security interests.”

This does not mean, however, that Tokyo will, or should, be a bystander in addressing Asia’s most pressing problem. The best way that Tokyo can support the development of security in the volatile South China Sea is through capacity building. Such an effort responds to the Southeast Asian maritime states’ limitations in monitoring and defending their sovereign territory and exclusive economic zones.

Japan has already made a significant effort toward accomplishing this goal. In addition to engaging in exercises with regional states, Japan has established a Regional Cooperation Agreement on Combating Piracy and Armed Robbery against Ships in Asia (ReCAAP) to enhance regional antipiracy efforts and has taken a lead role in bringing regional coast guards together. Tokyo has also signed strategic partnership agreements with Indonesia, Malaysia, the Philippines and Vietnam, and agreed to provide patrol ships and aircraft to these nations as well. Furthermore, Japan is an active provider of strategic official development assistance (ODA) that links aid and security interests; Japanese funding for power grids, airports and port facilities has the potential to serve as dual economic and defense infrastructure, supplementing Japanese arms transfers, coordination and training for Southeast Asian maritime states.

Such activity buttresses the United States’ effort to foster regional security, including its own capacity-building endeavors. In this regard, it should be noted that despite developments such as the loosening of arms export restrictions on Vietnam and the negotiation of an Enhanced Defense Cooperation Agreement with the Philippines, the United States continues to spend what has been described as “budget dust” to assist Southeast Asian partners. While the Senate Armed Services Committee has sought to respond to this weakness through the Southeast Asia Maritime Security Initiative designed to provide $425 million in training, infrastructure construction and vessels for Southeast Asian partners, Congress has thus far only authorized $50 million for FY 2016, rather than the entire five-year program.

Toward A More Central Cornerstone

Given this situation, as well as the common interests of the United States and Japan in addressing regional maritime insecurity, capacity-building represents an ideal area for U.S.-Japan regional cooperation. The United States can take the lead in directly responding to China’s efforts to change the status quo in the South China Sea, including by challenging Beijing’s island-building project. Japan can support regional states by applying its significant capacity-building capability to maritime Southeast Asia, coordinating the various tools at its disposal—such as ODA—toward the common objectives of the alliance. Such an effort would be an application, on a more expansive scale, of the front office/back office concept applied to the U.S.-Japan alliance, with each partner utilizing its comparative advantages.

Simultaneously, both partners should reinforce their overall security position in the region in line with their national-security strategies and the revised defense guidelines, and the United States should continue to pursue a greater commitment toward capacity building in recognition of its absolute advantage in this field. This effort should also be more explicitly coordinated with that of Japan. For example, Japan should be involved in current bilateral capacity-building working groups with Southeast Asian states, such as those established with Indonesia and Vietnam. Such a practice can prevent redundant or contradictory efforts, while maximizing the regional impact of the alliance.

Through coordinating Southeast Asian maritime capacity-building, the United States and Japan can make greater progress toward providing Southeast Asian maritime states with minimum credible deterrence amidst growing Chinese pressure. In doing so, they will be able to demonstrate the value of a U.S.-Japan alliance not just to their own national interests, but to the interests of the region more broadly, building a foundation for this Pacific partnership as a regional problem-solving mechanism.

Taylor M. Wettach is a graduate student at Georgetown University’s Edmund A. Walsh School of Foreign Service, a Harold W. Rosenthal Fellow in International Relations with the Japan Business Federation (Keidanren) and a Pacific Forum CSIS Young Leader. He tweets at @twettach