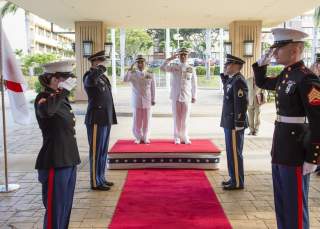 Japan is on its way to strengthening its deterrence through increased military capabilities, along with political reform. Yet its U.S. security relationship needs to be updated for the twenty-first century, especially to address China’s rapid arming and regional ambitions. As Japan reforms its defense policies, it is up to both the United States and Japan to build a Collective Self-Defense strategy with a relatively unobjectionable strategic goal: protecting the interests, territory and the lives of the citizens of our two nations. In order to develop such a strategy, we must address and analyze the development of Japan’s security structure and constitution, emerging threats to security, legislation promoting cooperation, as well as methods for strengthening deterrence.

The years since 2011 brought major changes in Japan’s security structure. Japan’s new National Security Council (NSC), a new and definitive National Security Strategy, new rules governing export of military articles, a defense-budget increase and robust participation in bilateral exercises Dawn Blitz, Iron Fist, Cope North and other achievements infused our alliance with reinvigorated energy and promised enhanced deterrence. The twin capstones are Japan’s 2014 approval of Collective Self-Defense and the creation of new, epochal Alliance Defense Guidelines in 2015 to realize greater capability and greater deterrence. More work remains to be done to fully implement Collective Self-Defense within our alliance. How the United States and Japan will shape the future depends on understanding the issue and what is needed to practically and effectively execute Collective Self-Defense.

The Issue and the Constitution

The concept of foregoing “war” as an instrument of policy—and its extension to foregoing Collective Self-Defense—was further shaped by the emergence of the Cold War between 1945 and 1950. That time featured such historical figures as Emperor Hirohito, General MacArthur, Prime Minister Yoshida, Josef Stalin and Kim Il Sung. Each had a part to play, some for good, some for evil, in shaping this issue. It is topical again as a result of the Japanese government’s 2014 reversal of a 1972 executive decision foregoing Collective Self-Defense and the new 2015 Guidelines for U.S.-Japan Defense Cooperation.

The Japanese Constitution was drafted in 1946 at General MacArthur’s headquarters. It featured rapid staff action and frank exchanges between U.S. and Japanese officials. Indirect but close collaboration between the Supreme Commander and the Emperor helped ensure its acceptance. Perhaps the most critical product of this collaboration was the Emperor’s renunciation of divinity. Thanks to the strengths of Japan’s culture and the coherence of its society, Japan adopted land reform, created labor rights and ended feudalism. This stands in stark contrast to our recent lack of success in helping democracy emerge elsewhere in the world.

The prevailing world view in 1946 shaped all of our activities in Japan. We were barely half a year from the end of the war. The United States was lord of all it surveyed across air, land and sea. The last battle of that war saw the U.S. Navy with over 1,000 ships at the Battle of Okinawa alone. We had sole possession of the atomic weapon. Churchill’s “Iron Curtain” speech was still a month away. The Soviet blockade of Berlin was two years away.

There was a belief that we had seen the last of war. The dream of outlawing war—“renouncing it as an instrument of national policy” as in the Kellogg-Briand Pact of 1928—emerged again. The United Nations promised an elimination of critical League of Nations flaws. After the devastation of the second global conflict in forty years, perhaps we could successfully legislate against a recurrence. Confident of the emergence of an enduring peace underneath our possession of the atomic weapon, convinced that war was now so terrible that it could not happen again, and with nobody left to fight, we quickly sent our forces home, rapidly demobilized and imposed disarmament on Japan.

In this atmosphere, the Japanese Constitution came into force in 1947. Prime Minister Yoshida presented it to the last Imperial Diet and declared that Japan would henceforth depend on the United Nations and renounce war even for the purpose of self-defense.

Article 9 of this document stated:

Aspiring sincerely to an international peace based on justice and order, the Japanese people forever renounce war as a sovereign right of the nation and the threat or use of force as means of settling international disputes.

To accomplish the aim of the preceding paragraph, land, sea, and air forces, as well as other war potential, will never be maintained. The right of belligerency of the state will not be recognized.

As we well know, the 1945-1950 period was unique, not a final destination. It’s been called a “Unipolar Moment,” when the United States stood as the sole undamaged power following the devastation of WWII. In the United States, it was a time of hope and rebuilding amid assumptions of enduring dominance and peace.

But then it became a time of rapidly spreading Soviet influence and subversion of national governments in the midst of chaos. As the threat became clear, our initial response was the Foreign Assistance Act of 1948, or “The Marshall Plan.” This was:

In short order, we were shocked out of our false comfort by the Soviet blockade of Berlin in 1948, the Soviet detonation of an atomic weapon and Mao Tse Tung’s defeat of our wartime ally Chiang Kai Shek in 1949 and the North Korean invasion of South Korea in 1950. Convinced of the need to counter Soviet-backed aggression and fearing Europe was next, President Truman moved to defend South Korea and reinforce our capabilities. Thanks to a Soviet boycott, the UN Security Council lent its new authority to this effort.

Our rapid postwar demobilization now proved to be nearly disastrous. Forces occupying Japan were rushed to Korea. They lacked training, proper clothing and equipment and meaningful numbers. The United States, the unquestioned victor in the greatest war in history five years earlier, was very nearly ejected from the Korean Peninsula and the Asian mainland by an army that did not exist in 1945. Times had certainly changed.

The San Francisco Treaty and the Supreme Court’s Decision

The original U.S.-Japan Security Treaty was signed in 1951, while the outcome in Korea was still very much in doubt. The Cold War was threatening to become “hot” in more places than Korea. In 1952, Japan regained sovereignty over its territory, with the exception of Okinawa. The U.S. occupation ended—again, with the exception of Okinawa—but U.S. forces would remain in Japan for its defense. In 1954, Prime Minister Yoshida created the Japanese Self-Defense Force, despite objections from a split public.

The constitutionality of the Self-Defense Forces and of U.S. Forces Japan made its way to the Japanese Supreme Court in 1959. As often happens, a very pedestrian issue became the agent for a major decision. A Japanese citizen was convicted of vandalizing U.S. Air Force property and the defense appealed by challenging the constitutionality of our treaty. In what became known as the Sunakawa Case, the court ruled that the U.S.-Japan Security Treaty was “not unconstitutional.” It further stated that Article 9 was propagated with a sincere desire for lasting peace by the people of Japan, who, as a result of defeat and militaristic activities committed by the government in the past, firmly resolved that never again shall Japan be visited with the horrors of war through the actions of the Japanese government. Specifically:

It is proper that our country, in the exercise of an inherent national function, be able to take the measures necessary for self-defense so that we can maintain our own peace and security, and preserve our existence. [We] do not maintain what is termed "war potential" in Article 9, but we have determined to preserve our peace and security... Article 9 does not at all prohibit a request to another country for security guarantees for the maintenance of the peace and safety of Japan.

The court’s tightly reasoned judgment drew a clear distinction between war as an instrument of policy and self-defense to protect Japan and its people. The pacifism advocated in the constitution was never intended to mean defenselessness or nonresistance. In other words, Japan’s constitution was not intended to be a suicide pact.